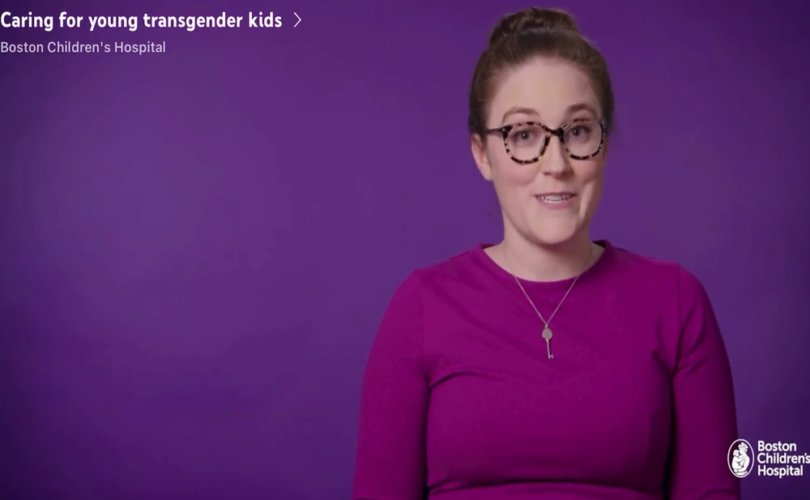 The video, which surfaced in August and has subsequently been scrubbed from the institution’s website and YouTube channel, has once again made headlines as prominent conservatives like Daily Wire commentator Matt Walsh shine a spotlight on major hospitals that perform mutilating surgeries and prescribe sterilizing drugs for minors.

The video features BCH Gender Multispecialty Service (GeMS) psychologist Dr. Kerry McGregor, PsyD, who explained that “most of the patients that we have in the GeMS clinic actually know their gender usually around the age of puberty.”

“But, a good portion of children do know as early as seemingly from the womb,” McGregor added, going on to claim that the GeMS patients “usually express their gender identity as very young children, some as soon as they can talk.”

Twitter users and conservative commentators were quick to point out the irony that BCH would imply that preborn babies in the womb are people, given that the same left-wing political party that promotes transgender ideology also vehemently supports abortion.

This video is totally BS, but it does raise a question for progressives:

If there were a test to reveal whether a baby would be trans in the womb, how would you feel about people systemically aborting all trans people before they were born? https://t.co/1Ibof89gFe

McGregor also explained that BCH employees in the GeMS clinic “see a variety of young children all the way down to ages two and three, and usually up to the ages of nine.”

Children brought into the clinic will meet with a psychologist, who will “be talking to them about their gender.” Psychologists will also speak with the child’s parents “about how to best support that child,” providing the “space” to allow them to “explore their gender.”

McGregor said she usually advises parents to “just be supportive.”

Though the parent “might not understand,” “might not know the terms,” or “get what the child means when they say they might be this gender,” McGregor suggested parents simply love and support their child and “allow them to express themselves.”

According to McGregor, accepting the child’s alleged gender expression “is the biggest protector” against harmful outcomes like anxiety, depression, and suicidality.

Most recently, Vanderbilt University Medical Center in Nashville, Tennessee came under fire thanks to an explosive exposè by Walsh.

Walsh, whose documentary What is a Woman? has helped galvanize the right to defend basic truths about human sexuality, has been waging a crusade against transgender ideology and its destructive pharmaceutical and surgical interventions for minors.

Last month, Walsh reported that Vanderbilt promoted mutilating “gender transitions” for minors as a “huge money maker,” and had promised to punish physicians who objected to the procedures due to religious beliefs, LifeSiteNews previously reported.

Vanderbilt has since announced it is pausing its transgender surgeries for minors and will comply with any regulations imposed upon it by the Tennessee legislature.

UPDATE: here is the letter Vanderbilt sent to state legislators. Notice the wording at the end. They promise to comply with whatever regulations are imposed. They’ve already conceded the legislative fight. This win is even bigger than we thought. pic.twitter.com/VkKhuiHTUO