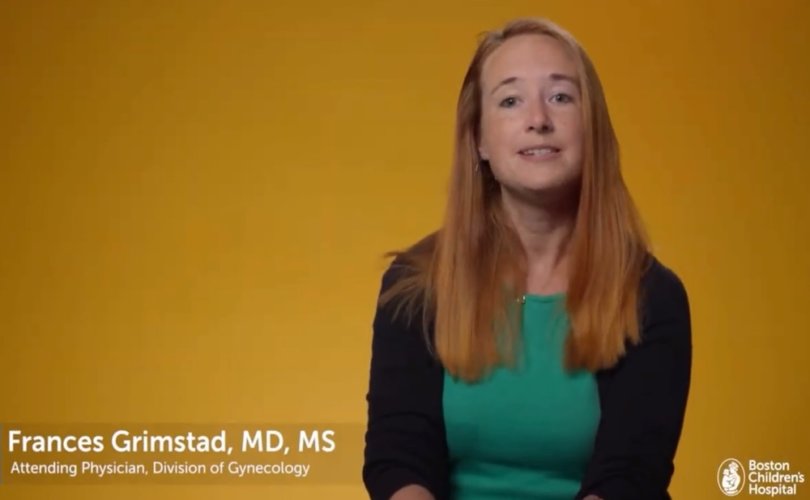 (LifeSiteNews) — Top-rated pediatric medical institution Boston Children’s Hospital has come under fire for a now-viral video in which a cheerful obstetrician glibly promoted the surgical mutilation of young women via “gender-affirming” surgery.

The doctor went on to explain that the ovaries may or may not also be removed during the so-called “gender-affirming hysterectomy.”

It’s unclear whether BCH performs the “gender-affirming” hysterectomies on minors, or only on those aged 18 and up.

The clip promoting the mutilating surgeries was snagged and posted to Twitter by transgender ideology opponent Billboard Chris, and later reposted by popular conservative Twitter profile Libs of Tik Tok. It has since generated well over a million hits.

RELATED: Young woman shares horrific side effects of ‘transitioning’: ‘Wasn’t prepared to have a hysterectomy’

“We have reached a level of barbarism truly unprecedented in the entire history of the human race,” reacted Daily Wire podcaster and author Matt Walsh.

“Major surgery that takes many months to recover from, & which leaves you sterile. That such ops are happening in a children’s hospital is downright evil,” wrote journalist Helen Joyce, who authored the book: “Trans: When Ideology Meets Reality.”

“How can these people live with themselves?” Joyce asked.

Meanwhile, the clip featuring Dr. Grimstad wasn’t the only video from Boston Children’s Hospital to generate backlash among opponents of radical mutilating surgeries.

The segment was among a 90-video YouTube playlist from the top-rated hospital, in which licensed medical professionals addressed topics including “What is a vaginoplasty?” “What is a phalloplasty?” “When does a child know they’re transgender?” and “What are puberty blockers?”

The YouTube playlist has since been removed following outcry.

While some social media users have attempted to argue that the Boston Children’s Hospital videos do not necessarily mean that the hospital is offering invasive and destructive surgical procedures to minors, the institution notes that its Center for Gender Surgery “offers gender affirmation surgery services to eligible adolescents and young adults who are ready to take this step in their journey.”

According to the site, the hospital’s Gender Multispecialty Service is “committed to providing the highest level of individualized, safe, and affirmative care to gender-diverse and transgender individuals and their families,” welcoming patients ranging in age from 3 to 25 years old.

BCH also boasts on its website about having launched “the first pediatric and adolescent transgender health program in the United States.”

Defining gender dysphoria as “a conflict between the gender you were assigned at birth and the gender with which you identity [sic],” BCH says such dysphoria “can create significant distress,” causing people to “feel uncomfortable” in their bodies.

It’s unclear whether BCH performs “gender-affirming” hysterectomies on minors. The hospital did not immediately respond to LifeSiteNews’ request for comment. Politifact has asserted that the surgeries are only done in conjunction with other transgender surgeries available to women over age 18.

Regardless, many have pointed out that even if the surgeries are only performed on individuals over age 18, the procedures permanently destroy women’s bodies, come with serious side effects, and assert a false reality about the nature of human sexuality. Meanwhile, 18-year-olds are barred from a range of less serious activities, including buying alcohol or tobacco products or renting a car.

RELATED: Why are so many children claiming to be ‘trans’?

Journalist and author Abigail Shrier, who published the best-selling book “Irreversible Damage: The Transgender Craze Seducing Our Daughters,” has blasted the push to provide mutilating “affirmative care” for individuals who identify as “transgender.”

According to Shrier, “gender affirming care” is a “devilish euphemism for puberty blockers, cross-sex hormones and experimental surgeries whose benefits are unproven, but whose risks — permanent sexual dysfunction, infertility, cardiac event and endometrial cancer are a few — ought to nudge any doctor toward soul searching.”

This article has been updated to provide additional information.