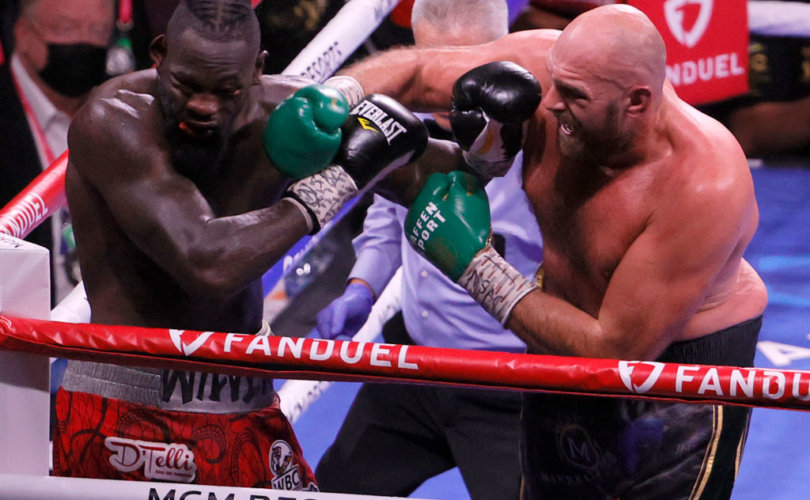 LAS VEGAS (LifeSiteNews) — After winning a stunning victory in a much-anticipated competition for the World Boxing Council (WBC) title Saturday, undisputed heavyweight world champion Tyson Fury gave all the glory to Jesus Christ, saying, “my Lord and Savior rose me to my feet tonight to give Him the glory.”

In what was widely hailed as an incredible fight Saturday night at the packed T-Mobile arena in Las Vegas, Nevada, internationally-acclaimed British boxer Tyson Fury (also known as the “Gypsy King”) held on to his WBC heavyweight title after a suspenseful bout resulting in a definitive knockout of opponent Deontay Wilder in the eleventh round.

Knocked down twice, Fury sent Wilder to the mat three times before an emphatic victory which marked Wilder’s second and final loss to Fury out of a “trilogy” of match-ups between the two heavyweight pros which began with a controversial split decision in 2018.

After the fight, Fury answered questions from interviewers who wanted to know what gave him the strength and motivation to keep going and claim victory after the tense and difficult final fight with a tough and dedicated opponent.

“Walk me through what got you up twice after you had put him down,” the interviewer prompted.

Adorned with his championship belts and wearing a trucker hat that said “Jesus El Rey Viene” (which means “Jesus the King is coming” in Spanish), Fury said, “First of all, I’d just like to say thank you to my Lord and Savior Jesus Christ, the mighty name of Jesus.”

Tyson Fury rocking a Jesus hat after the win 👍🏻

Fury thanks His savior/gives God glory 👍🏻👍🏻

Hard to not root for this guy! @Tyson_Fury pic.twitter.com/QS5Xq4DV7a

Amid rousing applause from the audience, Fury said, “I give Him the glory, He gives me the victory. He made my legs strong. I was down a couple of times. I was hurt. Wilder’s a strong puncher and he’s a tough man. I was hitting him with some big shots and my Lord and Savior rose me to my feet tonight to give Him the glory.”

ESPN has called the match “a spectacular fight and one that will be considered by many as the fight of the year for 2021,” adding that “[t]he hype leading up to the fight has been nothing short of box office entertainment, and the fight was just as sensational.”

“From the ring walks to the action in the ring, this trilogy fight lived up to its lofty expectations,” ESPN said.

Before walking off with his title intact after the impressive slugfest, Fury lauded his opponent as the “second-best” boxer in the world but said his defeated foe refused to show sportsmanship after the match.

The champ said he held no grudges and even promised to pray for Wilder so that God would “soften his heart.”

“It was a great fight and worthy of any trilogy in the history of the sport. I’m not going to make any excuses, Wilder is a top fighter, he gave me a real run for my money tonight and I’ve always said I’m the best in the world and he’s the second-best.”

“I’m a sportsman, I went over to him to show some love and respect and he didn’t want to give it back,” Fury said. “That’s his problem. I will pray for him so God will soften his heart.”

Saturday night’s fight was not the first time Fury has spoken out about his faith and convictions.

The heavyweight champion has often talked about his faith and its impact on his career, saying boxing is his way of using his God-given abilities, while crediting God with giving him strength to get back up and keep going during tough fights.

In a 2015 interview Fury told Catholic News Live, “I pray for my opponents before fights, praying that they are strong and healthy and put up a good fight, but I’m doing a job like everyone else.”

“It tells us in the Bible we need to work, and boxing is just a sport at the end of the day,” he said.

Fury told the outlet he tries “to go to church every Sunday and I read the Bible quite a lot, although not as much as I should do. It gives me strength to know that if God is in my corner then no one can beat me.”

In 2018 after his first fight with Wilder, Fury said he didn’t know how he found the strength to get up after a twelfth-round knockdown, but that “I had a holy hand upon me, that brought me back, and I’ve got a fighting spirit and I never say die, I get back up.”

Beyond praising God for helping him win boxing matches, Fury has also stated his views on morality, drawing the ire of the mainstream press in 2015 when he decried homosexuality, abortion, and pedophilia and expressed his belief that the growing evil throughout the culture signals the coming end of the world.

“There are only three things that need to be accomplished before the Devil comes home,” the boxing champ added. “One of them is homosexuality being legal in countries, one of them is abortion and the other one’s paedophilia. Who would have thought in the 50s and 60s that those first two would be legalised?”

After being attacked by the media for making supposedly “homophobic comments,” Fury denied the allegations, saying he was misquoted. “I don’t have any hate for anybody,” Fury said. “I’m not homophobic, I’m not racist and I’m not against any people. All I have for people is love because at the end of the day we are all brothers and sisters in God.”

Fury has faced serious personal challenges throughout his life, including a bipolar diagnosis, anxiety, depression, and substance abuse, but has repeatedly spoken about the work of God in helping him overcome his difficulties.

“I have been unwell all my life,” he told i.News. “Some days I felt like I didn’t want to live anymore but I thought that was normal. But clearly it’s not. I believe you can never get over mental health never. But you can learn to maintain it.”

“It is a hard thing to do and not as easy as people think,” the world champ added. “Not everyone is going to go to heaven and I hope I am one of the select few who are.”