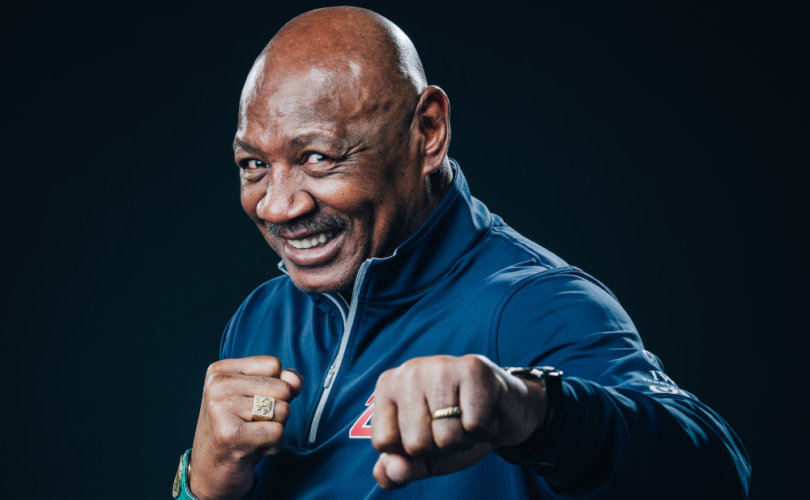 March 23, 2021 (LifeSiteNews) — Celebrated middleweight boxing champion Marvelous Marvin Hagler died suddenly on March 13 at the age of 66, after his health deteriorated in the days following a COVID-19 vaccine injection.

Speculations about the cause of Hagler’s death were raised after old boxing rival Thomas Hearns (often called The Hitman) hinted it may be related to the jab. In a since-deleted Instagram post, Hearns detailed the late boxer’s admission to hospital after receiving the injection: “A real true warrior … Pray for the king and his family … He’s in ICU fighting the after effects of the vaccine! He’ll be just fine but we could use the positive energy and [p]rayer for his [f]ull [r]ecovery !”

About four hours later, Hagler’s wife Kay announced on Facebook that he had died “unexpectedly at his home here in New Hampshire. Our family requests that you respect our privacy during this difficult time.”

Hagler’s death was confirmed in a statement on his website, which merely said that he had died of “natural causes.”

Given Hagler’s public profile, social media was set alight with the news of his passing. Hearns’ Instagram post gained a lot of traction, too, leading him to supply a follow-up message, attempting to quell suspicions arising from his previous suggestion that the jab may have contributed to Hagler’s demise: “Allow us to have our peace. Our love and respect to Marvin and his family, this is not an anti[-]vaccine campaign … It’s outrageous to have that in mind during the passing of a King, Legend, Father, Husband and so much more.”

Hagler’s wife also took to social media to try and dissuade people of any connection between the inoculation and her husband’s death. Writing on the “Marvelous Marvin Hagler Fan Club” Facebook page, she said she was “the only person close to him until the last minute” and that “not even his family know all the details” of the end of her husband’s life.

“I do NOT accept to read some stupid comment without knowing really what happen [sic],” she continued, referring to the speculation around the cause of death.

“For sure [it] wasn’t the vaccine that caused his death. My baby left in peace with his usually [sic] smile and now is not the time to talk nonsense,” she said, before announcing that there will be no funeral for the celebrity fighter, apparently in accordance with his wishes.

Hagler joins a slate of high profile personalities who have suffered injury or death shortly after receiving one of the COVID jabs, including baseball hero Hank Aaron and Australian Health Minister Greg Hunt.

Aaron, of Atlanta Braves fame, died January 22, two weeks after receiving his first shot of the COVID jab developed by Moderna. The 86-year-old was part of a public push for vaccine uptake, apparently to encourage Black Americans to come forward for the shot.

“I don’t have any qualms about it at all, you know. I feel quite proud of myself for doing something like this … It’s just a small thing that can help zillions of people in this country,” Aaron said at the time.

Earlier this month, Hunt was hospitalized with a severe case of cellulitis, just two days after receiving his first dose of the abortion-tainted AstraZeneca coronavirus shot. Australian Prime Minister Scott Morrison dismissed concerns around Hunt’s health, saying, “He’ll be fine by next week, he’ll be back up on his feet.”

Hunt’s office was quick to deny any connection between his condition and his recent jab, saying his recent ill health is “not considered to be related to the vaccine,” but medical research into cellulitis following various vaccines including Pneumococcal, Influenza, and DTaP is well-documented.

Additionally, the Australian government is cracking down on any dissent within the medical profession regarding the national vaccination program, including “regulatory action” from the country’s medical watchdog Australian Health Practitioner Regulatory Agency (AHPRA).

“There is no place for anti-vaccination messages in professional health practice, and any promotion of anti-vaccination claims including on social media, and advertising may be subject to regulatory action,” spokesman for the medical boards and Pharmacy Board chairman Brett Simmonds said.

1,524 deaths were reported, 259 of which occurred in the week leading up to March 5. Of the reported deaths, 30 percent occurred within 48 hours of receiving the jab.

In the U.K., for instance, the latest updates to the nation’s “Yellow Card” reporting on potential side effects arising from the Pfizer/BioNTech and the Oxford/AstraZeneca injections were released on March 11.