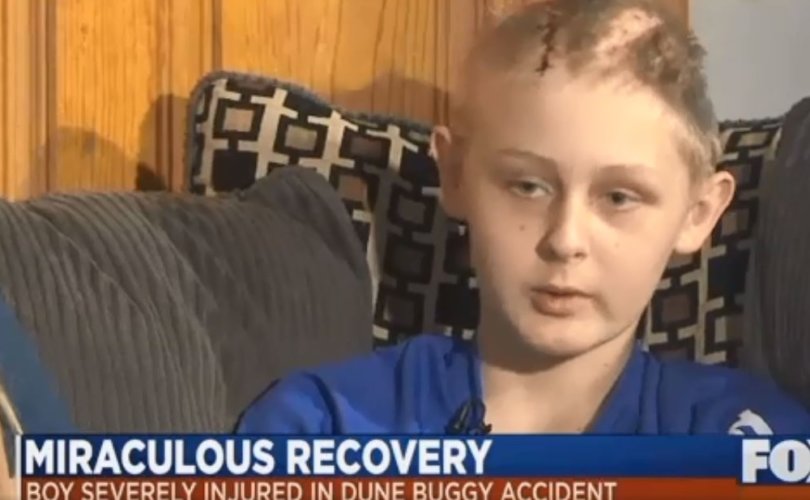 May 8, 2018 (LifeSiteNews.com) – An Alabama child who suffered multiple skull fractures in an auto accident and was declared “brain dead” by doctors, regained consciousness only one day before the physicians planned to remove his organs, according to a report by Fox News in Mobile, Alabama.

The boy, 13-year-old Trenton McKinley, was being pulled in a small utility trailer by a child’s dune buggy driven by his friend, who applied the brakes suddenly and caused the trailer to flip over and to land on top of McKinley’s head, fracturing his skull.

McKinley “died” several times while doctors treated him, leaving him “dead” for a total of 15 minutes, according to the child’s mother, Jennifer Reindl, who added that doctors then informed her that her son’s case was hopeless, and that he could never recover. Medical personnel then proposed that his organs be donated to save the lives of five other children. Reindl implied in her statements to reporters that her acceptance of the organ donation plan was the only way to convince them to keep her son alive longer.

“When he came back, they said he would never be normal again,” Reindl told local Fox station WALA-TV. “They told me the oxidation {oxygen deprivation} problems would be so bad to his brain, that he would be a vegetable if he even made it.”

“A man from the UAB organ donation came and talked to us in the family conference room about donating five organs to UAB children's hospital that would save five other children,” Reindl told CBS News. “We said yes, that also insured that they would continue to keep Trenton alive to clean his organs for the donation,” Reindl added.

However, as doctors kept McKinley alive in preparation for his organs to be removed and given to others children, the boy began to regain consciousness. He gradually recovered, and appears to have the full use of his mental faculties, although he also suffers from seizures. Now, two months later, he is awaiting the reattachment of about half of his skull.

McKinley says he remembers being in heaven. “I was in an open field walking straight,” he said to WALA-TV, adding, “There's no other explanation but God. There's no other way. Even doctors said it.”

His mother concurs that a miracle saved her son. “From no brainwaves to now walking and talking and reading, doing math. A miracle,” she told CBS.

His family is seeking donations for Trenton McKinley’s ongoing treatment and associated costs.

The concept of “brain death” is a vaguely-defined and controversial one, and hospitals often disagree on its definition and on the tests necessary to determine it. The term was introduced in 1968 for the purpose of justifying organ transplants, which usually involve the removal of vital organs from a person who is still breathing and has a heartbeat, or whose ventilator has been shut off only seconds before.

Dr. Paul Byrne, an experienced neonatologist, clinical professor of pediatrics at the University of Toledo, and president of Life Guardian Foundation, told LifeSite in 2011 that doctors are generally aware of the fact that transplant donors are not really dead when their organs are removed.

“All of the participants in organ transplantation know that the donors are not truly dead,” Byrne told LifeSite.  “How can you get healthy organs from a cadaver? You can’t.”

Byrne told LifeSite that giving pain medication to organ donors is a routine procedure.  Doctors taking organs from “brain-dead” donors “have to paralyze them so they don’t move so when they cut into them to take organs, and when they paralyze them without anesthetics, their heart rate goes up and their blood pressure goes up,” said Byrne. “This is not something that happens to someone who’s truly dead,” he added.

A video documentary regarding the problematical nature of organ donation and the ambiguities of “brain death” has been produced by Life Issues Institute, called “Surprising Realities of Brain Death and Organ Donation”:

The case of Trenton McKinley’s recovery from “brain death” is one of many examples of such cases reported by LifeSite in recent years.

In 2015, George Pickering Sr. saved his son from death when he held off hospital staff with a firearm in order to buy his son more time to prove that his diagnosis of “brain death” was false.  The hospital had informed Pickering that his son, George Pickering Jr., would soon be removed from life support, and the staff had already begun preparing to “donate” his organs. After a three-hour standoff with authorities, Pickering’s son began squeezing his hand, and Pickering Sr. surrendered. His son fully recovered.

In 2014, 40-year-old Jenny Bone awoke from a medically-induced coma and revealed that she hadn’t been in a “persistent vegetative state” as doctors had claimed, and in fact had listened to them discuss the removal of her life support. The doctors had admitted to her husband that they didn’t know what was wrong with her, but had claimed she was “unresponsive.”

In 2013 a “brain dead” woman who was about to have her organs removed opened her eyes on the operating table, saving her life. Although nurses had done a number of tests and made several observations that indicated that the woman was reactive and conscious, their reports to doctors appeared to have been ignored.

In 2012, a teenager named Stephen Thorpe who had been injured in a car wreck was declared “brain dead” by British National Health Service physicians after they had placed the child into a medically-induced coma. They then began to pressure Thorpe’s father to grant permission to remove his organs for donation. Thorpe’s father had a sense they were wrong, and enlisted the help of a neurologist, who observed that Thorpe still had brain waves. The physicians agreed to bring Thorpe out of the coma, and two weeks later he regained consciousness.

In 2011, the Quebec Hospital Sainte Croix de Drummondville sought permission to extract the eyes of a patient who had choked on hospital food in the absence of a nurse, claiming she was “brain dead.” After the family demanded proof from physicians of her alleged condition, she regained consciousness, and recovered most of her faculties. The family declared its intention to sue the hospital.

They were about to pull the plug on me, when the Archangel Michael saved my life