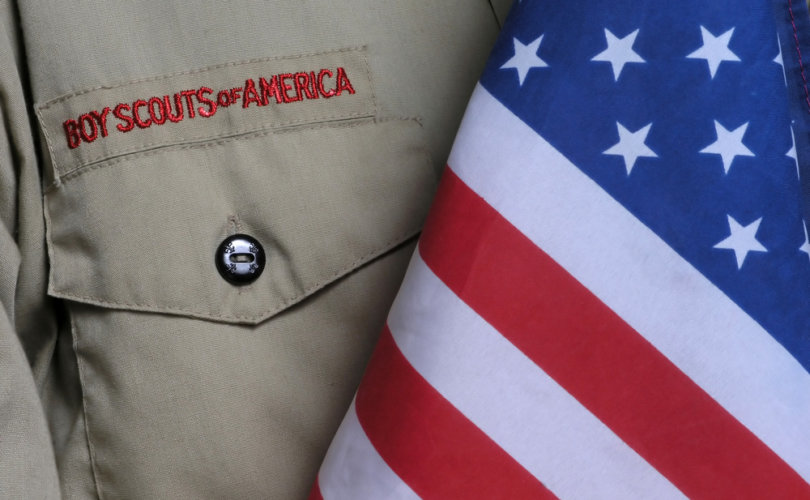 This latest pro-LGBT shift in the nation’s oldest boys organization comes after the BSA first allowed openly homosexual boys to become Scouts, in 2013, and then allowed adult homosexual men to become Scoutmasters, in 2015.

The Scouts’ descent into sex-and-gender political correctness is driving up interest in Trail Life USA, the leading Christian alternative to the BSA. The group’s CEO told LifeSiteNews that unlike the Scouts, Trail Life USA’s “timeless,” “Christ-centered” core values do not bend to liberal shifts in culture.

In a statement, the Boy Scouts said, “Starting today, we will accept and register youth in the Cub and Boy Scout programs based on the gender identity indicated on the application. Our organization’s local councils will help find units that can provide for the best interest of the child.”

The statement noted that for more than 100 years, the Scouts “have ultimately deferred to the information on an individual’s birth certificate to determine eligibility for our single-gender programs. However, that approach is no longer sufficient as communities and state laws are interpreting gender identity differently, and these laws vary widely from state to state.”

Pro-family and Christian conservative reaction was immediate to what is perceived as the BSA’s latest capitulation to the Left.

“The Boy Scouts of America sacrificed its last vestige of integrity on the altar of political correctness,“ writes conservative Fox News commentator Todd Starnes. “The BSA is also going to face some logistical issues. Will boys and girls be allowed to shower together? Will they be allowed to use the same camp dressing rooms? What sort of restroom accommodations will be provided for transgender scouts?”

“This is Exhibit A of the insatiable demands of those pushing this sexual anarchy,” Family Research Council president Tony Perkins told Starnes.

“This political surrender to intolerant, doctrinaire leftists harms the girls who seek to become Boy Scouts in order to reinforce their false belief that they're male,” said Laurie Higgins, cultural issues writer with Illinois Family Institute. “It also harms boys in that it teaches them the lies that one's sex has no intrinsic meaning and that in order to be compassionate they must relinquish their privacy.”

Meanwhile, the homosexual-bisexual-transgender lobby group Human Rights Campaign celebrated the new BSA policy: “This marks a significant policy shift, and will allow transgender boys whose parents cannot change or have not changed their son’s gender on their birth certificate. … The news today comes as one New Jersey family has been fighting back after their son, an 8-year-old boy, was kicked out of the Cub Scouts because he is transgender.”

An Alternative to the BSA Is Growing

Linda Harvey, founder of the Ohio-based Christian group Mission America and a conservative expert on the LGBTQ agenda and youth, told LifeSiteNews: “The Boy Scouts of America continues to be oblivious to the realities of the emotional disturbance of gender rebellion in kids. The presence of these confused children in any troop is a risk to all the boys present, setting an example that can have tragic consequences.”

Mark Hancock, CEO of Trail Life USA, formed in 2013 in direct response to the BSA relaxing its moral opposition homosexuality—echoed that sentiment in an interview with LSN. Trail Life USA is three years old and has 26,000 members in 48 states. Its network includes 700 participating churches.

Hancock said he was “saddened” by the BSA’s embrace of “transgendered” members, and is concerned about its effects on boys, “psychologically, spiritually, and possibly even physically.”

He also voiced concern over the biologically female “transgender boys” who “could be subjected to compromising situations” under the new Boy Scout policy.

Hancock said he was surprised by how speedily the Scouts’ leadership endorsed the entire LGBT agenda, noting they were under no legal compulsion to do so. (The BSA’s initial capitulation on homosexuality essentially wasted its hard-fought 2000 Supreme Court victory in BSA v. Dale, which upheld the BSA’s constitutional right as a private organization to set its own membership standards excluding self-avowed homosexuals and atheists.)

“We thought they were braver than that,” he told LifeSiteNews.

Despite the claims by Scouts’ chief executive Michael Surbaugh that the organization still adheres to its old values, which include being “morally straight” and “reverent,” Hancock said, “We see how they have been redefining [Scout values] to accommodate the culture.”

In contrast, Trail Life USA adheres to “true, timeless values” rooted in the Bible, he said, as laid out in a Statement of Values: “God calls us to lives of holiness, being pure of heart, mind, word and deed. We are to reserve sexual activity for the sanctity of marriage, a lifelong commitment before God between a man and a woman.”

He said Trail Life USA’s executive leaders originally used the word “boys” to define their eligible members, but then changed that to “biologically male children,” foreseeing just the sort of “transgender” pressure that led to the BSA’s shift.

Trail Life USA founder and Board chairman John Stemberger, a veteran Florida pro-family activist, said, “It’s simply stunning that a leading youth organization which parents entrust the protection of their children with has opted to again appease political activists rather than follow clear, common-sense best practices for child protection.”

“Aside from the fact they are now going to confuse literally hundreds of thousands of young men and boys – you are now going to have further youth protection problems,” Stemberger told Fox News’ Starnes. “Facilities and campgrounds are not designed for this type of thing.”

Hancock said Trail Life USA gets a big jump in inquiries and interest with each politically correct maneuver by the Boy Scouts.

“Our website was struggling” yesterday, he told LifeSiteNews, adding that those interested in starting a TrailLifeUSA chapter should go to the organization’s website, which Tuesday had a special notice about “high volume.” The group can be reached by calling 321-247-7761 or emailing: [email protected]; see also its “How to Charter a Troop” page.