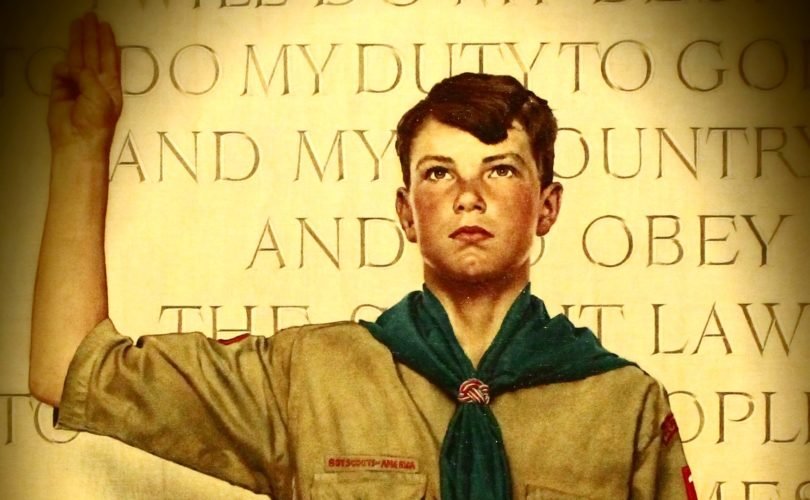 May 22, 2015 (LifeSiteNews.com) – Boy Scouts of America president Robert Gates says the youth organization must change with the times and allow open homosexual men to serve as Scout leaders.

Gates, the former U.S. Secretary of Defense and CIA Director, said in a speech at the 2015 Boy Scouts of America (BSA) National Annual Meeting Thursday that the Boy Scouts would have to adjust to “the social, political, and juridicial changes taking place in our country — changes taking place a pace this past year no one anticipated.”

According to Gates, the way to balance the religious affiliations of “some 70% of our scout units” and avoid “a broad [court] ruling that could forbid any kind of membership standard” is to offer individual troops a flexible membership policy.

“For me, I support a policy that accepts and respects our different perspectives and beliefs, allows religious organizations — based on First Amendment protections of religious freedom — to establish their own standards for adult leaders, and preserves the Boy Scouts of America now and forever.”

“I truly fear that any other alternative will be the end of us as a national movement,” said Gates, who said that BSA should “seize control of our own future, set our own course, and change our policy in order to allow charter partners — unit sponsoring organizations — to determine the standards for their Scout leaders.”

This is not the first time that Gates, who led the military to end its two decades-long Don't Ask, Don't Tell policy, has supported gay Scout leaders. Last year, he said that he “would have supported having gay Scoutmasters, but at the same time, I fully accept the decision that was democratically arrived at by 1,500 volunteers from across the entire country.”

In 2013, BSA allowed openly homosexual scouts for the first time. That policy reads: “No youth may be denied membership in the Boy Scouts of America on the basis of sexual orientation or preference alone,” and took effect on January 1, 2014.

A year ago, Gates said he “was prepared to go further than the decision that was made” to allow gay Scout members, but decided that “to try to take last year's decision to the next step would irreparably fracture and perhaps even provoke a formal, permanent split in this movement – with the high likelihood neither side would subsequently survive on its own.”

This week, though, Gates said that “events during the past year have confronted us with urgent challenges I did not foresee and which we cannot ignore.”

“We cannot ignore growing internal challenges to our current membership policy, from some councils… in open defiance of the policy,” said Gates.

However, Gates' remarks may have come too late to prevent internal challenges from splitting BSA. Due to the 2013 vote, a number of Scouting alternatives launched, including the organization Trail Life USA. The latter group says it aims “to be the premier national character development organization for young men which produces Godly and responsible husbands, fathers, and citizens.”

In January, Trail Life USA said it has “over 540 Troops in 48 states and the registration of nearly 20,000 adults and boys…”

Furthermore, the decision by BSA to allow gay scouts has led to criticism from people on both sides of the debate. Homosexual activists say the group did not go far enough, whereas many Christian parents and organizations say BSA is bowing to public pressure from homosexual advocates to affect its membership, despite its Christian roots.

Corporate pressure has also been aggressive. Last year, Walt Disney World threatened to not allow employees to volunteer for BSA as part of its VoluntEARS program in 2015 if the organization does not allow gay Scout leaders. Diversity Inc. reports that Merck & Co., Ernst & Young, Major League Baseball, and AT&T are just some of the other companies that have pressured BSA to further change its policies.

LifeSiteNews asked BSA whether Gates' comments indicated support for a totally flexible scout leadership policy, or just related to gay scout leaders, as well as whether BSA would take a stand against state and local laws that deny First Amendment rights to people who oppose same-sex “marriage.”

BSA declined to comment, telling LifeSiteNews in a statement: “Dr. Gates’s remarks speak for themselves. … It is important to note that no decisions were made during the National Annual Meeting. A decision is expected no later than the Boy Scouts of America’s National Executive Board meeting in October.”

A video of Gates' remarks is below. The comments about membership standards begin at 8:40.