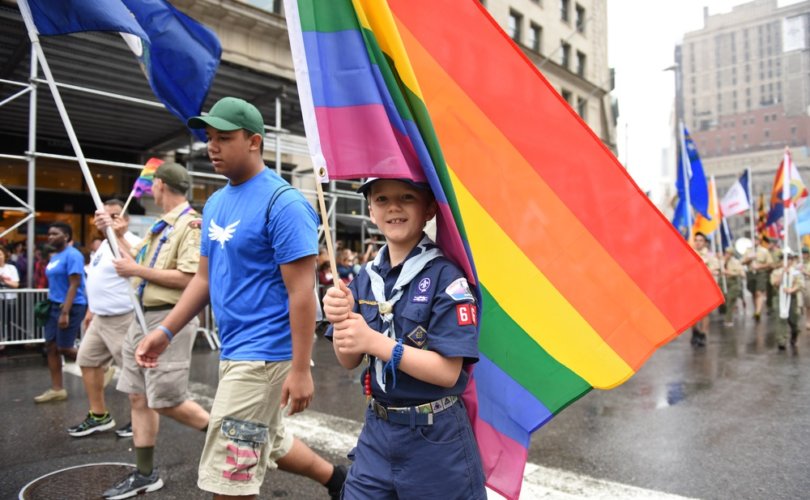 GLEN JEAN, West Virginia, May 22, 2018 (LifeSiteNews) – A gathering of scouts from all over the world slated for next summer and hosted by big names such as Boy Scouts of America and Scouts Canada will include condoms that must be “readily and easily accessible for all participants” of any age.

The World Organization of the Scout Movement (WOSM) has announced that its 24th World Scout Jamboree will be held from Sunday, July 21, 2019 to Thursday, August 1, 2019. It will be the first to be jointly hosted by all three umbrella organizations covering North America: Scouts Canada, the Boy Scouts of America, and Asociación de Scouts de México.

Billed as a “celebration of cultural exchange, mutual understanding, peace, and friendship,” the announcement promises that the gathering of thousands of young people from more than 200 countries and territories will open “a new world of life-changing experiences that will help you develop your physical, intellectual, emotional, social, and spiritual life.”

But many fear that “new experiences” will take on an alarming new meaning this time.

Page 11 of the WOSM’s 2016 jamboree guidelines states that the “Host Organisation must ensure that condoms are readily and easily accessible for all participants and [International Service Team] at a number of locations on the site,” and that in informing personnel about the policy, “consideration shall be given to the various cultures and beliefs present.”

“It appears the Jamboree guidelines were drafted after the 2015 World Jamboree in Japan in preparation for the 2019 event and were just recently released in an email,” the Florida Family Policy Council (FFPC) states. The guidelines also allow for alcohol consumption in “confined areas.”

FFPC president John Stemberger, who is also chairman of the board for Christian scouting alternative Trail Life USA, said that these “deeply disturbing” changes make the event “sound more like a 1960s Woodstock festival rather than a campout that parents would want to send their children to.”

“These policies present a clear youth protection problem that the BSA absolutely refuses to recognize,” Stemberger continued. “The fact that they are requiring that condoms be ‘readily accessible’ and are communicating this to everyone– including youth participants–shows that the BSA is both anticipating and facilitating sexual conduct between minors at this event.

Nina Bookout of the conservative Victory Girls blog notes that the condom mandate contradicts the Boy Scouts’ official oath and Scouts Law to keep oneself “morally straight,” “reverent toward God,” and “faithful in your religious duties.”

“And with that, I know that sadly many will just shrug their shoulders and say – boys everywhere are sexually active now – it’s no big deal,” Bookout lamented. “Yes, it is a big deal.”

The Boy Scouts’ apparent acceptance of the condom policy is the latest in a list of deviations from the moral traditions that were once synonymous with the organization. The BSA began allowing openly-homosexual boys to join in 2013, openly-homosexual adult leaders in 2015, and transgender members in 2017. Earlier this month, the organization announced that their main scouting program will be renamed simply “Scouts BSA” and accept girls, as will its Cub Scouts program for children aged nine and younger.

Liberty Counsel founder and chairman Mat Staver said that any churches chartering Boy Scout troops to the event “should be outraged that it is encouraging minors to participate in sexual conduct and consume alcohol.” He called on every church to “immediately dissociate” with the Boy Scouts and instead consider partnering with Stemberger’s Trail Life USA.

The increasing liberalization of the Boy Scouts and the Girl Scouts has given rise to a number of conservative Christian alternatives in recent years, including Trail Life and American Heritage Girls. Earlier this month, the Mormon Church also announced it would be terminating its association with all Scouting programs worldwide, and launching a new youth program of its own next year.