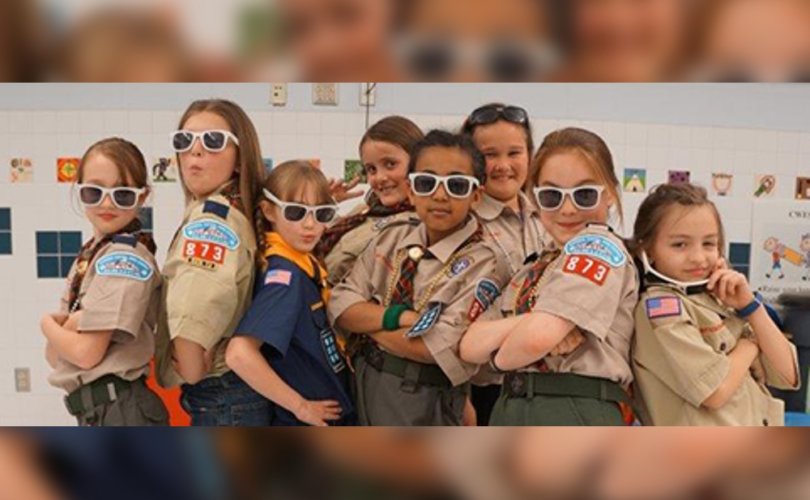 May 2, 2018 (LifeSiteNews) – The Boy Scouts of America’s main program won’t be called “boy scouts” anymore, the organization announced as it prepares to accept girls and launch a campaign focused on “inclusiveness.”

The Boy Scouts of America will continue calling its younger members “Cub Scouts” – that program will also accept girls – and will call its hallmark “Boy Scouts” program for males aged 10-17 a more gender-neutral “Scouts BSA.”

Younger members will still be called “Cub Scouts” and older members will simply be “Scouts.” Scouts BSA, for now, will allegedly not have any mixed-gender, or coed, troops. The organization’s primary name will continue to be “Boy Scouts of America.”

“Just as before, these Scouts will earn merit badges, go camping and work toward the Eagle Scout Award,” a blog for adult Boy Scout leaders announced.

The “Scout Me In” campaign “reinforces that the mission and core values in the Scout Oath and Scout Law are welcoming, inclusive and foundational for both young men and women,” the BSA said in a press release.

“As we enter a new era for our organization, it is important that all youth can see themselves in Scouting in every way possible. That is why it is important that the name for our Scouting program for older youth remain consistent with the single name approach used for the Cub Scouts,” said Michael Surbaugh, Chief Scout Executive of the Boy Scouts of America. “Starting in February 2019, the name of the older youth program will be 'Scouts BSA,' and the name of our iconic organization will continue to be Boy Scouts of America.”

“Cub Scouts is a lot of fun, and now it's available to all kids,” said Stephen Medlicott, National Marketing Group Director of Boy Scouts of America. “That's why we love ‘Scout Me In’ – because it speaks to girls and boys and tells them, ‘This is for you. We want you to join!’”

The Boy Scouts began to allow openly gay male leaders in 2015, raising questions about how a troop based at a Catholic parish, for example, could remain faithful to both Catholicism and the scouting rules. The Boy Scouts also allowed gender-confused girls to join before opening their program to all girls.

Denver Archbishop Samuel Aquila announced last year that his diocese would only allow biological males and leaders who adhere to the Catholic Church's moral teachings to participate in its parishes' Boy Scouts troops.

Also in 2017, Archbishop Joseph Naumann of Kansas City, Kansas – now head of the U.S. bishops’ pro-life office – announced his diocese would cut ties with the Girls Scouts of America over the organization’s connections to abortion company Planned Parenthood.

In 2015, the Archbishop of St. Louis cut with the Girl Scouts over similar concerns.

The Girl Scouts’ promoting of and partnering with pro-abortion organizations is well-documented.

“The World Association of Girl Guides and Girl Scouts (WAGGGS) currently advocates for contraception and ‘abortion rights’ on behalf of its girl members, the majority of whom are minors,” reports the watchdog organization Girl Scouts, Why Not?

Girl Scouts: Planned Parenthood’s founder is among ‘most inspiring … women in American history’