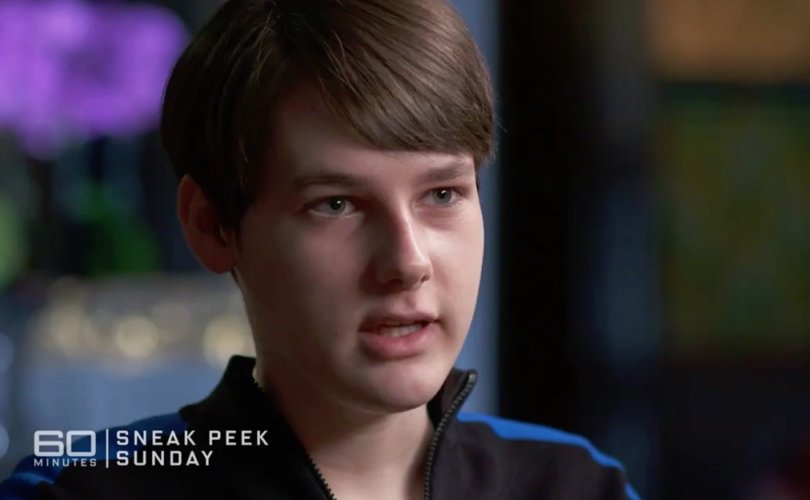 September 8, 2017 (LifeSiteNews) – A boy who began transgendering himself to be more like a girl when he was 12 has changed his mind just two years later.

Patrick Mitchell's story will be on Australia's 60 Minutes on Sunday. He gave an interview to Women's Day explaining how being called a “girl” actually made him realize he was comfortable as a boy.

He will now be undergoing surgery to remove breast tissue that grew as a result of him taking estrogen.

“I felt like I was on the right track to becoming a girl,” Mitchell told 60 Minutes.

But earlier this year, being referred to as “one of the girls” made him realize “I was actually comfortable in my body.”

“Every day I just felt better,” he said.

“I was a trans kid myself,” Walt Heyer, founder of SexChangeRegret.com, told LifeSiteNews via email. “This story about Patrick is more proof the trans-activists doctors have no way to prove who the trans-kids are and who are not.”

But they have no problem going “recklessly forward with treatments.”

“What we do know is through persistent, frequent affirmation by parents, doctors and schools we can make kids think they are transgender,” said Heyer. “When there is overwhelming support of cross gender identities any child will eventually develop symptoms of gender dysphoria. Patrick was fortunate because he 'came out' and acknowledged he was comfortable in his boy body.”

“I knew his thoughts had caught up with his body,” the boy's mother said. She brought up transgenderism with him when he was 12 and he responded very positively to the suggestion that they see a doctor about it.

“Your boy's got breasts,” a 60 Minutes anchor says to her in a preview of Sunday's episode.

According to media reports, Patrick's mother was supportive of both his “transition” to female and now his embracing of his biological sex.

“Kids should not be subjected to constant affirmation or medically induced cross-gender treatments until age 18,” said Heyer. “At that time then they should be required to undergo psychological evaluations to determine if untreated comorbid psychological disorders are causing the young person identifying as transgender.”

His said disorders like body dysmorphic disorder, bipolar disorder, dissociative disorder, depression, anxiety, and Asperger's Syndrome are “linked to cross-gender identities.” But none of them “require hormone blockers or a change of gender as part of their treatment.”

Great Britain's youngest-ever patient to undergo a “sex change” at just 15 “transitioned” back to living as a male when he was 18. Now 23, he is once more “transitioning” back to a woman.

“I hope I will finally be happy,” he said in August.