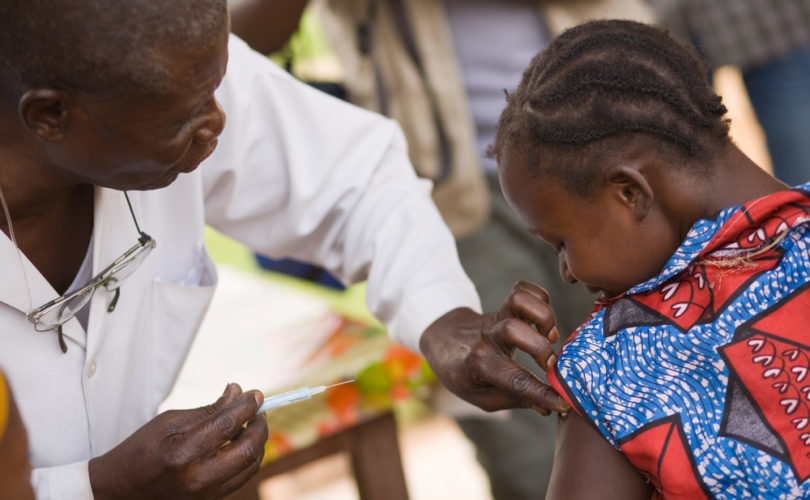 Aug. 3, 2015 (LifeSiteNews) – Kenya’s Roman Catholic bishops have called for a boycott of a wide scale polio vaccination campaign, amid reservations over the vaccine’s safety.

The manufacturer did not provide requested information pertaining to safety, the bishops say, and the government disregarded their request for tests.

The oral vaccination drive, sponsored by the World Health Organization and UNICEF, was scheduled to commence August 1, according to the Religion News Service.

“We are not fighting anybody, but we are saying let us determine our destiny,” said Cardinal John Njue, bishop of Nairobi. “The moment things (vaccines) are formulated from outside and there are problems, it is our people who suffer. That’s why we are voicing this issue.”

Bishop Paul Kariuki, the chairman of the bishops health committee, said the Kenyan bishops are not against immunization programs, but simply wish to ensure the safety of the vaccines.

Kenya’s bishops cried foul on an alleged government sterilization campaign last year, when they said that tests found a miscarriage-causing antigen concealed in an anti-tetanus vaccination. Adding to the concerns was that the campaign targeted Kenyan women of childbearing age and left out boys and men and younger girls who were also at risk from tetanus infection.

The vaccine allegedly containing the sterilization drug also came from the WHO and UNICEF.

At the time, the bishops told the faithful to avoid the vaccine campaign, and they expressed continued concern earlier this year and insisted that no mass vaccination campaigns occur again in Kenya unless the vaccinations have been appropriately tested and proven safe.

The Kenya Catholic Doctors Association was the group that raised the alarm about problems with last year's Tetanus campaign, bringing it to the Kenya’s Catholic bishops’ attention, and urging Kenyans to heed the bishops in the matter.

A recent incident where roughly 30 children in western Kenya injected with an anti-malarial drug reacted with apparent paralysis added to the bishops' concerns over the polio vaccine, with the bishops questioning the contents of the injection in that case as well.

Kenya’s Ministry of Health issued a July 28 statement in defense of the polio vaccine, specifically countering the country’s Catholic bishops in the matter.

“Any attempts aimed at mobilizing the public against taking their children for vaccination is a serious violation of the right of children to health and survival,” Doctor Nicholas Muraguri, director of Kenya’s Medical Services, said in the statement. “The ministry of health once again reassures the public of the safety of all vaccines used in Kenya. I therefore appeal to all stakeholders, especially the leadership of the Catholic Church, to continue supporting” the immunization campaign in Kenya.

But the bishops have not wavered.

“We are not in conflict with the Ministry of Health, but we have an apostolic and moral duty to ensure Kenyans are getting safe vaccines,” Kenya Conference of Catholic Bishops Chair Bishop Philip Anyolo said at a Nairobi news conference.

Pro-life supporters and advocates for ethical vaccines in the U.S. praised the Kenyan bishops’ move to safeguard the Kenyan people.

Children of God for Life President Debi Vinnedge pointed to an article she recently read where the author stated that, “To be pro-life and to be pro-science is to be pro-vaccine.”

“In the case of the good people in Kenya who were unknowingly sterilized and as a result, the bishops report many have lost their babies, I think it's safe to say pro-vaccine is a far-cry from being truly pro-life,” Vinnedge told LifeSiteNews. “I don't know a single pro-life person who doesn't want protection from dangerous diseases, but that must not come at the cost of another human being's life.”

“It is gratifying to know that once again, as they did with the Tetanus vaccine that was tainted, the Kenyan Bishops are shining a light in the darkness,” Brown said. “While it is not surprising that the government ignores the requests the Bishops make, it is heartening to know that these courageous Bishops will not give up! God bless them.”

The real war on women: stealth sterilization in Kenya