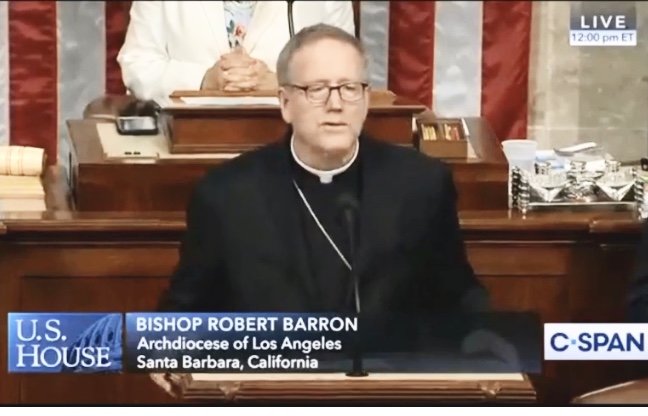 WASHINGTON, D.C., November 6, 2019 (LifeSiteNews) — There’s no denying that Bishop Robert Barron, auxiliary bishop of the Archdiocese of Los Angeles, is a popular figure both inside and outside the Catholic Church.

Aside from his calm manner of speaking and encyclopedic knowledge — good luck trying to find an interview where he doesn’t quote C.S. Lewis or St. Thomas Aquinas — his ability to discuss a wide variety of issues non-Catholics (and especially non-believers) hold important has won him admiration from many who do not follow Jesus Christ.

But there are many question marks that surround Barron’s smooth-talking brand of New Evangelization. His prayer last Wednesday on the floor of the U.S. House of Representatives was the latest instance of that. Watch below:

The bishop’s failure to make the sign of the cross, or even mention Jesus Christ, was a major missed opportunity. Talking about “justice” and “righteousness” is fine and all, but there’s nothing distinctly Catholic about Bishop Barron’s prayer. If anything, it reminded me of Matthew 10:33: “He that shall deny me before men, I will also deny him before my Father who is in heaven.”

Barron himself has been a critic of “dumbed down” Catholicism, and an advocate for Catholics to bring their faith into the public square. So it makes his avoidance of the most simple expressions of faith — the sign of the cross, a mention of Christ — all the more baffling.

If he'd listened to his own advice, he might have quoted Pope Pius XI’s encyclical Quas Primas, which states, “It would be a grave error … to say that Christ has no authority whatever in civil affairs, since, by virtue of the absolute empire over all creatures committed to him by the Father, all things are in his power.”

Unfortunately, this is not the first time Bishop Barron has downplayed some of the “hard teachings” of the Catholic faith that princes of the Church are supposed to teach “in season and out of season.”

During an interview with Ben Shapiro last year, Barron was asked about what the Church teaches on who gets into heaven. Instead of reminding Shapiro, a Jew, that Jesus Christ is “the Way, the Truth, and the Life,” Barron said Christ was the “privileged route” to salvation, a claim that incorrectly represented Catholic doctrine.

Fortunately, many Catholic commentators took up their pens to inform Shapiro he’d been given faulty information.

In 2017, Bishop Barron appeared on the aforementioned Dave Rubin’s show, where His Excellency announced he wouldn’t be in favor of rolling back same-sex “marriage” laws because, he alleged, it would probably do more harm than good. Not once did he remind his host, an active “married” homosexual, that the Church believes sodomy is a sin.

Despite the criticism faithful Catholics expressed about Barron’s performance on that particular occurrence, he defended his actions, writing on Facebook, “My aim in the Rubin Report interview was to show its secular viewers that there is a lot more to Christianity than the 'pelvic issues.’”

It’s sometimes difficult to see just how Bishop Barron’s outreach to not only atheists but to the Rubin/Peterson/Rogan crowd is ever going to pay off. Presumably, he’s trying to meet people “where they are” and trying to get them to think about deeper issues. But in doing so, he’s frequently failing to give them the fullness of Catholic doctrine.

Has this strategy ever resulted in the conversion of souls to Christ? It’s possible there are such instances. And maybe even a decent amount. But when does His Excellency plan on bringing up the Catholic faith to these men in public? In other words, when does he think it’s the right time to talk about Jesus, to whom all men are subject?

In my estimation, Barron’s “winsome” approach rarely produces the fruit it promises. Moreover, whenever I read the saints, they seem to take a wholly different approach to teaching the faith. Of all people, Jordan Peterson appears to be more aware of that than Barron is.

During their much-talked about interview earlier this year, Peterson scolded the Church (and perhaps was intending to scold Bishop Barron himself) when he said Catholic clergy aren’t doing enough to make people amend their ways.

“We’re afraid of hurting people’s … feelings in the present and willing to absolutely sacrifice their well-being in the future,” he said. “And that’s the sign of a very immature and unwise culture, because the reverse should be the case.” “If you really love someone, you can’t tolerate when they are less than they could be,” he continued. “When someone comes into the Church, and, it’s all forgiveness, there’s no care there … what the hell are you doing?”

When it comes to Bishop Barron, it’s important, first and foremost, to remind ourselves that he is a bishop of the Catholic Church. He is an alter Christus — a walking, living, earthly representation of the savior of mankind. His primary duty is to preach the Gospel.

While that certainly can be done in a variety of ways, what seems to be happening with Barron’s ministry is that he’s becoming too focused on finding the lowest common denominator and forgetting how simple the Holy Spirit is and how it can stir up in a soul the grace of God when it hears, straightforwardly, the unvarnished truth.

It’s being reported that on Tuesday of last week, Bishop Barron met with a small group of bi-partisan lawmakers on Capitol Hill. Barron apparently told them he would not discuss the “hot button issues” of abortion or marriage and that instead he wanted to make them think about the first time they wanted to get involved in “the vocation” of public service.

Catholic News Agency claims that Barron avoided abortion and marriage because he felt they could distract from “really deep and abiding points of contact between what I call the spiritual condition and political tradition.”

Bishop Barron’s desire to encourage Democrats and Republicans to reflect on why they became politicians is a rather mushy, sentimental, and vastly insufficient message for these diabolical times. My guess is that it has already been forgotten by those who heard it and that it will make no lasting impact on the way they conduct themselves going forward.

What might have actually made these lawmakers reflect seriously on their “vocation” was a message reminding them that they will be judged “more strictly” (James 3:1) than others and that like all persons who have ever lived, they will gain admission to eternal bliss with Almighty God only if they lived in accordance with Christ’s laws and whether they used their state in life to help others do the same. But I guess that sort of approach is too confrontational for Bishop Barron’s style of evangelization. Let’s pray that changes.