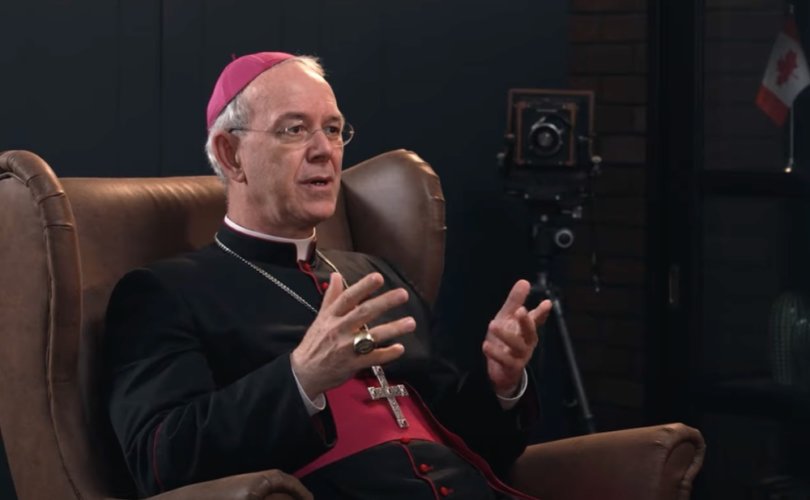 (LifeSiteNews) – Bishop Athanasius Schneider encouraged Catholics to attend Masses celebrated by the Society of St. Pius X, noting that they are “not outside the Church” and are simply doing what the “Church did always” until the Second Vatican Council.

Bishop Schneider, auxiliary bishop of Astana, Kazakhstan, gave his advice in a video clip taken from the monthly video question-and-answer series hosted by the Confraternity of Our Lady of Fatima.

Answering whether it is permitted to attend a chapel run by the traditional Society of St. Pius X (SSPX), he downplayed oft-raised concerns. The society is not in “schism” or is there an  “excommunication” on members of the SSPX, he said, and thus “they are not outside the Church.”

There had been an excommunication on bishops consecrated in the Society – excommunications that were always hotly contested by the bishops themselves – but, as Schneider noted, Pope Benedict XVI revoked this in 2009.

Instead, the auxiliary bishop of Astana noted that “there are irregular canonical situations” regarding the traditionalist Catholic group founded by French Archbishop Marcel Lefebvre, but explained that such a situation should not prevent Catholics from attending the sacraments.

— Article continues below Petition —
PETITION: We won't give any money to liberal bishops who attack the Faith
Show Petition Text
12172 have signed the petition.
Let's get to 12500!
Thank you for signing this petition!
Add your signature:
Show Petition Text

Pope Francis already granted SSPX priests faculties to hear Confessions during the Year of Mercy and continued that permission when the year ended. He then gave local bishops the ability to allow Catholics to be married by SSPX priests, in what was seen at the time as a path toward possible closer links with the Vatican.

READ: This dissertation on Vatican II influenced Rome’s decision to lift the excommunications of the SSPX bishops

“We have to be realistic,” he said.

The situation of the Society of St. Pius X is linked with the extraordinary crisis of the Church. They do nothing but [that] which the Church did always until the Council.

The traditional society of priests performs “no novelties and simply continue what the saints did,” Bishop Schneider said.

The bishop’s analysis of the SSPX is particularly noteworthy, since he was asked by the Vatican to conduct an official visit to SSPX seminaries on behalf of the Holy See. With this prior research in mind, he noted that the Society’s canonical “situation is irregular … due to the great crisis which we are living [in] since the Council. We have to be very honest and see this.”

But he stated that “when there is an emergency of faith, the canonical legal aspect is secondary and the first [priority] is the faith, the truth, and the liturgy and all this which the Church always kept, as it was in the fourth century during the Arian crisis.”

Referring to the excommunication of St. Athanasius for speaking out against the Arian heresies present in the Church, Bishop Schneider recounted the saint’s famous quotation: “They took all the buildings, but we have the faith.”

“We have to look in the global view and pray that there will come a pope who will recognize and give all the faculties to the SSPX and to the other communities who are striving to keep the faith,” the bishop closed.

As a delegate on behalf of the Holy See to the SSPX, he visited two SSPX seminaries in 2015 and shared his observations with the news service Adalente la Fe. He recounted how he could see “no weighty reasons in order to deny the clergy and faithful of the SSPX the official canonical recognition.”

Referencing how the SSPX “believes, worship and conducts a moral life as it was demanded and recognized by the Supreme Magisterium and was observed universally in the Church during a centuries long period,” as well as recognizing the legitimacy of the Pope and local bishops and praying for them, he called for full unity to be granted to them.

“This should suffice for a canonical recognition of the SSPX on behalf of the Holy See,” he said.

Indeed, earlier this year, he repeated that call. He had already “suggested” to the Holy See that the SSPX be given “faculties to celebrate … the Holy Mass” and reiterated it while in conversation with Italian musician and author Aurelio Porfiri.<