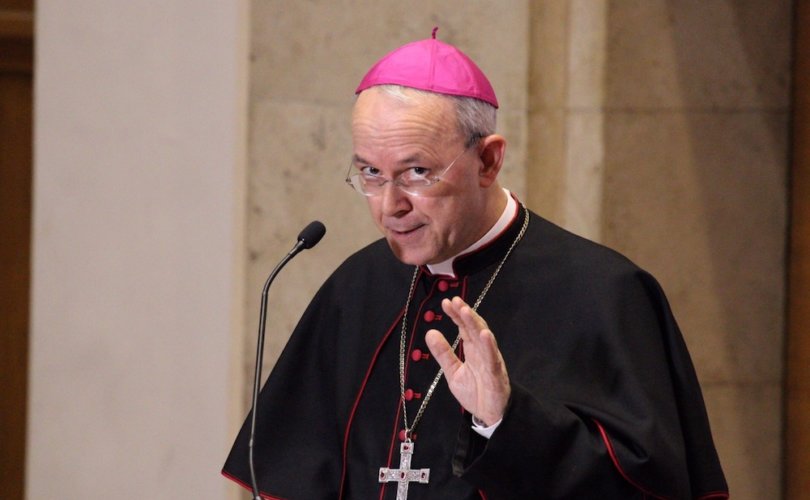 May 8, 2019 (LifeSiteNews) — In a new interview, Bishop Athanasius Schneider makes it clear that the pope’s private correction of his official Abu Dhabi statement — according to which the “diversity of religions” is “willed by God” — that Bishop Schneider himself was able to receive from Pope Francis on March 1 is not sufficient. The Abu Dhabi statement “is still valid,” and thus, says Schneider, “there is being proclaimed a new Gospel, a Gospel that is not the one taught by the Incarnate Word of God, that was loyally preached by the Apostles and passed on to the Church.”

“There can be no doubt,” Schneider explains, “that Saint Paul would say today, concerning this controversial formulation in the Abu Dhabi statement: ‘But though we, or an angel from heaven, preach a gospel to you besides that which we have preached to you, let him be anathema’ (Galatians 1:8–9).”

Pope Francis signed the controversial “Document on Human Fraternity for World Peace and Living Together” with Grand Imam Ahmad el-Tayeb in Abu Dhabi on February 4, 2019.

“Up to now, neither the pope, nor an office of the Holy See speaking in his name, have made a public correction with direct reference to the dubious passage concerning the ‘diversity of religions’” in the Abu Dhabi statement, Bishop Schneider explains in an interview with Gloria.tv. “Therefore,” he concludes, “the formulation concerning the diversity of religions is still valid.”

In the interview, Bishop Schneider goes over in detail the different developments concerning his discussion with Pope Francis about this Abu Dhabi statement.

He insists that the correction given to him by the pope during an audience on March 1 has only a “private character,” and he explains that he gave the pope on the same day a letter asking him to “rescind” the formulation on the “diversity of religions.” Pope Francis, on March 5, answered Bishop Schneider in a letter, saying that in the Abu Dhabi document, the expression “is willed by God”
means the “permissive will of God.”

“I then wrote, on 25 March, yet another personal letter,” explains Schneider. In this letter, he asked the pope if he may repeat “publicly for the whole Church” what the pope had said and written to Schneider in private. Schneider asked him to do so “because of the confusion in the Church that is growing daily concerning the truth that the Faith in Jesus Christ as the only Redeemer of mankind is the only religion directly and positively willed by God.” (One wonders how Grand Imam Ahmad el-Tayeb would respond to such a possible correction of the Abu Dhabi Statement.)

Asked about the fact that Pope Francis, during the general audience on April 3, explicitly spoke about the “permissive will of God”  with regard to the diversity of religions, and whether the pope thereby did not thus “remove the problem,” Bishop Schneider says: “With this formulation, Pope Francis does not make a direct reference to the much-discussed passage of the Abu Dhabi statement.” Additionally, the prelate states, there is no express teaching mentioned that the Faith of Jesus Christ “is the only religion positively willed by God.” Bishop Schneider mentions that Pope Francis did send to him personally a copy of that March 3 statement during the general audience. But he continues, saying that while this March 3 statement may be a “small step forward,” it is still the case that “the statement that is incorrect in itself and as it is to be found in the Abu Dhabi document continues to stand without a clear and authentic correction within the Church” and that “it even is being further spread with its objectively erroneous formulation.”

“Thereby,” Bishop Schneider states, “the truth about the uniqueness of Jesus Christ as Redeemer of Mankind and, subsequently, the Faith in Him as the only religion willed by God is being relativized. This way, the danger grows increasingly that the essence of the whole Gospel and, with it, of the depositum fidei [deposit of the Faith] is being denied.”

In the face of a growing relativization of the  “uniqueness of Our Lord and Redeemer Jesus Christ,” explains the prelate, it is even more important now that the “whole Church and, in the first place, Pope Francis” openly speak about this matter. “The document of Abu Dhabi was, however, not helpful with regard to the main mission of the Church.”

He also points out that the Pontifical Council for Interreligious Dialogue sent a February 21, 2019 letter “to all the Church’s universities” with the explicit request that they help spread, on all levels, the principles contained in the Abu Dhabi document. That letter then also quotes the controversial passage on the diversity of religions. (LifeSiteNews reported on this letter here.)

Speaking about the consequences of the further spreading of the uncorrected Abu Dhabi document, Bishop Schneider points out that it will further “relativize the uniqueness of Our Lord and Redeemer Jesus Christ, and with it also the essence of the Gospel and of Divine Revelation.”

In his last sentences, Bishop Schneider expresses his “burning desire” that daily “more and more voices among bishops, priests, and faithful will come who ask respectfully and lovingly from the pope that he unambiguously correct the statement in the Abu Dhabi document.”