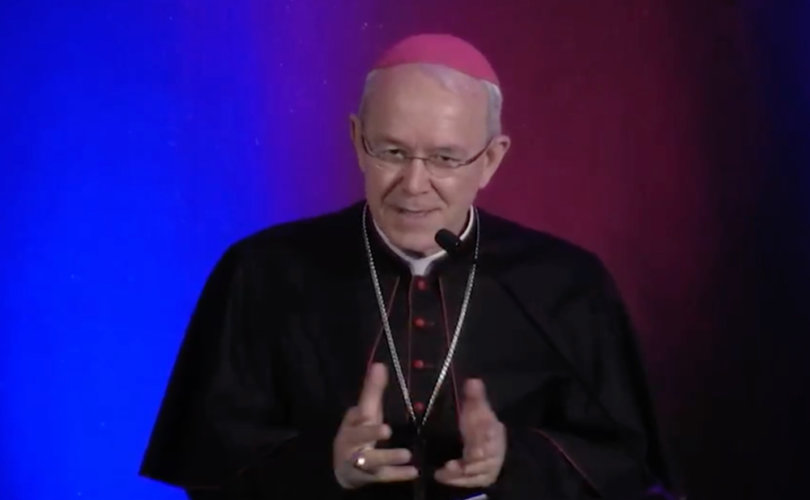 PITTSBURGH (LifeSiteNews) – Bishop Athanasius Schneider has described Pope Francis’ restrictions on the traditional Mass as a “gross abuse of the papal office” which “violate the 2,000 year tradition” of the Catholic Church.

His Excellency made the comments in his prepared address to participants of the Catholic Identity Conference, organized by The Remnant in Pittsburgh over the weekend. The full recording of his talk, along with that of the other speakers, can be found via the conference website.

Focusing on the recent “drastic” restrictions imposed by Pope Francis and Cardinal Arthur Roche on the traditional Mass of the Church, Bishop Schneider stated that “a restriction or prohibition of the traditional form of the liturgy is baseless,” since the “Holy Spirit does not contradict Himself.”

In some of his strongest comments to date on the subject of Pope Francis’ ongoing war on the traditional liturgy, Bishop Schneider warned that the Church was in a “fight” which was being waged “against the time-honored traditional rite of the Holy Mass, which all the saints – for at least a millennium – have loved, and in the case of priests and bishops, celebrated reverently and with great spiritual gain.”

While the last 60 years have seen much liturgical upheaval, the auxiliary bishop of Astana stated that Rome has no authority to “portray as harmful a form of the Roman rite that has remained almost unchanged for a millennium and to order discriminatory measures against its celebration.”

Far from the characterizations of being “rigid,” which the Pope makes of devotees of the traditional liturgy, Bishop Schneider said that attachment to it was an act of “love” for the Church:

Out of fidelity and love for Holy Mother Church and for the honor of the apostolic see, bishops, priests, and the faithful feel obliged in our day, to preserve the traditional form of the Holy Mass and of the sacraments.

“The powers that be hate what is holy, and therefore they persecute the traditional Mass,” he stated. “Yet our answer should not be anger and faint-heartedness but a deep sureness in the truth and inner peace and joy and trust in Divine Providence.”

Just as the Pope cannot abolish the Apostles’ Creed, noted Bishop Schneider, neither can he “prohibit the use of the traditional Mass,” for to do so would be “an abuse of power.” Pope Francis had cited Pope Pius V’s liturgical regulations when promoting Traditionis Custodes, but Schneider explained how this was not comparable.

“Pope Pius V had not declared that the liturgy, according to the Roman Missal he published in 1570, was the only lex orandi of the roman Church and the Roman Rite,” he noted.

Now declaring the reformed of Pope Paul VI as the sole unique expression of the lex orandi of the Roman Rite as Pope Francis is doing, this violates the 2,000-year tradition of all the Roman pontiffs who have never shown such a rigid intolerance.

“It is a rigidity,” continued the bishop, employing one of Francis’ words oft-used in his campaign against the ancient liturgy.

Indeed, Bishop Schneider rejected Francis’ claims in Traditionis Custodes, saying that “one cannot suddenly create a new rite as Paul VI has done and declaring it is the exclusive voice of the Holy Spirit in our time, and in the same time portraying the previous rite – which was almost unchanged in the span of at least 1,000 years – as deficient and harmful to the spiritual life of the faithful.”

Such argumentation “inevitably leads to the conclusion that the Holy Spirit in contradicting himself” – which would be impossible, Schneider noted.

Bishop Schneider, one of the most prominently known bishops to publicly celebrate the ancient liturgy, explained to the conference that it contained and radiated “eminent doctrinal integrity and ritual sublimity.”

READ: Pope Francis is strengthening his grip over the Church’s bishops, ensuring loyalty to his ideas

Furthermore, he suggested that opponents of the Mass were concerned about such aspects:

The splendour of truth, sacredness and supernaturality of the traditional rite of Mass worries those clerics in high Church positions in the Vatican and others who have embraced a new revolutionary, theological stance, which is closer to the Protestant view of the Eucharist and of worship, and which is characterised by anthropocentrism and naturalism.

“The Novus Ordo of Paul VI without doubt,” he stated, “weakens the doctrinal clarity about the sacrificial character of the Mass and weakens considerably the character of sacredness and of the mystery of the worship itself.”

Paul VI’s new Mass was an act of “true revolution,” said Schneider, noting that he was “the first pope in 2,000 years who dared to make a revolution of the order of Mass, a true revolution.”

— Article continues below Petition —
Join Bishops in calling out Pope Francis' statement for contradicting the faith
Show Petition Text
5738 have signed the petition.
Let's get to 6000!
Thank you for signing this petition!
Add your signature:
Show Petition Text

Move to the catacombs

“The current persecution against a rite, which the Roman Church jealously and unchangingly guarded during at least one millennium – therefore long before the Council of Trent – resembles now an analogue situation of the persecution of the integrity of the Catholic faith during the Arian Crisis in the 4th century,” he added. “Those who at that time kept unchangingly the Catholic Fatih were banned by the vast majority of the bishops from the churches, and they were first to celebrate a kind of clandestine Masses.”

Bishop Schneider also quoted extensively from the letters of St. Basil the Great, drawing a comparison between the the hierarchy of the saint’s time and the current era, noting first that “today clerics and bishops who promote impiety are promoted.” Quoting directly from St. Basil’s description about church of his time, Schneider stated:

The doctrines of true religion are overthrown. The laws of the Church are in confusion. The ambition of men, who have no fear of God, rushes into high posts, and exalted office is now publicly known as the prize of impiety.

Yet despite such a warning about the catacombs, Schneider did not promote fear but rather hope for the future of the Church. “The Church is always, and even in the pontificate of Pope Francis, in the almighty hands of Christ. Not in our hands,” he said.

He described the current crisis of the Church as “the Golgotha hours,” which She suffered “with Christ, the head of His mystical body.”

In the face of this “persecution,” the auxiliary of Astana urged Catholics to “keep our great sobriety, common sense and supernatural vision. We should not yield to the temptation and assume an attitude of resolving with human means the immense crisis of the Church.”

Instead, he called on Catholics to welcome the “liturgical exile” as a persecution suffered for God.

“The Catholic Church, with its visible head the Roman Pontiff, will again be the pillar of the beauty and sacredness of the rite of the Holy Mass since the Holy Spirit does not contradict Himself,” he said.