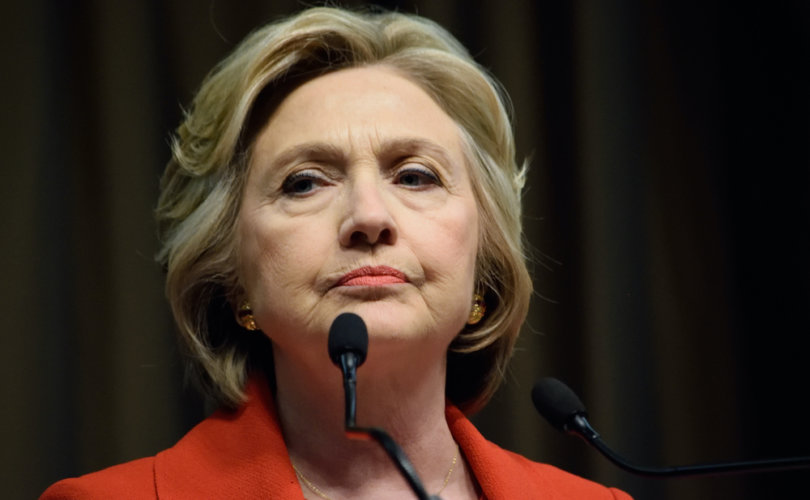 “Please, please don’t listen to this evil woman. Her lies and immorality need to be silenced for the good of humanity,” Strickland wrote in a Tweet.

Please, please don’t listen to this evil woman. Her lies and immorality need to be silenced for the good of humanity. https://t.co/fZhp6bljnK

The Bishop of Tyler, Texas reacted to Clinton’s recent statement at the “women’s rights summit,” where she linked the pro-life movement in America to the Ayatollah regime in Iran, the Taliban, and Russian soldiers who rape women in Ukraine.

Clinton said the following in an interview with PBS journalist Christine Amanpour:

We have come a long way on so many fronts, but we are also in a period of time where there is a lot of pushback and much of the progress that has been taken for granted by too many people is under attack: literally under attack in places like Iran or Afghanistan or Ukraine — where rape is a tactic of war — or under attack by political and cultural forces in a country like our own when it comes to women’s healthcare and bodily autonomy.”

“But we have work to do to try to defend our rights, to stand up for them,” Clinton continued. “And what we’ve seen particularly since the Dobbs decision across our country is that when voters, both men and women, but led by women, have a chance to vote on these draconian abortion restrictions, they do not accept them.”

Hillary Clinton goes on PBS and compares pro-lifers to the Iranian regime, the Taliban, and Russian soldiers raping Ukrainian women. Of course, Christiane Amanpour agrees, “This pushback on American women’s rights at the same time as you’re trying to figure a way forward.” pic.twitter.com/5GznH9uK01

In the Dobbs v. Jackson Women’s Health Organization in June 2022, the Supreme Court ruled that the U.S. Constitution does not confer a “right to abortion,” allowing U.S. states themselves to legislate abortion and introduce restrictive abortion laws.

— Article continues below Petition —
URGENT: Say No to the UK introducing a “right” to abortion
Show Petition Text
10646 have signed the petition.
Let's get to 12500!
Thank you for signing this petition!
Add your signature:
Show Petition Text

The former presidential candidate wrongly claimed that women requesting medical care after miscarriages or when their life is in danger during pregnancy would be turned away, insinuating that pro-life laws would lead to women’s deaths.

“So, we’ll see what happens in states like Arkansas and so many others when we face real world problems,” she said. “As we have seen already where women with miscarriages go in for medical care and are turned away. When maybe, God forbid, a woman dies because that health care is denied her.”

Strickland has become well-known for publicly calling out evil actions and also correcting his fellow Catholic prelates when necessary. He said in October that Catholics should correct bishops whose teachings don’t conform to the apostolic faith.

When German bishop Franz-Josef Bode, vice president of the German bishops’ conference, claimed in 2020 that “[f]or us, Christ became a human being, not a man,” Strickland publicly corrected Bode and called his statement “ridiculous & heretical.”