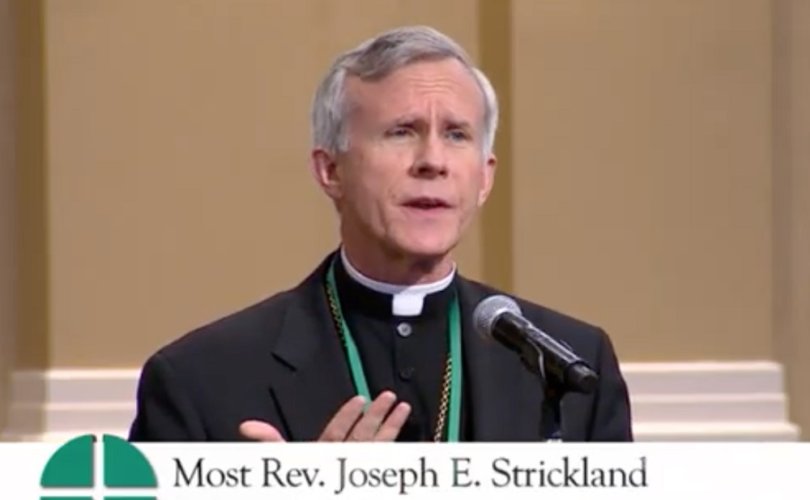 Speaking from the floor of the spring General Assembly last Thursday, Strickland expressed support for what Jefferson City, Mo., bishop Shawn McKnight had said earlier: that lay involvement is mandatory in dealing with holding bishops for either sex abuse or its cover-up.

The bishops considered and approved three documents related to reporting and investigating claims of abuse or the intentional mishandling of these cases by bishops at their spring meeting in Baltimore.

One document covers bishops removed from office or who resigned due to sexual abuse or intentional mishandling of cases. Another “reaffirms the commitments bishops make to live according to the Gospel and to place themselves under the same high standards applied to their priests, deacons, and lay personnel.” The third pertains specifically to the reporting and investigation of complaints against bishops.

The bishops also approved the establishment of a national third-party reporting system to streamline the reporting of certain complaints against bishops.

They did not, however, mandate lay involvement in investigating bishops.

In the Q&A session for one of the documents, Affirming Our Episcopal Commitments, Strickland reminded the bishops of “the blessing” (39:10 at video below) of two lay advisory bodies available to them: the National Advisory Council and the National Review Board.

“They’ve both spoken to us powerfully this week and reiterated once again a desire that a full reckoning of the McCarrick scandal be offered,” Strickland said. “I’ve been assured that the Holy See is working on that.”

“I would just encourage the Executive Committee of the USCCB, and anyone else who has information, to work with those two lay bodies, those two lay advisory groups that are already there, excellent people,” he said. “They’ve already proven a deep commitment to the Church and excellent advice they’ve given.”

“I would encourage that we pursue their strong recommendations and support efforts to bring to light the McCarrick scandal issues as fully as possible,” stated Strickland. “And as Bishop McKnight said, we need that mandatory aspect of the laity involved as much as possible.”

McKnight had said, “I believe it should be mandatory that we involve laity in the investigation of any case of sexual abuse by a bishop or corruption, cover-up.”

“Lay involvement should be mandatory to make darn sure that we bishops do not harm the Church in the way bishops have harmed the Church, especially what we have become aware of this past year,” he said, running down a list detailing why.

McKnight then concluded, “And now that we have experienced this horrible year of bad bishops, the laity too are rightly demanding: ‘something must change.’”

Lay involvement already occurs and is encouraged in assisting the bishops in addressing sex abuse, but the fact that it is not mandated has many saying the bishops still haven’t acted to make themselves accountable for clergy sex abuse.

Francesco Cesareo, lay chairman of the National Review Board, addressed the bishops at their meeting earlier in the week, cautioning that the systems now being set in place by the Vatican and the United States Conference of Catholic Bishops (USCCB) to handle episcopal sexual misconduct still leave “bishops policing bishops.”

Vos Estis Lux Mundi, the pope’s document produced after the sex abuse summit called by the pontiff last February, was taken into account with the U.S. bishops’ action items last week, but the moto proprio only allows for lay involvement in investigating bishops; it does not require it.

The Vatican had put the brakes on the U.S. bishops acting on accountability at their meeting last November in lieu of the pope’s February meeting with the presidents of the bishops’ conferences worldwide.

At that same meeting, the bishops voted against asking the Vatican to release documents related to the McCarrick scandal.

Following the bishops’ fall General Assembly, McKnight had called for lay involvement in a column as well, urging bishops who knew about McCarrick to be honest about the cover-up.

Strickland was among the first to call for investigating claims made by former apostolic nuncio to the U.S. Archbishop Carlo Maria Viganò and the only bishop among the hundreds in the U.S. conference to join the laity and pray with them as they rallied outside the bishops’ meeting in Baltimore in November.

Both bishops were lauded among a total of five at the November meeting for being shepherds to their people, fraternal correction among bishops, involving laity in addressing the abuse, and having appropriate regard for the Church’s moral teaching on sexuality.

Pope Francis ordered a study of all Vatican documents related to McCarrick last October. Results of that remain to be seen, as anger among the laity remains high over the handling by Church leaders of the clergy sex abuse crisis.