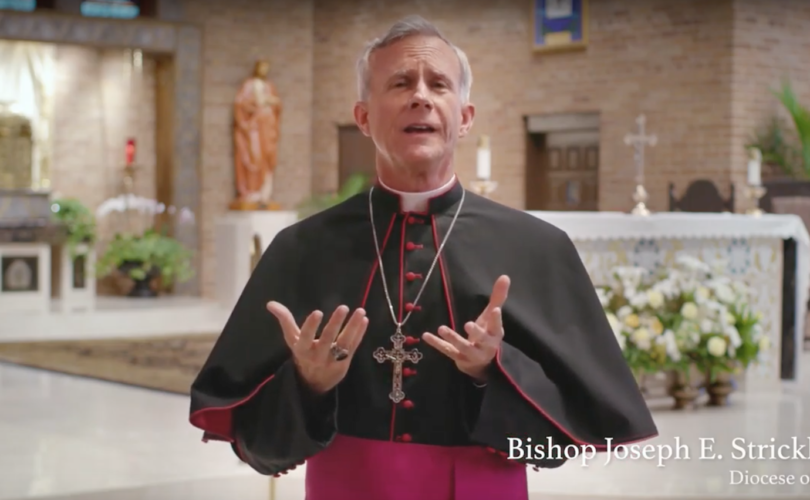 (LifeSiteNews) – Bishop Joseph Strickland of Tyler, Texas avowed that he would rather die than attempt to benefit from a “vaccine” produced using an aborted child.

Strickland shared his strongest repudiation yet of abortion-tainted vaccines in a Dec. 30 tweet supporting similar sentiments by Father Mark Goring:

I’m with Fr Mark Goring, I’d rather die than benefit from anything produced by using an aborted child……Join the Cause – Fr. Mark Goring, CC https://t.co/oyErrf3KVs via @YouTube

Both Strickland and Goring have been vocal opponents of the use of fetal cell lines in the development of “vaccines” or any other products since at least soon after the COVID-19 outbreak. In December 2020, they discussed with each other the moral problems with the COVID vaccines developed using cell lines of aborted children.

Strickland said of the vaccines at the time, “The bottom line is, if it used unborn children that were aborted, intentionally killed, and we’re using their bodies to build something that helps our bodies, I say no, and I encourage others to say no.”

When Goring brought up the interior conflict of someone who wants to protect an elderly, vulnerable family member from COVID-19 and its potentially deadly consequences, Strickland pointed out that the Code of Canon Law expressly states that it is “based on the salvation of souls,” and therefore all of our decisions should prioritize that end.

Strickland cautioned people “to not compromise that call to everlasting life to hang on to a few more years here.”

While the video from Goring that Strickland shared in his Dec. 30 tweet has since been made private, Goring has two public recent videos expressing his firm rejection of abortion-tainted pharmaceutical products, including “vaccines,” that is, those developed using cells derived from aborted children.

In his “Tainted Pharmaceuticals” video posted Dec. 29 of a homily he gave during Mass, Goring decried the use of products developed using cells of aborted children as a kind of complicity with the killing of children.

Goring recalled how King Herod, in fear of the rise of the King of the Jews the Magi, came to adore, ordered the killing of children “from a distance”: “He’s not going to hear the cries, he’s not going to see the blood. … And so, too, this industry, this approach that we’re told is expanding — we don’t see it, we don’t hear it, we don’t hear the cries, but we’re kind of complicit with it.”

Goring noted that the original mainstream “narrative” “was that it was just maybe one or two abortions from the 60s or 70s” used in pharmaceutical products. “But more recently, it’s been acknowledged,” Goring said, that “hundreds” of aborted children have been used to help produce currently used pharmaceuticals.

“I was talking to a doctor who’s very well aware of this reality of using unborn children to make these products. It’s worse than you imagine,” Goring continued. “I’ll spare you the details, but this is gruesome. It’s horrific. It’s an abomination. It should be outlawed.”

Goring suggested that Christians put pressure on pharmaceutical companies by refusing to use any product that is “abortion-tainted.”

“Money talks,” Goring said. “If you can’t figure out how to make something not abortion tainted, too bad, figure it out. We’re good at figuring things out if we have to.

Goring pointed out in another talk that “many pharmaceutical companies are very happy to highlight that there was no animal testing involved in the production of their products.”

“We should have the same respect for the life of unborn children. If consumers demand to know whether or not a product is abortion tainted, we shouldn’t be laughed out of the pharmacy. This is a perfectly legitimate thing to be concerned about.”

“I want to see a little symbol one day that indicates [that] this medication I’m taking, or the product I’m taking is not abortion tainted. Because I don’t want to have anything to do with the taking of the innocent life of a child,” Goring said.

Strickland, who has frequently decried the abortion-tainted COVID “vaccines,” most recently highlighted the failure of bishops in their duty to oppose totalitarian COVID mandates, in an episode of The Bishop Strickland Show.