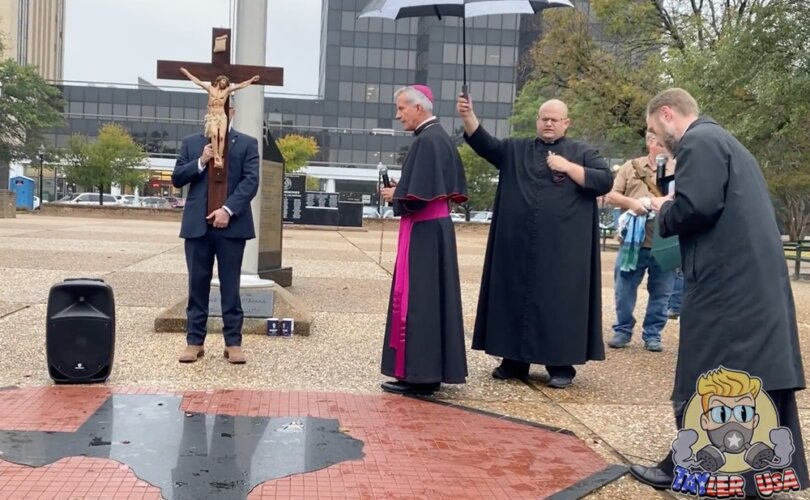 Bishop Joseph Strickland of Tyler, Texas, leads faithful Catholics in prayer ahead of the planned pagan festival in the downtown square.Tayler Hansen/Twitter/Screenshot

TYLER, Texas (LifeSiteNews) — Local Catholics led by Bishop Joseph Strickland were among other Christians who came out to protest and pray in opposition to a Texas Pagan Pride Festival last weekend during which self-professed Satanists performed “unbaptism” ceremonies.

The Satanic Temple (TST) of Dallas-Fort Worth performed the “unbaptism” ceremonies on Saturday at the Pagan Pride Fest in the downtown square of Tyler, Texas, according to independent reporter Tayler Hansen.

Hansen posted a series of video clips to Twitter from his on-the-ground reporting at the event, including footage of the “ceremonies” taking place. In one of the videos, mask-clad self-professed satanists drew upside down crosses on the foreheads of participants and chanted “Hail Satan.”

People who participated in the event were reportedly given the opportunity to take home a certificate memorializing the ceremony for a $10 price tag.

The Satanic Temple is performing “unbaptisims”.

After an upside down cross is drawn on their forehead they chant “Hail Satan”. pic.twitter.com/22ejzesxLb

TST is a pseudo-religious organization that claims abortion as a satanic ritual and seeks to undercut Christianity in the public square. The group claims not to “believe in God or Satan,” and calls its “unbaptism” ceremony a “cleansing ritual” and a “ritualistic cathartic release and unbinding of ties to previous religious dogma.”

According to the Catholic Church, Baptism is a sacrament that “seals the Christian with the indelible spiritual mark… of his belonging to Christ.” The Catechism of the Catholic Church teaches that “No sin can erase this mark, even if sin prevents Baptism from bearing the fruits of salvation.”

The Pagan Pride Fest and its Satanic participants didn’t conduct their ceremonies without pushback from Texas Christians.

According to the Tyler Morning Telegraph, the publicized “[p]lans for the ceremony prompted church meetings, virtual citywide prayers and a few groups of Christians taking to the square to pray for attendees and ‘show love.’”

Bishop Joseph Strickland of Tyler led a group of faithful Catholics in prayer and blessed the grounds in advance of the event, according to a video posted by Hansen.

A local Catholic group blessed the grounds prior to the Satanic Temple event that was hosted in Tyler, TX today. pic.twitter.com/MSJVm27cka

Several Protestant Christians also attended the event, and told the Tyler Morning Telegraph they did so to try to help participants come to know Christ.

“If you let the devil sit in the door, before you know it, he’ll take hold,” Brandon Chrisman told the paper. “We’re just showing love and trying to bring light to the darkness as much as we can. We’re not here to judge — just love.”

“We come in love, and we just want to represent Christ,” Kelsey Chrisman contributed.

Another local Christian, Rob Coulter, told the outlet “if you share Jesus, even in this dark situation, somebody’s gonna see that light and go toward Him.”

Anticipating Christian pushback, the Dallas-Fort Worth Satanic Temple had urged supporters on its Facebook page not to “engage” or “argue” with protesters, who they said “are not there to listen; they are there to try to ‘save you.’”

The Dallas TST chapter added it will not “come bail you out of jail” for engaging in a confrontation with a protester.

Pagan Pride Fest organizer Raynie Castañeda sought to wave away concerns about the satanic rituals taking place at the event, telling the Tyler Morning Telegraph participants were “just hanging out,” and noting that “[t]here’s kids trick-or-treating, people getting their faces painted.”

Castañeda claimed some Christians screamed at festival participants, who he said were “just existing” and weren’t “doing anything satanic or any crazy rituals,” despite the fact that The Satanic Temple hosted a booth and performed rituals which purport to reverse Christian baptism.

Though the satanic group from the Dallas-Fort Worth area weathered pushback from Christians, earlier this year an Idaho chapter pulled out of its planned activities after facing backlash online.

In June, a group of self-professed satanists affiliated with TST withdrew from a so-called “family-friendly” LGBT pride event in Idaho after its involvement drew outrage on social media, LifeSiteNews previously reported.

Rowan Astra, the Congregation Head Elect for Idaho’s TST chapter, reportedly said in a tweet the group would be “performing unbaptisms for those interested” during the event.