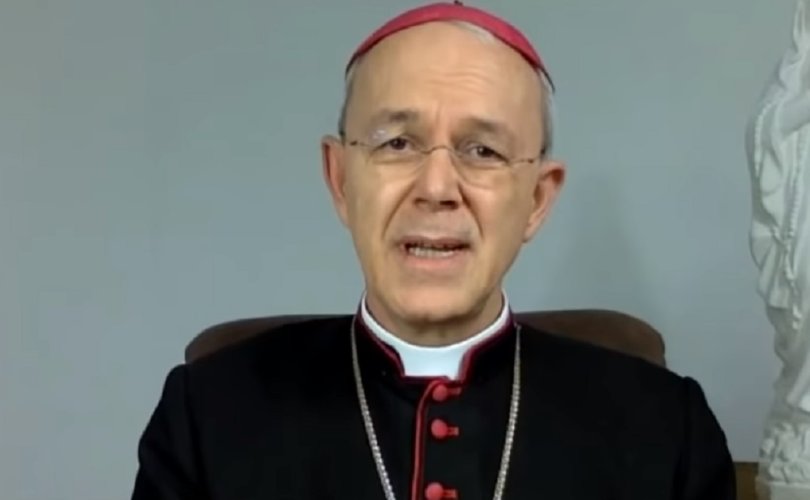 May 17, 2019 (LifeSiteNews) — The signers of the recent open letter accusing Pope Francis of heresy “went too far,” Bishop Athanasius Schneider said, and the examples given for the charge do not constitute “formal” heresy.

While the pope in practice has at times denied the truth, he said, the distinction between formal and material heresy must be made. Formal heresy, he said, would happen if the pope were to “publicly and explicitly” in a “formal statement” deny a “revealed truth.”

“There were a lot of ambiguities, I would say more ambiguities,” said Schneider, “and practical collaboration in the spreading of wrong teaching in the Church.”

But, Schneider insisted, “they have to be very careful in accusing the pope of formal heresy.”

On the May 16 episode of The World Over with Raymond Arroyo, Schneider, the auxiliary bishop of Astana, Kazakhstan, shared his reaction to the open letter, along with the pope’s efforts to quash the death penalty, the controversial February Abu Dhabi statement on religious diversity signed by the pope, the subject of female deacons, and the possibility of married priests in the Amazon.

Schneider said regarding the death penalty that the pope was contradicting 2,000 years of Church teaching.

On the Abu Dhabi statement, he said a public correction from the pope is needed. He contended that addressing the Amazonian priest shortage by ordaining married men is a worldly response and a “deceit.”

As of May 14, some 87 noted clergy and scholars had signed the open letter charging heresy based on Francis’s many and varied embraces of stances contrary to the Catholic Faith and his support of prelates who have exhibited clear disregard for the Church’s faith and morals.

There has been much discussion since the letter’s release about what amounts to heresy and whether the its signatories are qualified to deem such, along with criticism of the signers’ credentials from defenders of Pope Francis.

“He in practice is denying the truth”

When asking whether Schneider felt that what the letter alleges rises to the level of heresy, Arroyo cited the examples of the Abu Dhabi statement on religious diversity and the teaching in Francis’s controversial exhortation Amoris Laetitia (A.L.) allowing Communion for Catholics separated from their spouses and living with someone else in a civil “marriage.”

Schneider was clear in saying formal heresy had not occurred based upon how the situations were carried out.

“No, because a heresy is a formal statement which denies in formal speech the real truth,” he said.

The pope did not deny publicly and explicitly the indissolubility of marriage, he said, therefore he cannot be accused of heresy.

Francis did give permission to the Argentine bishops to distribute Communion to Catholics living in adultery when in 2016 he affirmed in a private letter their guidelines for interpreting A.L.

The guidelines contradict Familiaris Consortio by permitting adulterous couples with “complex circumstances” to “access the sacraments of Reconciliation and the Eucharist” after taking a “journey of discernment.”

“But with his permission,” said Schneider, “which is his approval of the norms of the Argentine bishops — which in some cases allow the access of people living in adultery to Holy Communion — with this approval of the pope, he in practice is denying the truth.”

The bishop clarified that Francis was doing so “not by words,” and “also only specifically for a region.”

“He did not approve a general norm for the entire Church,” Schneider said. “So we have to distinguish these levels.”

To state that the death penalty is in itself immoral contradicts the entire 2,000 years of Church teaching

Arroyo asked Schneider whether the pope’s most recent comments on the death penalty, where Francis had said, “There has been a development of moral consciousness,” could be applied to other teachings in the Catholic catechism.

It’s important first to be clear about what true development of doctrine means, the bishop replied, and it does not mean the changing of doctrine.

“The Church always taught that there can be development only under the condition that it remains the same meaning, the same sense as before,” said Schneider. “So it could not be evident, obvious contradiction. This will not be a true development of Church doctrine.”

“To state now that the death penalty is in itself immoral, it contradicts, obviously, the entire 2,000 (years of) teaching of the Church,” he said, “and this is not development, but contradiction — evident contradiction.”

“There can be development in applying some truth concretely,” Schneider explained. “For example, to apply the death penalty, there can differ how we do concrete and practical apply(ing of) the death penalty. But there cannot be difference on the principle itself.”

“It is theologically, dogmatically impossible to confer to women the diaconate”

Asked by Arroyo about the pope having apparently shut down further consideration of a female diaconate based on statements Francis made May 10 at the Assembly of the International Union of Superiors General, Schneider said he was “very happy of these words of Pope Francis.”

“They are quite clear that there is no possibility of sacramental ordination of women,” he said.

“It is theologically, dogmatically impossible to confer to women the diaconate,” said Schneider. This is because Holy Orders is one sacrament in three parts — the diaconate, priestly ordination, and episcopal (bishop) ordination — and the Church teaches that only men are admitted to the priesthood.

Arroyo asked what Schneider found troublesome about the passage in the Abu Dhabi statement signed by Francis that says God wills a diversity of religions.

The particular text states, “The pluralism and the diversity of religions, color, sex, race and language are willed by God in his wisdom, through which He created human beings.”

Schneider responded, “The phrase itself as it reads, it’s logically and theologically wrong.”

“A public correction is very much needed”

Schneider had brought his concerns on the document to Francis in a private meeting in March. The pope said he could publicly clarify the difference between the will of God and the permissive will of God, and this would clear things up.

However, since then, Arroyo pointed out, the Pontifical Council for Interreligious Dialogue has asked Catholic university professors to distribute the Abu Dhabi statement, with the phrase remaining uncorrected. He asked Schneider if a public correction must be made.

“A public correction is very much needed,” Schneider responded, “because as the phrase reads in itself it is ambiguous — not only ambiguous; it is wrong.”

“We lived our Catholic faith in the domestic Church”

Arroyo queried Bishop Schneider as to whether allowing married men into the priesthood is a legitimate solution for the priest shortage in the Amazon region — an argument circulating around the upcoming conference focusing on that region in October.

“No, it is a deceit,” Schneider stated pointedly. “It is a pure human solution, a practical, human, I would even say worldly solution.”

He recounted how he himself lived in the time when, due to Soviet control, there was a shortage of priests for decades.

“But we lived our Catholic faith in the domestic Church,” Schneider said.

Sometimes it was only once a year when a priest could come and give the sacraments, he added, and with the underground Church in the Soviet time, as well as other times in Church history, Catholics kept and transmitted the faith in strong fashion.

“We have already a clear proof a demonstration from the history of the Church that God provides with His graces even people who are longing for a priest,” Schneider said. “And therefore the solution is to strengthen the families, the domestic Church and then to pray for holy priestly vocations.”