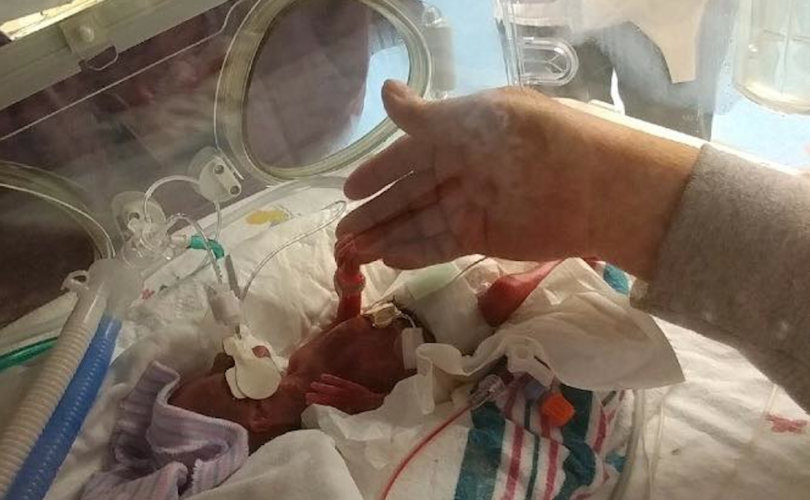 Malinda Figueroa gave birth to Christopher Ruben Figueroa on February 4 at 23 weeks. The baby, who remains in the NICU, weighed 1 lb., 1 oz. and arrived shortly after the local community gathered outside the hospital to pray for the baby and his mother.

Figueroa was put on life support after suffering a massive stroke on January 24. Doctors gave her no hope of recovery. Her family requested that Saint Alphonsus Regional Medical Center keep her on life support until the baby could be safely delivered.

Malinda’s high-risk situation was turned down by a number of other hospitals, said Jason Herring, director of ministry outreach for Stanton Healthcare and spokesperson for the family.

Because there was no precedent, the hospital initially sought a transfer to another medical center that might have been more suited to Malinda’s case. Declined by four other hospitals, the team at Saint Alphonsus honored the request of the family and pledged to work to save baby Christopher.

“It was a once-in-our-state-history case that a brave team of doctors has embraced,” Herring told LifeSiteNews.

A Saint Alphonsus spokesman told the local ABC affiliate the hospital could not comment on specific patients. The representative did say Saint Alphonsus’ mission as a Catholic healthcare provider includes a responsibility to human dignity that inspires an enduring concern for the sanctity of human life. This responsibility guides providers and staff to work closely with patients and families in providing quality, compassionate and ethically aligned care.

“It was a very brave decision considering that this had never been done before,” he added. “We applaud their courage.”

Stanton, a pro-life medical clinic and outreach, joined with the family to offer support after word of Malinda’s plight spread through a local prayer chain and family members reached out to them.

Figueroa, 38, had learned she was expecting after being told that she could never conceive and bear a child due to health challenges.

It was also because of those health challenges that she was advised to have an abortion. She refused.

“She was determined to bring her child to life,” Herring said.

Herring said Figueroa had a premonition that she was not going to make it, and she had told the baby’s father, Chris Chavez, “You’re going to have to fight for our child.”

When Malinda and Chris discovered that they were having a boy, they named their son “Christopher Ruben,” Christopher after Chris, and the baby’s middle name, Ruben, for Malinda's father.

As the details were first being worked out for keeping Malinda on life support so baby Christopher could be delivered, Saint Alphonsus also agreed to allow a prayer service organized with Stanton’s help to be conducted in front of the hospital.

More than 100 people gathered to pray that Sunday, including civic and faith leaders, friends and family, with about half the crowd composed of strangers who learned about the family’s story.

“They are wonderful people,” said Malinda's aunt, Julia Chavez-Reynoso, in a report from KIVI-TV. “I don't know a lot of these people, but they all came together for little Christopher and my sister, and we are so thankful for that.”

With Malinda experiencing declining oxygen levels later in the early evening that also affected Christopher, doctors decided it was time to deliver the child.

When he was born, Christopher let out a cry that could be heard in the hallway – a good sign for a premature baby.

A report from Stanton last week said the baby had a good grip — squeezing his grandmother's finger — and he was drinking milk and even wetting on nurses a few times.

Christopher's grandfather, Ruben, remarked after his grandson was born on Super Bowl Sunday that Christopher was a “Super Bowl baby,” the Stanton report said. “And Malinda is a superhero mom — a mother who bravely sacrificed herself for her child — who in death, incubated her son to life.”

The hospital removed Malinda from life support the following night. Her funeral was held Monday of this week.

“They welcomed one life into their family and said goodbye to another,” Stanton Healthcare’s statement said. “We continue to pray for strength and health for baby Christopher, and we pray for comfort and grace for his family.”

Baby Christopher is doing well and everything is normal for a baby his size, Herring told LifeSiteNews.

The valve in Christopher’s heart that would have closed at birth is open, which is typical for a premature baby, Herring reported. The doctors are awaiting results of a cardiac ultrasound to determine if the valve is closing on its own. If the valve is not closing, they will give him medication that only needs to close it slightly to be effective. If that fails, they will have to do a procedure to close the valve.

The doctors report that Christopher is “critical but stable.” He is critical because of his size and stable because everything is normal.

Stanton continued to call for prayers for the family as Christopher makes his way in the world as a preemie. He posted on Facebook Tuesday night, “Baby Christopher Ruben is doing great! When grandma Rita sings to him in the NICU he moves his arms!”

“Malinda's brave commitment to her preborn son, Christopher, is one of the most heroic things I have ever seen,” Brandi Swindell, founder and CEO of Stanton Healthcare, said. “She sacrificed her own life for her son. This is the ultimate example of what it means to be a woman and a mother.”

Donations to the family came be made at their GoFundMe page.