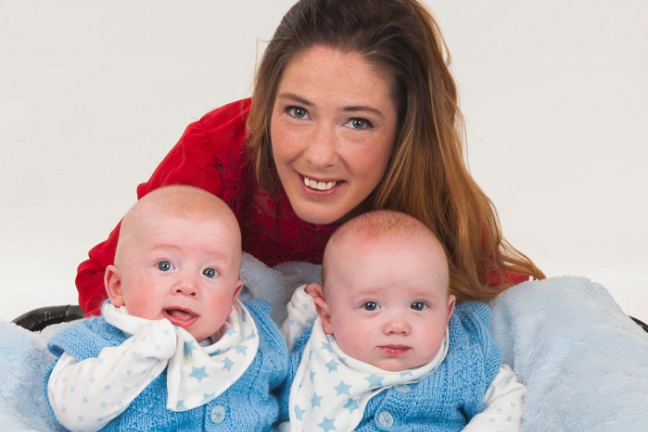 May 26, 2017 (SPUC) — Becky Anderson refused doctors' advice and saved her unborn twins, despite being told her cervical cancer could kill her.

Becky, from Portsmouth, who was already mom to Morgan, 18, and Phinley, nine, discovered she was pregnant in May 2016. But just two months later, a smear test came back as abnormal, and she was told she had cervical cancer.

More tests, when Becky was 15 weeks pregnant, showed the cancer was contained in her cervix and she would not need chemotherapy.

She told the Sun: “It was such a relief to hear it hadn’t spread. But as soon as the news sunk, my first concern was for my unborn twins. I asked doctors if they would be OK.”

The doctors gave Becky a terrifying ultimatum — end the pregnancy and start treatment straight away, or risk the cancer spreading.

Becky said: “They wanted to give me a hysterectomy the following week but I was adamant I would not have an abortion.”

It is not clear from the story whether “abortion”means here a hysterectomy for cancer treatment with the unintended side-effect that the twins would die, or whether a genuinely abortive procedure with the aim of lethally attacking the twins was proposed.

Becky said: “I'd gone from being on top of the world to being in the depths of despair, worrying whether I was going to actually survive…I knew I needed to survive for the sake of my children. There was no way I was leaving them.”

A risk I was willing to take for my precious babies

The brave mom wouldn't even consider having her womb removed – which would have meant removing her twin boys with it: “I never gave my decision a moment's thought — there was no way I was getting rid of my precious babies.

“I kept thinking that their lives were just starting while mine could be ending, but it was a risk I was willing to take.”

Instead, doctors waited until Becky was 30 weeks pregnant before delivering the babies by cesarean section. Preslee and Buddy were born weighing 3lb 7oz and 3lb 6oz respectively at Queen Alexandra Hospital, Portsmouth, in October. Their mother was then rushed straight into surgery, where she had her womb and cervix removed to treat the cancer.

It was four days before Becky had the strength to see her boys and they were wheeled to her hospital bed in their incubators.

She said: “I was exhausted and in agony but when they were placed on my chest, I breathed in their scent and just couldn’t believe they were here.”

“I was crying through a mixture of pain, love and disbelief that I was finally getting to hold them.”

The boys are now six months old, and while Becky hasn't quite got the all clear yet, she's hopeful she doesn't need any further treatment. She doesn't regret her decision at all: “I wouldn’t change it for the world. They are an absolute joy and I love them very much.”

For more information on cancer in pregnancy see https://cancerinpregnancy.org/