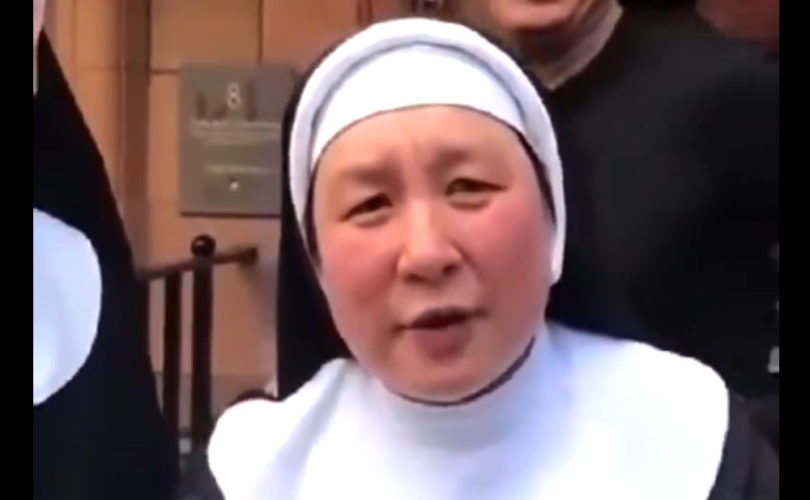 LONDON, June 2, 2021 (LifeSiteNews) — Last weekend, anti-lockdown protestors in London, U.K., were welcomed by Catholic nuns from the historic Tyburn convent, one of whom revealed that she had been asked to pray for “50 people who have died” following the reception of COVID-19 experimental vaccines. The brave nun later gave a powerful email interview to LifeSiteNews, providing shocking details of the incidents which had been entrusted to the convent’s prayers, urging people to have hope, and to strengthen their prayer life in the face of a what is ultimately a “battle between good and evil.”

In London, Unite for Freedom marchers protesting coronavirus restrictions and vaccine passports were greeted by a group of cheering nuns as they made their way past Marble Arch.

One of the sisters, Mother Marilla, the Mother General, addressed the protestors, encouraging them as they marched through the streets of the capital.

“You were made in the image and likeness of God. You were born free,” she said. “Don’t let them take your freedoms away from you.”

She also warned against the much-hyped experimental coronavirus injections. “Protect the children, and under no conditions let them have that vaccine, it kills people,” she stated.

There were also “527 reports of miscarriage or premature birth,” out of the 1,641 pregnant mothers who voluntarily reported adverse reactions to the injection to VAERS.

Meanwhile, weekly data released by the government in the U.K. records over 851,000 adverse reactions following the coronavirus injections, including 1,213 deaths.

147 mothers have reported miscarriages or stillbirths following the injection, and despite this, the U.K.’s Joint Committee on Vaccination and Immunisation (JVCI) advised that pregnant mothers can take the COVID injections. Both the U.K. and the U.S. data is collated based on voluntary reports, and is estimated by the official bodies themselves, to account for between 1% to 10% of the actual adverse effects.

Mother Marilla revealed in the video that people had contacted the convent asking for prayers for those who had died, not only in London and England, but in Ireland, and further overseas also.

The marchers, who numbered in the hundreds of thousands, up to a million, greeted the nuns warmly, with many hugging and thanking the religious sisters for their encouragement and prayers.

The nuns are from London’s Tyburn convent, and are part of the Benedictine Adorers of the Sacred Heart of Jesus of Montmartre, an order which has been based in Tyburn since 1901. Their life is centered around Eucharistic adoration, and as such, there is always at least one nun praying in the chapel before the exposed Blessed Sacrament. The day is further punctuated with communal chanting of the Divine Office seven times a day, and daily Mass.

Tyburn itself is the site of infamous Tyburn Tree, the gallows on which criminals were hung. During the era of Catholic persecution, many Catholic martyrs were hung, drawn, and quartered at the site – the penalty given for committing treason by being a Catholic.

In the crypt of the convent are many relics of some of the more well-known martyrs of the persecution, including Archbishop of Armagh and Primate of Ireland, St. Oliver Plunkett, who was the last Tyburn martyr.

LifeSiteNews contacted the convent and spoke with Mother Marilla via email, who generously shed further light on the brief comments she made to protestors at the weekend. She stated first of all that she could not allow herself to remain silent on the issue of the COVID-19 injections: “This is a subject that my conscience will not allow me to remain silent about.”

Before proceeding, Mother asked for prayers for the convent, anticipating backlash after her public witness, especially given that footage of her discussions with the protestors has already been rapidly spread across social media channels worldwide.

“I ask your prayers that our congregation may be protected,” she wrote. “The sisters are with me and are encouraging me to give this witness. We are desperate to save lives.”

— Article continues below Petition —
PETITION: No to mandatory vaccination for the coronavirus
Show Petition Text
1075270 have signed the petition.
Let's get to 1100000!
Thank you for signing this petition!
Add your signature:
Show Petition Text

Mother Marilla did not downplay the nature of COVID-19, explaining that five of the sisters, including herself, had had the virus, and some of the nuns had family members who died with the virus. “We know that many people have died from this manipulated virus and we are very sorry and we pray for the families.”

However, Mother stood firm on her warning about the injections, highlighting the large number of people who the nuns had been asked to pray for, after having had the experimental vaccine:

I am not against vaccines, in fact the opposite, I come from a medical family and would describe myself as pro vaccine. But these so called COVID-19 vaccines are still in the experimental stage, about these, I am vaccine hesitant.

Mother Marilla has been a religious sister for nearly 28 years, and in that time has “never been asked before this year to pray for anyone who has died from any vaccine.” Only on one occasion was she asked to pray for a young girl who had been paralyzed from a cancer vaccine. “Think about this, think about how many dozens of vaccines exist, in all the 28 years and in fact, I have no recollection from my whole life, of anyone being injured or dying from vaccine except the case in 2015.”

“However, this year, since January 2021, we have been asked to pray for over fifty people who have died from the COVID-19 vaccines,” said Mother Marilla. “This is not normal, we have never received requests like this.”

Mother then proceeded to relate to LifeSite some of the details of those who she had been asked to pray for, recounting numerous deaths and injuries occurring swiftly after the COVID injections.

One of the first prayer requests came from a close friend of the convent who works in the National Health Service (NHS) and took the injection with his colleagues in January. Five days later he informed the nuns that two of his colleagues, who were close friends, had died. He himself developed problems with his leg some months later, leading to difficulties walking.

Another prayer request came from another friend of the convent, who works as a General Practitioner, who was shocked to discover events in a local nursing home after the COVID injections were given (not by him). The residents of the home had caught the virus the previous year, resulting in two dying. However, after handing out the injection this January, eight residents died two weeks later.

“To ascribe this incident to mere coincidence would be grossly negligent,” wrote Mother, who also noted that staff were too frightened to speak out and report it.

Such a tale was mirrored in Ireland, where a friend of the convent reported that a nursing home injected all 50 residents in late January. Within two weeks 13 had died, and by March a total of 26 had died, “a mortality rate of more than 50%.” All the coroners who were approached refused to investigate the matter.

Mother Marilla revealed that the most common injuries the nuns are asked to pray for are blood clots. But prayer requests are not limited to this malady alone. One request came for a young woman who was paralyzed and unable to walk, after taking the injection in order not to lose her job. Others were from people who had gone blind.

Despite recounting numerous incidents of severe and debilitating side effects following the injection, Mother did not do so in order to spread fear, but to give hope. “We are praying for [those] still alive and they may recover,” she wrote.

“Everything is in God’s hands and nothing happens by accident. The most important thing that we must do at this point in history is to pray for souls, to pray for the salvation of souls. Suffering has great value, you can save many souls by offering up your suffering.”

The most important message Mother Marilla wished to share was the importance and power of prayer, and the reality of the battle between good and evil.

“In the end, what this crisis is about, is the battle between good and evil and what is at stake are souls. We must fight, and our weapons are the Holy Mass, the Divine Office, which is an extension of the Mass, Eucharistic Adoration, Lectio Divina and the Holy Rosary. Pray and fast and prepare for battle, prepare for a very great battle against the dark forces which surround us, that wish to enslave us. Now is the time to pray, now is the time to take up your weapons and fight. We know that Our Lord, our Eucharistic King has the victory and that the Immaculate Heart will triumph. But, at this very time — souls, souls are at stake, we must rise up and do battle to help save these souls.”