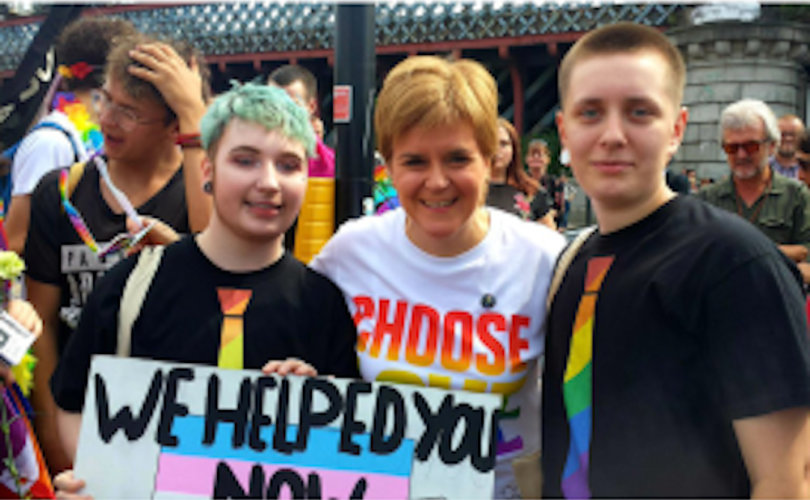 GLASGOW, Scotland, January 21, 2019 (LifeSiteNews) ― A Catholic secondary school teacher has spoken out against a mandatory LGBT program to be imposed on tax-funded Catholic schools in Scotland.

Pauline Gallagher risked her job by writing an essay published in the Scottish Catholic Observer about the difficulty of teaching Catholic doctrine on sexuality in today’s Catholic schools. It is the first public response of a Scottish Catholic teacher to the new LGBT materials, promoted by activists’ “Time for Inclusive Education” (TIE) campaign, to be implemented this year.

“As a dedicated (religious education) teacher in a Catholic school in Glasgow Archdiocese, I want to share fully the Church’s teaching and the Gospel with my pupils,” Gallagher wrote.

“In Scotland today, as the authorities prepare to embed LGBT-inclusive education across the curriculum, those who disagree with the unquestioned promotion of the LGBT agenda have lost confidence,” she continued.

“We are marginalised and branded as old-fashioned.”

Gallagher stated that she supported “inclusion” but “not without open debate and a full encounter with Gospel values and of the youth catechism on this issue.”

She said religious education teachers should be free to tell students what the Catholic Church teaches when they ask.

“When pupils ask their RE teacher a question about morality, including sexual morality, we should be free to share with them Catholic teaching even if it is not politically correct,” she wrote in the January 18 op-ed article.

“Pupils love engaging in the marketplace, or battlefield, of ideas. They may not agree with us, but they respect our right to speak. They are happy when a strong set of Gospel values is witnessed to,” she continued.

Gallagher noted that while the new LGBT curriculum prepared for the Catholic schools emphasize Catholic social teaching, they neglect to address Catholic teaching on sexuality.

“The new LGBT materials are extensive, scriptural, quote the Catechism and, as their point is anti-bullying, emphasise Catholic social teaching,” she wrote.

“Church teaching on sexual morality, on the other hand, is minimised and unclear in these materials,” Gallagher continued.

“This is a missed opportunity since the youth catechism alone deals comprehensively and eloquently with the sixth commandment.”

Gallagher told LifeSiteNews that there is only one short quote in the so-called “anti-bullying” material from Catholic teaching on human sexuality; it’s about the sacrament of matrimony, only with the words “man” and “woman” removed.

She shared her concerns with the Scottish Catholic Education Service (SCES), saying that although the curriculum materials were designed for anti-bullying, they should be inseparable from Catholic doctrine on sexuality.

“The response I received was based on the idea that there is no link between LGBTI Inclusive Education and sex education,” she said.

Meanwhile, some Catholic teachers have been told not to share Church teaching in this area.

“I know of teachers who have encountered opposition from management to clearly teaching Catholic doctrine on human sexuality within their school,” Gallagher stated.

“This seems to stem from anxiety about being targeted by parents or other outside agencies.”

The 30-year teaching veteran wrote in the Scottish Catholic Observer that Catholic religious education teachers no longer have freedom of conscience: “To be politically correct, we have to be compliant or vague.”

Regarding the dignity of people who experience same-sex attractions, the Church is already clear that “unjust discrimination” is unacceptable. According to the Catechism of the Catholic Church, “The number of men and women who have deep-seated homosexual tendencies is not negligible.

This inclination, which is objectively disordered, constitutes for most of them a trial. They must be accepted with respect, compassion, and sensitivity. Every sign of unjust discrimination in their regard should be avoided. These persons are called to fulfill God's will in their lives and, if they are Christians, to unite to the sacrifice of the Lord's Cross the difficulties they may encounter from their condition [CCC 2358].”

It should be noted that it is the inclination, not the person, that the Church teaches is “objectively disordered.” Meanwhile, like everyone else, people with same-sex attractions are called to a life of chastity according to their state in life. For those not married to a member of the opposite sex, this means refraining from sexual activity.

Gallagher told LifeSiteNews that other Catholic teachers are discussing the new LGBT curriculum.

“Responses vary,” she reported. “Some teachers admit to having grave reservations but feel reluctant to speak out.

“On the other hand, not everyone is convinced of the wisdom of applying Catholic doctrine on human sexuality to our culture and feel we must move with the times,” Gallagher noted.

“Some teachers fear that opposition to ideologies will be mistaken for prejudice against persons.”

Gallagher herself worried that people would mistake her objections to the new curriculum to indifference to marginalized people. In her original article, she spoke of witnessing, and abhorring, prejudice in Glasgow as a teenager in the 1970s.

“It is difficult to speak up,” she admitted. “I am apprehensive about negative reactions and consequences.”

So far, however, she has had only two negative reactions — one from a member of the Scottish Catholic Education Service disappointed by Gallagher’s critique, and one from a young man from the LGBT community who mistook the teacher’s remarks as an attack on himself.
Instead, Gallagher has experienced a wave of positive reinforcement, including from other teachers who also want to speak up, and told LifeSiteNews that she was “overwhelmed by the support.”

The teacher underscored that she doesn’t want to cause division, but she also feels that “there’s a certain amount of appeasement” in the Catholic Church right now “towards the strongest voices in Scottish society.”

Reflecting on the ongoing de-Christianization of western culture, Gallagher indicated that Catholic teachers haven’t been fulfilling their mission.
“I’m saying that we have been reluctant to teach our faith properly … and we need to face the collusion with activists who are calling for the ‘queering of society.'”

Gallagher said also that some people have been undermining Catholic doctrines on sexuality to allow LGBT ideas to go “unchallenged.”

As LifeSiteNews reported, last year, a Scottish Catholic priest was honored for his work on behalf of the LGBT activist group “Time for Inclusive Education.” Father Paul Morton subsequently blasted a fellow Catholic priest over social media for having hosted a rosary of reparation for sins committed during the 2018 Glasgow Gay Pride bacchanalia.

Gallagher told LifeSiteNews that she will contact the Scottish Catholic bishops with her concerns.

“I am hoping that the bishops who are sympathetic to the dilemma faced by teachers faithful to Catholic doctrine on human sexuality will consider supporting them publicly,” she said, via email.

“At the moment, the very idea of a dilemma is being denied by the Catholic authorities,” she continued.

Believing that an open forum for dialogue and debate is necessary, Gallagher plans to create a website for the purpose.

“We’re at a crossroads,” she added.

To respectfully make your views heard: