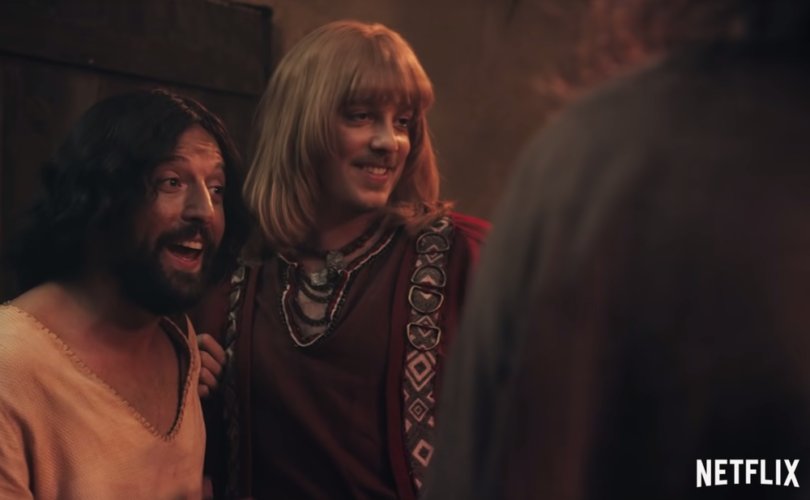 SÃO PAULO, Brazil, December 20, 2019 (LifeSiteNews) — Brazilian politicians have summoned online streaming service Netflix to explain before Brazil’s congress its release of a video depicting Jesus Christ as a closeted homosexual that has been deplored by Christians all over the world.

Basing itself on Article 208 of Brazil’s penal code, the Science, Technology, Communication, and Technology Committee of Brazil’s Chamber of Deputies, the lower house of Congress, denounced the Netflix video, The First Temptation of Christ, as a “vilification of religious worship” and an “assault on Christian values.”

On Tuesday, the committee voted to summon Netflix executives and demand a response in a hearing before Congress.

National Deputies Cezinha de Madureira, Julio Cesar Ribeiro, and Roberto Alves were among the most prominent in pushing for the summons, which was approved by a majority of the committee despite cries of disapproval by progressives such as former Sao Paulo mayor Luiza Erundina and Samia Bomfim.

So far, a date for a hearing has not been set. Legislators are facing a year-end recess, and will return after New Year’s Day when a hearing may be scheduled.

On Twitter, he wrote, “We are in favor of freedom of expression, but is it worth it an assault on the faith of 86% of the people?” President Bolsonaro himself has been a critic of the LGBTQ agenda, and has been forthright in defending his Christian faith.

Actor Gregorio Duvivier, who plays the role of Jesus, told Brazilian daily Folha de Sao Paulo that while the show’s “content may be offensive,” anyone taking offense is using “subjective criteria.” He added, “To the contrary of the calumny, the government does not have the right to decide what is offensive, because it doesn’t exist.”

There has been strong reaction against The First Temptation of Christ in Brazil and elsewhere. For example, more than 2 million signatures have appeared at Change.org, a website that allows visitors to create online petitions, demanding a stop to the Netflix special because it is “seriously offending Christians.”

Also, Bishop Henrique Soares da Costa of Palmares, Pernambuco, Brazil, is calling on Christians to cancel their subscription to the online streaming service. “I strongly urge Christians,” Bishop da Costa wrote on social media, “this Christmas to proclaim your love, your faith, your respect for Our Lord Jesus Christ; show that your love for Him is real and active: unsubscribe from Netflix and, in the appropriate menu, explain the reason: ‘disrespect for Jesus Christ, ‘disrespect for Christianity,’ etc. If you really believe and love the Lord, there is no other action to take … “

Bishop Joseph Strickland of Tyler, Texas, deplored the film and canceled his Netflix subscription. In a social media post, Bishop Strickland wrote: “Respect is the last thing they are thinking about, every Christian should denounce this film, it is blasphemy against the Son of God who suffered and died even for all who deny that He is Lord of the Universe. His prayer for them … ’Father forgive them, they know not what they do.’”

At least seven lawsuits have been filed against Netflix in Brazil over the video. One complaint was filed by Mayor Eduardo Tuma of São Paulo, and another was filed by the Don Bosco Association Center for Faith and Culture. Tuma is asking for nearly $245,000  in damages.

Yet another was filed by Robson Rodovalho, who founded the Sara Nossa Terra evangelical community. Attorney Ricardo Hasson Saye told daily Folha de São Paulo that he hopes each Christian offended by the film will demand at least the equivalent of $245 in compensation, which could mean that Netflix could face a possible loss of $1.2 billion, he said.