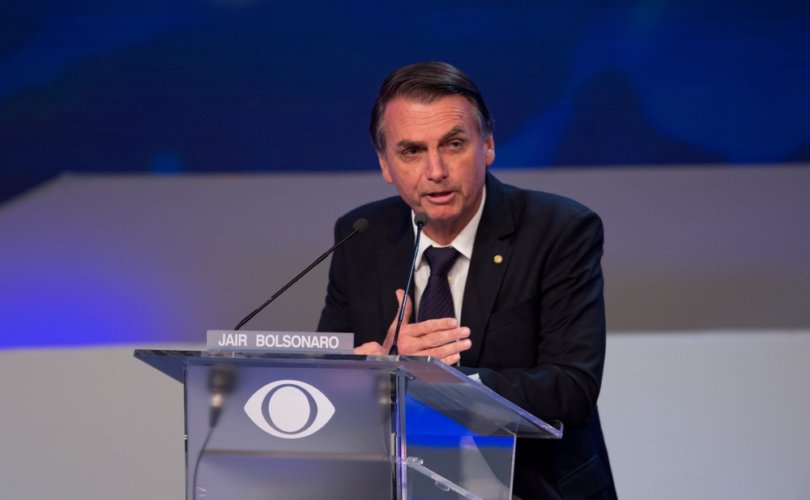 BRASILIA, Brazil, October 28, 2018 (LifeSiteNews) – Today is a new day for Brazil.  Jair Bolsonaro has been elected president, putting an end to a generation of leftist rule.  Under Bolsonaro, Brazil could go from being a refuge for Latin American marxists and their corrupt globalist allies to becoming an invaluable ally to President Trump’s vision of a region where governments are motivated by their sovereign interests.  Most importantly, Brazil will go from being a promoter of the Culture of Death, to a defender of the Culture of Life.

Faced with this reality, the worldwide liberal media has attempted to label Mr. Bolsonaro as an extremist. He’s a “racist,” a “sexist,” a “homophobe,” a “misogynist.” He’s a “neo-nazi” who wants to bring the military dictatorship back! That, more or less, is what Jair Messias Bolsonaro’s opponents are saying about him. But who is he? Some call him the “Brazilian Trump.” But in order to understand who he really represents, we have to understand a little of Brazil’s recent history.

In 1964, Brazil’s Army, answering a legitimate call from the civil society, decided to take over power in order to avoid the communist threat that was before countries all over the West at the time. In the beginning the military assured civil society that they would give the power back to a civilian government as soon as possible, but soon an internal division took shape within the military itself, which resulted in a “coup inside the coup.”  In the end, the military stayed in power until 1985, when they made good on their promise and started a process of transition to civil government.

During the years of the military regime, the communists acted in two different fronts: through the guerrillas and through a cultural strategy they learned from Antonio Gramsci, one of the founders of the Italian Communist Party. The aim was to attain what Gramsci called hegemony, i.e., to make the whole population think in a socialist way as a result of their infiltration of the media, the universities, and all major cultural elements of society.

The strategy worked, and after the promulgation of the 1988 Constitution, the seventh in Brazil’s history, leftists controlled all presidential elections, with very few exceptions. The main political rivalries were between the radical leftist PT (Worker’s Party) and the center-left PSDB party (Brazilian Social-Democracy Party).

In 1990, after the fall of the Berlin Wall, Lula and Fidel Castro founded the Foro de São Paulo (São Paulo Forum), an international organization that gathered the main leftist political parties, organizations, and even terrorist groups like the FARCs from Colombia, with the aim of establishing a Latin American version of the old Soviet Union.

Election after election the members of the FSP gained power in different Latin American countries: Hugo Chávez in Venezuela, Evo Morales in Bolívia, Lula in Brazil and so on.

In Brazil nobody really knew about this secretive organization in the mainstream media.  It took one man, the philosopher Olavo de Carvalho, to uncover the truth about this corrupt leftist cabal in Brazil and Latin America. Back in 1996 Olavo de Carvalho argued that the leftists were gaining a dangerous stranglehold on power when many people assumed that the fall of the Berlin Wall had brought Communism to an end.

Olavo de Carvalho was the man responsible for uncovering what the left was doing in Brazil and throughout the Americas. His online philosophy course, his books, his old podcast and his Facebook profile started to reach hundreds of thousands of people, even millions of them.  Just as in Trump’s case, this conservative revolution would not be televised, it would be carried on the wings of social media.

Among those exposing the corrupt machinations of the Foro de São Paulo were many  committed and politically savvy pro-lifers who have organized effectively to reach politicians such as Jair Bolsonaro and make them embrace the Culture of Life.

The political history of Jair Messias Bolsonaro is fairly common for politicians.  Bolsonaro entered politics when he retired from the Brazilian Army, becoming a federal deputy in 1990.   However, his rise to national prominence was anything but common.  In 2003, he started to gain media attention because of an argument about law and order that he had with a communist politician, Maria do Rosário. Bolsonaro had proposed that the legal age at which a person could be charged as an adult be lowered from 18 to 16.  Maria do Rosário argued against the reduction even in the case of a terrible crime committed by the 16 year old rapist Roberto Aparecido Alves Cardoso, known as Champinha (he, along with a gang of four other guys raped, tortured and murdered the girl Liana Friedenbach with her boyfriend Felipe Caffé).

In 2011, Bolsonaro was also one of the most vocal people denouncing what became known as the “gay kit,” a set of sex-ed materials for children as young as 6, designed by the then Minister of Education and now candidate for the presidency Fernando Haddad, a communist and member of the Workers Party.

As with President Donald Trump, a lot of people consider some of Bolsonaro’s public statements to be controversial, due to their boldness and directness, but this is precisely why Bolsonaro started to become so popular. He was one of the only ones willing  to publicly attack what the communists from the Workers Party (PT) were doing: the destruction of the family through gender ideology and early sexualization; the defense and even the promotion of organized crime as a stylish way of life; the promotion of abortion; the deep corruption scandals – perpetrated at a scale never seen before by Lula and his gang – that battered Brazil; the endemic violence that has affected the country (claiming at least 60,000 murders per year).  In all of these areas, Bolsonaro has not held back and has offered bold conservative solutions which have resonated with the people of Brazil.

Because Bolsonaro has never been involved in a corruption scandal, he has been able to channel all the feelings of frustration against the Worker’s Party.  Yet, the media has been merciless with Bolsonaro.  And although he has no corruption scandals attached to him, the left (which in Brazil includes the entire mainstream media) has attacked him based on his style and boldness.   This hypersensitivity on the part of the hardcore left is very similar to the movement across much of liberal America, where university students demand safe spaces in which what they consider offensive speech cannot harm them.  In Brazil this group is referred to as the “caviar left”: people who love to virtue signal and preach about social justice but who demand to live their personal lives completely disconnected from the majority of society.

Bolsonaro has broken through the leftist’s cultural monopoly with his bold brand of conservative free speech, and now the leftist media is in a conundrum on how to deal with it.  At home and abroad, the media have done nothing but spread the same unsubstantiated claims: that he is a “racist, misogynistic, homophobic, a fascist, a neo-nazi”, etc. Of course, these claims are easily refuted by the fact that Bolsonaro has supported prominent female politicians, some of them Jewish and other politicians from racial minority groups.  Also, although Bolsonaro is a Catholic and has spoken out against the imposition of gender ideology, his tough stance on corruption and crime has earned him the support of many who self-identify as homosexual.

Of course, the real reason why Bolsonaro’s critics are spreading all of these rumors about him is the he represents a real threat to the Latin American communist plan materialized in the São Paolo Forum.  If he is elected, the radical left will not be able to work hand in hand with the organized crime syndicates headquartered in Venezuela and reaching towards Iran and the Colombian FARCs.

Mr. Bolsonaro has pledged to stop the advance of the Culture of Death in Brazil, which has always been a top priority among the globalist elite.  This would mean a severe blow to those who have been working for a generation to undermine the roots of the Christian Western Civilization.

No, Bolsonaro is not racist, misogynistic, homophobic, or a fascist, he is a patriot who is willing to give his life for his country, a country which has suffered for decades at the hands of a gang of leftist ideologues who almost succeeded in destroying Brazil.   Mr. Bolsonaro’s party’s motto is “Brazil Above Everything, God Above Everyone.”  This combination of a belief in national sovereignty and recognition of the proper role of God has the atheist left absolutely terrified.