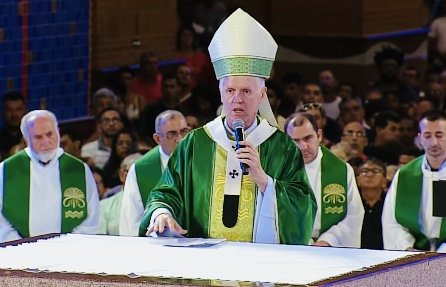 SAO PAULO, Brazil, October 17, 2019 (LifeSiteNews) — Archbishop Orlando Brandes said in a Sunday homily that critics of the Amazonia Synod are not only “violent” and “unjust” but possessed by the “dragon of traditionalism.”

Speaking at the basilica of Aparecida, located about 125 miles northeast of Brazilian metropolis São Paulo, Archbishop Brandes said, “Of course, in sacred scriptures, the dragon is Satan: the evil that is organized in the world.” He added that the Virgin Mary seeks to “address the inroads the devil, which are corruption, takes away bread and increases social inequalities.”

On the feast day of the patroness of Brazil, Our Lady of Aparecida, Brandes called on God Almighty to protect the synod currently meeting in Rome that has brought together bishops, priests and activists to discuss ecclesial and environmentalist concerns affecting the countries of the Amazon basin. Critics of the synod have deplored statements by bishops and religious and have voiced concerns over suggestions of doing away with priestly celibacy, for example. Criticism of apparent non-Christian images and rituals introduced to the Vatican and the Basilica of St. Peter has also been voiced.

Brandes was named to his bishopric by Pope Francis.

Brandes asked for divine protection of the deliberations at the Vatican, which “are thinking about the lives of those trees, those rivers, those birds, but especially about those peoples. Many of our family members are there.”

“Free us from evil,” said Brandes in the second-largest basilica in the world, “and then we will be free so that in Brazil our children will no longer be killed by stray bullets, our young people will no longer commit suicide, and our old people will have a decent place to live and survive.”

“Everyone knows that it is true that we have many people of traditionalist views who do not accept the Vatican, the Pope. Sometimes with different names, with old names. They are very old groups, there has always been in the Church the ideology of the left and the ideology of the right, and we cannot be ideological, we must be people of truth. Ideology always seeks its own interests. The truth is a person: Jesus Christ, and his gospel,” Brandes said.

Approximately 170,000 assembled at Aparecida to celebrate the solemnity. The Aparecida basilica is the largest Marian shrine in the world and has a capacity for 45,000 worshippers.

However, in a second Mass celebrated Sunday at the huge church, Brandes appeared to soften his words because Brazilian President Jair Bolsonaro was present. Bolsonaro, who media have portrayed as right wing, has been critical of environmentalist appeals about climate change and degradation of Amazonian forests.

Bolsonaro recently said that participants at the Synod do not necessarily represent all Catholics. A recent sign of friction between the pontiff and Bolsonaro was that the president did not appear at the canonization of a Brazilian saint this weekend.

As Bolsonaro listened during the Sunday Mass, Bishop Brandes appeared to alter his homily. In the second Mass, Brandes said that “dragon” Brazil faces is in the form of “ideologies” rather than “traditionalists.” The archbishop said “ideologies” of the “right and left” are the “dragon that attack from all sides.” “These dragons are ideologies,” Brandes said, adding, “Ideologies, I mean to say are personal interests, of the right and the left. This is not good. It’s good, my brothers and sisters, to seek the truth. It’s truth that frees. It is truth that gives us peace. And it is the truth that allows us to live as brothers and sisters.”