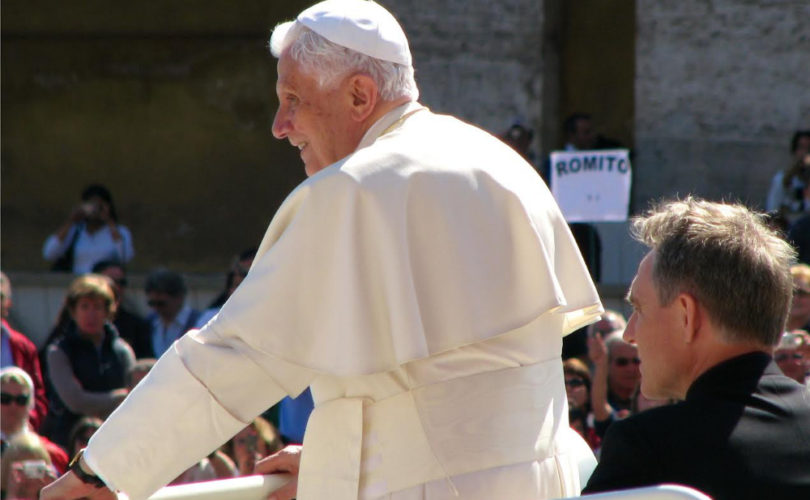 VATICAN CITY, October 28, 2019 (LifeSiteNews) ― A Brazilian bishop made a detailed argument in favor of women being admitted to the permanent diaconate Friday.

Bishop Evaristo Pascoal Spengler of Marajó, Brazil stated at Friday’s post-Synodal meeting that Pope Benedict XVI himself had opened the way canonically to the “ordination” of women as deaconesses.

In response to a question by LifeSiteNews’ Diane Montagna concerning Christ’s establishment of a male priesthood, Spenger said:

“I was saying [before] that Pope Benedict XVI, he disconnects the ministry of the diaconate from Christ the head. So canonically this opens the way to the ordination of women as deaconesses, not as priests or bishops.”

During his presentation in the Holy See’s press hall, Spengler had argued that the recovery of the permanent diaconate by the Second Vatican Council and a change to canon law by Benedict XVI “leaves the road open for the ordination of women” to the diaconate.

“…Vatican II takes up the issue of the diaconate for married men, and the diaconate for married men is based on argument that men exercise in the Church a diaconal service, and it would be good to ordain them so that they can do this more effectively. That’s good and useful for the Church. We think that this is a very valid argument for the ordination [sic] of women as deaconesses in the Church,” Spengler said.

“Pope Benedict XVI made a very important step down this road. He changed Canon 1009 in the Code of Canon Law, which used to say that bishops, priests, and deacons receive the mission and faculty of acting in the name of Christ the head. He changed these words of the canon, and said that from that moment, deacons no longer no longer act in the name of Christ the head. To the contrary, they are given the capacity to serve the People of God in the diaconia of the liturgy, the word and charity,” the bishop continued.

“So here we perceive that this leaves the road open for the ordination of women [to the diaconate].”

Spengler acknowledged that the Church “deserves” a better foundation to determine what kind of formal women’s ministry “is found in the Church,” but cited Galatians 3:28, where St. Paul said: “There is no longer Jew nor Greek, there is neither slave nor free, there is neither male nor female; because all are one in Christ.”

There are serious blocks to the “ordination” of women to any ministry, however. Stemming from from the perennial tradition of the Church, Canon 1024 states that “a baptized male alone receives sacred ordination validly.” Although St. Paul does mention “deaconesses,” contemporary scholars investigating the issue have been unable to come to a consensus that women were ever ordained to the diaconate “with the same form and the same aim as the ordination of men,” as Pope Francis told reporters this May.

At the beginning of his presentation to the press, the Bishop of Marajó said that “40 percent of participants in the preparations for the synod asked to be discussed: the topic of an official ministry for women in the Church.”

The Brazilian bishop cited women’s participation in salvation history, recorded in the Old and New Testaments, and the presence of women’s leadership in ecclesial communities in the Amazon region.

“If we look at women in the Amazon region, more than half, perhaps more than 60 percent of the communities are coordinated―are directed―by women,” Spengler said.

He said the “the people” compare the situation of the Catholic Church in the region with Evangelical Christians, especially the Pentecostals, who have pastors living among them, whereas Catholic priests visit communities in the interior of the Amazon region only twice a year at most.

“Pope Francis has insisted that the Church should be a Church of presence, not only a visiting Church,” the bishop reported.

The topic of women’s leadership in the Catholic Church was addressed by other panelists at Friday’s press conference.

Sister Inés Azucena Zambrano Jara of the Missionary Sisters of Immaculate Mary and St. Catherine of Siena stated in her presentation that the 35 women invited to the synod sometimes called themselves the “Mothers of the Synod.”

“We felt responsible throughout the synod. So, there were times when we heard and said to ourselves ‘Mothers of the Synod,’” she continued.

When asked what difference there would be between her current activities and those that would follow upon her becoming a deaconess, the Colombian missionary said the innovation would “reaffirm” her “baptismal commitment” and her order’s identity.

Sr. Inés admitted that the sisters found it a challenge to cede pastoral authority to the people they serve.

“In many places, we are alone, as members of a congregation, but very accompanied by the indigenous as [their] servants,” she said.

“I think it is beautiful because in fact it is difficult for us to put aside a leading role.”

The missionary said that what they were fighting for was to “place value” on peasant women.