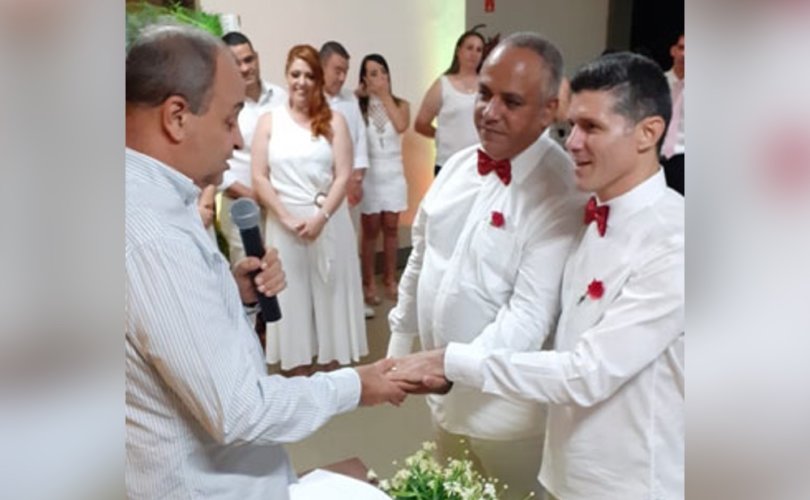 A video of the Dec. 7 ceremony showed Father Vicente Paula Gomes (56) humorously stating that he was “trembling a little,” given that he was giving such a blessing to homosexuals for the first time. Gomes was not wearing liturgical vestments during the ceremony, but was dressed entirely in white as where the rest of the wedding party. There were no liturgical objects apparent in the video.

Allowing the two men to kiss after exchanging promises, the priest playfully turned his back and covered his eyes.

“We think that [at] home a man and a woman are enough. Family is not only that. To become a family means to create conditions for a dignified life. That’s why I’m happy to be here,” the priest said during the ceremony.

Referring to his bishop, the priest said: “I am already thinking about what Dom Argemiro [de Azevedo] is going to say on Monday, but, as I said initially, the blessing does not diminish me, nor will it diminish the Church, nor you.” He told the two men that they should declare their homosexual love for each other “before God” and to have the “courage to make it known to your friends and the Holy Church.”

Gomes admitted that the Catholic Church does not recognize same-sex “marriage.” He said, “Of course I cannot give this sacrament, but I pour the blessing on you so that you have the duties of companions until the end of your lives. And do not forget that God blesses your love now and forever.”

A document from Bishop Argemiro de Azevedo referred to what it called “grave accusations” against Father Gomes, who last month “celebrated a homo-affective union” of two men, Luis Carlos dos Santos and Claudinei Batista de Almeida, in Assis, a city near metropolitan São Paulo in Brazil.

The letter cited the canon law of the Catholic Church, which sanctions clerics who give scandal to the faithful. The bishop suspended Gomes’ from his duties as pastor at a parish. He was due to become parochial vicar of a church in the diocese on Monday. However, it was not clear what the disposition of that appointment was as a result of the sanction.

The Catholic Church teaches that homosexual acts are “intrinsically disordered” since they are “contrary to the natural law” and they “close the sexual act to the gift of life.” The Church also teaches that same-sex attraction is itself “objectively disordered” since God created sexual attraction to be between a male and female for the sake of procreation. In this way, there is no such reality as a “homosexual person,” but only a person who struggles with the “disorder” of being attracted to the same sex.

AssisCity, a local news outlet, reported that one of the two men in the union blessed by the priest said that homosexual unions are loving, not sinful.

Claudinei Batista de Almeida said, “We are living in turbulent times, we often realize a widespread hatred of people who want to impose their way of being or their thinking. We were among friends, dear people and it was cool, cool, we had so much fun! That this is a way to break prejudice and so that new doors can be opened, so that people can see in a different way that the union between homosexual couples is not a sin, but love.”

In the letter signed by Bishop Azevedo and diocesan chancellor Father David José Martins, Father Gomes was informed that a precautionary measure has been laid against him. The document read, “Considering the serious allegations against Father Vicente Paula Gomes, who has celebrated a homosexual union […], an act performed at a party hall in the city of Assis, […] I decree the suspension of order ad cautelam (temporarily).”

The letter cited canon law of the Catholic Church. For example, it referred to Can. 1399, which says: “In addition to the cases established here or in other laws, the external violation of a divine or canonical law can be punished by a just penalty only when the special gravity of the violation demands punishment and there is an urgent need to prevent or repair scandals.”

The decree of the Diocese of Assisi also declared that once an investigation and canonical proceedings in the matter have concluded, the precautionary measure could be lifted. The measure was promulgated on December 12. Gomes has a popular radio show and is well known in his diocese.

Pope Francis named Bishop Azevedo to his current see in 2016.

German Cardinal Reinhard Marx, a close advisor of Pope Francis, called for the Church to grant liturgical blessings to homosexual unions. In a 2017 radio interview in Germany, Marx said that “closer pastoral care” must be given to homosexuals, while priests and pastoral workers should be called on to “give people in concrete situations [of homosexual unions] encouragement. I do not really see any problems there.”