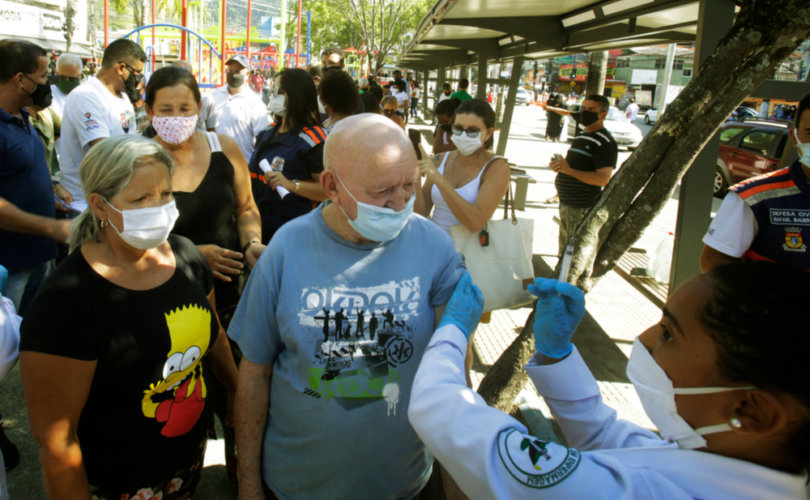 TOLEDO, Brazil (LifeSiteNews) – A Brazilian city planning to study Pfizer’s COVID-19 shot by vaccinating its entire population has been conducting “active searches” of the unvaccinated in an effort to get jabs in the arms of every resident age 12 and older.

The city of Toledo agreed this summer to test the safety and effectiveness of the Pfizer-BioNTech vaccine using its own residents. Toledo, located in the state of Paraná in southern Brazil, has a population of around 143,000.

“The initiative is the first and only of its kind to be undertaken in collaboration with the pharmaceutical company in a developing country,” Pfizer said in a statement. The study, which will track participants for one year to evaluate vaccine protection and coronavirus variants, seeks to investigate COVID transmission in a “real-life scenario,” Pfizer said.

While the trial is voluntary, tactics employed by the city have raised concerns for residents’ privacy and medical freedom.

By the time Pfizer announced the Toledo experiment three weeks ago, fully 98 percent of eligible individuals had been vaccinated with their first dose of a COVID-19 shot. In order to reach 100 percent vaccine coverage, Toledo began conducting an “active search” for unvaccinated people, in the words of the municipal health secretary.

“Even though the maximum delay time doesn’t exceed one week (…) we have been working hard with awareness of the population and active search for those who do not attend the vaccine points,” said health secretary Gabriela Kucharski, according to regional news site Paraná Portal.

Kucharski had made similar comments in a government press release in July. “We had a small problem with the public between the ages of 65 and 69, which was solved through an active search for these patients,” she said.

Another statement from the government of Toledo last week lamented lagging demand for vaccination during a vaccine campaign this month and announced that basic health units were going to “intensify” with another “active search” of those behind on their jabs.

“We ask that everyone continue to seek the units for the regularization of vaccination cards and the updating of registration data,” said health surveillance director Juliana Beux Konno. “We hope these numbers improve. Now the units are going to intensify through active search of these populations with overdue vaccines and improve vaccination coverage in the municipality.”

LifeSiteNews contacted Kucharski’s office for clarification as to how the city has pursued unvaccinated individuals and on the city’s data collection, but did not receive a response.

Toledo’s tactics appear to have had an effect, in any case, with 61 percent of the population age 12 or older “fully vaccinated” as of last Friday, up from 56 percent in early October. The city also reached 99 percent partial vaccination among eligible residents by October 20.

The high vaccine uptake in Toledo includes an exceptionally high vaccination rate for adolescents, around 92 percent of whom received their first jab by last week. Pfizer had delivered an exclusive shipment of 35,000 vaccines to Toledo upon announcing the trial in August as part of a vaccination campaign targeting young people in the city.

Recruitment for the Pfizer trial is expected to begin later this month and enlist 4,500 participants over the next six to nine months.

The Toledo study follows a similar one earlier this year with Sinovac’s COVID vaccine in the Brazilian town of Serrana. That experiment, led by Brazil’s Butantan Institute, was considered to be “the first mass trial of its kind in which an entire town was vaccinated against the coronavirus before the rest of the country,” according to The New York Times.

Pfizer’s experimental trial in Toledo comes as the pharmaceutical giant faces sharp criticism for its business dealings in Brazil and other Latin American countries.

An investigation by progressive advocacy group Public Citizen revealed last week that Pfizer demanded as part of a deal with Brazil for 100 million COVID vaccine doses that the Brazilian government not make “any public announcement concerning the existence, subject matter or terms of [the] Agreement” or its dealings with Pfizer without the company’s consent.

Under the terms of the agreement, Brazil is also required to seek Pfizer’s approval before receiving donations of the Pfizer vaccine and before purchasing or donating the shots.

Pfizer additionally pushed Brazil, along with Chile and Columbia, to waive sovereign immunity, including “any right of immunity which either it or its assets may have or acquire in the future.”

A previous investigation by the Bureau of Investigative Journalism reported in February that Pfizer asked Brazil “to be indemnified and asked the [Brazilian Ministry of Health] to put up sovereign assets as collateral, as well as create a guarantee fund with money deposited in a foreign bank account.”

The Brazilian government initially condemned the terms as “abusive,” though later agreed to many of the same provisions.

Tim Jackson contributed to this report.