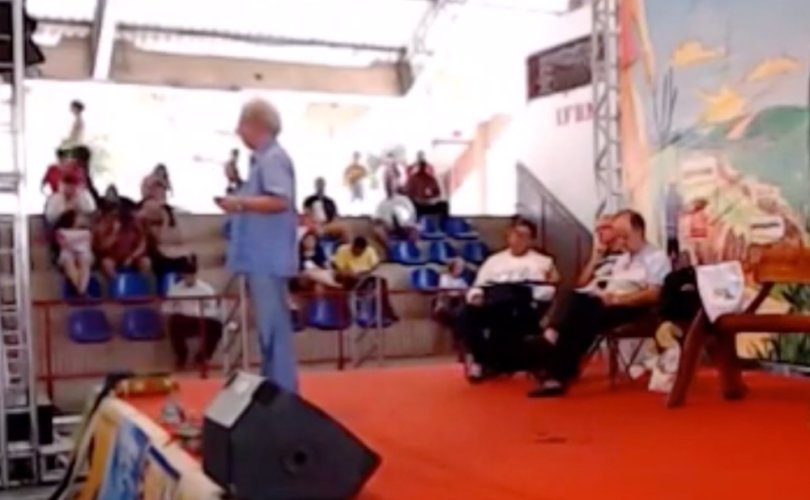 NATAL, Brazil, September 26, 2019 (LifeSiteNews) ― A liberation theologian told an audience that they must “seize” the Pan-Amazonian Synod.

Video footage has emerged of Domincian priest Carlos Alberto Libanio Christo, better known as Frei Betto, 75, telling an audience at the 11th National Summit for Faith and Politics this July that it would be better not to “propose liberation theology” in order to achieve their goals at the synod.

“There is one issue that can be a gateway for the mobilization of many people: let’s not start by speaking of liberation theology straight away; this scares people,” he said, speaking in Portuguese.

He added: “We need to mobilize and seize the Pan-Amazonian Synod, which is a synod of the greatest importance.”

The video concludes with Frei Betto, who once advised for the now disgraced former President of Brazil, Lula de Silva, saying that the synod would “anger the Bolsonaro government.”

Jair Bolsonaro is the current president of Brazil and has most recently been in the news for asserting to the United Nations the sovereignty of Brazil over its territory in the Amazon and blasting the country’s former regime.

According to PBS, Bolsonaro said: “My country was very close to socialism, which led us to a situation of widespread corruption, serious economic recession, high crime rates and continuous ceaseless attack against family and religious values that are part and parcel of our traditions.”

Bolsonaro decried the idea that the Amazon belongs to the world and accused foreigners of sentimentalizing its indigenous peoples.

The 11th National Summit for Faith and Politics was hosted in the Archdiocese of Natal, the capital city of the state of Rio Grande do Norte, in Northeastern Brazil, between July 12 and July 14, 2019. It was promoted with the assistance of the Service of Rural Assistance of the Archdiocese of Natal, and its theme was “Democracy, Public Policy and Social Alternatives.”

Ricardo German, a Brazilian student of philosophy and theology at Edinburgh University, told LifeSiteNews via social media that Frei Betto is a proud socialist.

“Betto openly considers himself a socialist, going as far as to affirm that socialism is “the political term for ‘love,’” German said.

“He was a political advisor to, and personal friends with, Brazil’s former president and convicted money-launderer and embezzler Lula da Silva―an advocate for same-sex ‘marriage’ and abortion―as well as to Cuban dictator Fidel Castro,” he continued.

German recalled that Frei Betto is also in favor of the legalization of abortion, having once said, “Even though I am against abortion, I support its decriminalization in certain cases.” The Dominican priest doubled-down by saying, “The State is secular and must have the right to defend the lives of the poorest women by ceasing to criminalise abortion, which does not entail supporting it.”

In a 2013 interview with Inter Press Services, the liberation theologian declared that his movement should not be consigned to the past.

“Liberation theology still plays an important role in the Latin American Catholic Church, especially in and through basic Christian communities, Bible reading groups, and meetings like the forthcoming National Conference on Faith and Politics in Brasilia in November,” he said.

“I believe, moreover, that this school of thought has compelled papal discourse on social affairs to change. Recently pontiffs have been more forceful about these issues, shown by the criticisms of neoliberalism voiced by John Paul II and Benedict XVI, or on the positive side, the visits they both made to Cuba.”

Pope Francis had recently been elected, and Frei Betto said that he was hopeful about the pontificate of “Pope Chico Bento”:

“I am very hopeful about the pontificate of Pope ‘Chico Bento’ …  because he is Latin American. He is open to social questions and, above all, committed to defending the rights of the poor.”

Ricardo German explained to LifeSiteNews that Chico Bento is “a character from a very popular series of comic books for young children in Brazil, ‘Turma da Mônica’. He lives in a rural town and is known for being the stereotypical Brazilian ‘farm kid,’ loving the country life, nature and animals.”

Frei Bento predicted that the Argentinian pontiff would have to allow debate on controversial matters:

“Pope Chico Bento will have to open up debate within the Catholic Church on urgent, burning issues that have long been kept on ice: an end to mandatory celibacy, ordination of women to the priesthood, condom use, biogenetics and the reform of the Roman Curia,” he said.