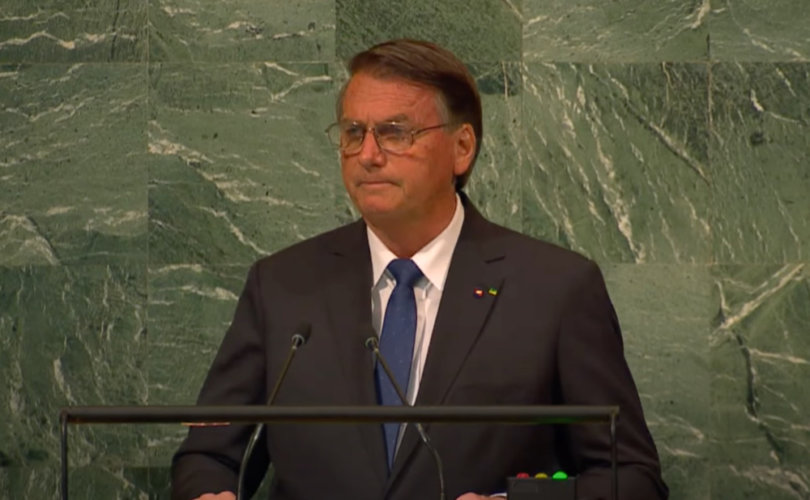 NEW YORK (LifeSiteNews) – During an address given at the United Nations General Assembly on Tuesday, Brazilian President Jair Bolsonaro offered refuge in his country for Catholic priests and nuns being oppressed in Nicaragua.

“Under my administration, Brazil has made an effort to bring the right to freedom of religion to the very core of the international human rights agenda,” Bolsonaro said toward the end of his speech. “It is essential to ensure that everyone has the right to worship and practice their religious orientation without any discrimination whatsoever.”

I would like to inform here that Brazil stands ready to welcome the Catholic priests and nuns who have suffered persecution by the dictatorial regime in Nicaragua. Brazil repudiates religious persecution wherever it may occur in the world.

Bolsonaro continued to share that “other fundamental values for Brazilian society with the implications to the human rights agenda include the defense of family values, the right to life since conception, the right to self-defense and the repudiation of gender ideology.”

The president concluded his speech with a statement that Brazil is “a people that believes in God, the homeland, family, and freedom.”

His address comes after Nicaraguan Bishop Rolando Alvarez, who consistently opposes the authoritarian government, was arrested on August 19. Alvarez’s arrest occurred during an investigation launched by the country’s national police, who were looking into the bishop’s alleged “acts of hatred.”

Previously, the government ordered the shutdown of seven Catholic radio stations, all of which were connected to Bishop Alvarez.

On Monday, the European Parliament released a resolution condemning the repression against the Catholic Church and others in Nicaragua. A resolution passed by a large majority of the parliament called for the “immediate and unconditional release of all those arbitrarily detained, including Bishop Álvarez and those detained alongside him, and for all legal proceedings against them to be annulled […].”

That same day, the Nicaraguan government banned processions which were set to take place this week in honor of St. Michael the Archangel.

The Archdiocese of Managua, led by Bishop Alvarez, said in a statement that it is relying on the intercession of St. Michael, St. Jerome, and Our Lady, Queen of Peace for healing in the country.

Pope Francis has not condemned the government’s persecution of the Catholic clergy, but instead called for “dialogue,” expressing his “conviction and […] hope that through means of open and sincere dialogue, one can still find the bases for respectful and peaceful co-existence.”