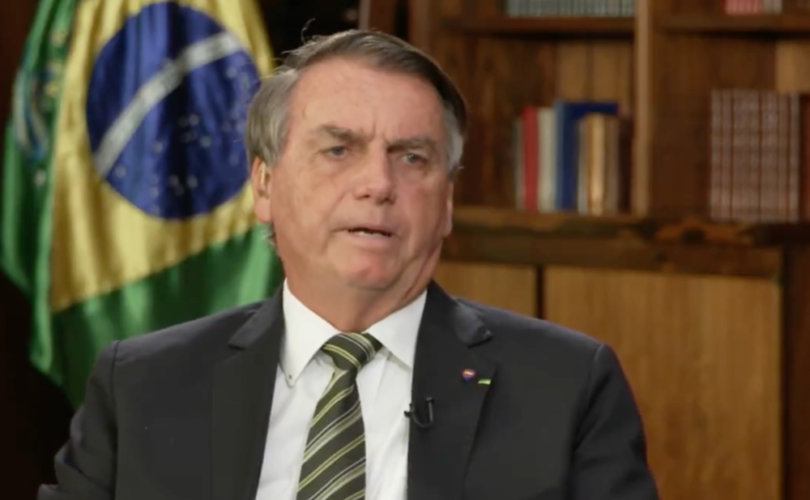 BRASILIA, Brazil (LifeSiteNews) – The President of Brazil Jair Bolsonaro sat down with FOX News’ Tucker Carlson last week for an interview dealing with COVID and his response to the virus, why he refused the jab, alternatives to the jab, and the “taste of dictatorship” which many leaders felt as a result of lockdowns.

Jair Bolsonaro explains why he didn’t get the COVID vaccine and his approach to the virus. pic.twitter.com/mpzCYk4Oht

Bolsonaro explained that when in March 2020 he noticed the number of COVID cases increasing in Brazil, he began to seek out medications against the virus.

Speaking about the jab, Bolsonaro explained “now someone who contracts the virus, like I did, I mean, the [jab] doesn’t really help. I mean, you don’t take a vaccine if you have already been contaminated. The [jab] would be innocuous. You should rather take the medication.”

I called other countries, including sub-Saharan Africa, and Brazilian doctors and physicians, because there were people out there who either did not catch the virus, or when they did catch the virus, the virus was not strong enough to send them to the hospital or to kill them. And in Brazil, we saw the emergence of two medications that began to be used more widely. I myself took them when contaminated. But the global pressure, all over the world, from the media outlets, and from the pharmaceutical companies … they were all against the early treatment.

Speaking about Pfizer’s vaccine contract with the Brazilian government, Bolsonaro recalled “one of the clauses said ‘we shall take no responsibility whatsoever for any side effect arising from the vaccine.’”

“I became concerned about that,” he said. “And Congress in Brazil decided to vote, and pass a piece of legislation saying that Pfizer, or any other pharmaceutical company, would not take responsibility for any side effect arising from the [jab].” Bolsonaro refused to make the jab mandatory in Brazil, saying that the Brazilian Congress would not make it mandatory either.

The injections are known to have serious side effects, including myocarditis. Other side effects include multiple sclerosis, Guillain-Barre syndrome, female infertility, pulmonary embolism and testicular cancer, according to data from the Pentagon’s Defense Medical Epidemiology Database (DMED). The World Health Organization (WHO) in January advised that children should not be routinely jabbed against COVID-19 with Pfizer’s jab.

Coronavirus vaccine trials have not produced evidence to suggest that the vaccines stop either infection or transmission, nor do they claim to reduce hospitalization, but the measurement of success is in preventing severe symptoms of COVID-19 disease. Moreover, there is strong evidence that the “vaccinated” are just as likely to carry and transmit the virus as the unvaccinated.

Bolsonaro told Carlson that “the concern, as mentioned by many doctors, was that people who are infected by the virus were already immune, and did not have to take the [jab]. That was my case, and that’s why I did not take [the jab].”

READ: Dr. Vladimir Zelenko was a true hero and patriot who saved many lives with his COVID treatment

Bolsonaro had defended natural immunity against COVID-19, holding that natural immunity is more effective at stopping infection than the jabs. His view is shared by medical experts such as Dr. Peter McCollough, who told LifeSiteNews in August 2021 that “natural immunity is the best of all forms of immunity” and that “under no circumstances” should a recovered patient get a COVID jab.

Bolsonaro also explained that he had enough jabs brought to Brazil for every Brazilian, although he defended a person’s freedom of choice with regard to the jab, but that he regrets not holding pharmaceutical companies accountable for the side effects of the jab. “We see in studies conducted outside of Brazil that perhaps two thirds of deaths could have been avoided in Brazil and in the world” as a result of the jabs, he said.

Speaking of ivermectin and hydroxychloroquine, Bolsonaro said that “in sub-Saharan Africa, they take ivermectin to fight river blindness, as well as hydroxychloroquine to fight malaria.” He expressed “regret” for “the pressure that took place, and perhaps due to the economic power of pharmaceutical companies” who ignored such treatments and instead “went and invested in [jabs].”

“And today, you see, you know people who have taken the third, the fourth dose of the [jab], and they still contract the virus and die … I believe many deaths could have been avoided through early treatment,” Bolsonaro continued.

Ivermectin and hydroxychloroquine are known to be effective means to combat COVID-19, but have been lambasted in the mainstream media and by mainstream medicine. Bolsonaro denounced the suppression of ivermectin and hydroxychloroquine before the United Nations last year, saying that the choice of medical treatment should be between the patient and the doctor.

This year, U.S. Secretary of Health and Human Services Xavier Becerra contracted the coronavirus twice in less than a month. Canadian Prime Minister Justin Trudeau announced twice in six months that he caught the virus. Dr. Anthony Fauci, who received the jab four times, tested positive for the coronavirus on June 15, 2022, and subsequently experienced a “rebound” of symptoms after taking Pfizer’s anti-viral pill Paxlovid. According to Fauci, the rebound was “much worse than in the first go-around.”

Bolsonaro also discussed the consequences of lockdowns caused by COVID-19, and their effect on government. “Many heads of state ended up imposing their will, and they felt the taste of dictatorship,” Bolsonaro began.

“In Brazil, state governments felt the taste of acting as dictators by mandating that people should stay at home, and shutting down shops, and not allowing people to go to school, if they had not been [jabbed].”

“They could do everything during COVID,” Bolsonaro continued. “And more importantly, when it came to the public weal itself, I mean, many things could be purchased by governors and mayors, although many of them, or the vast majority are honest, they were nevertheless able to buy just about anything without much of a sense of responsibility.”