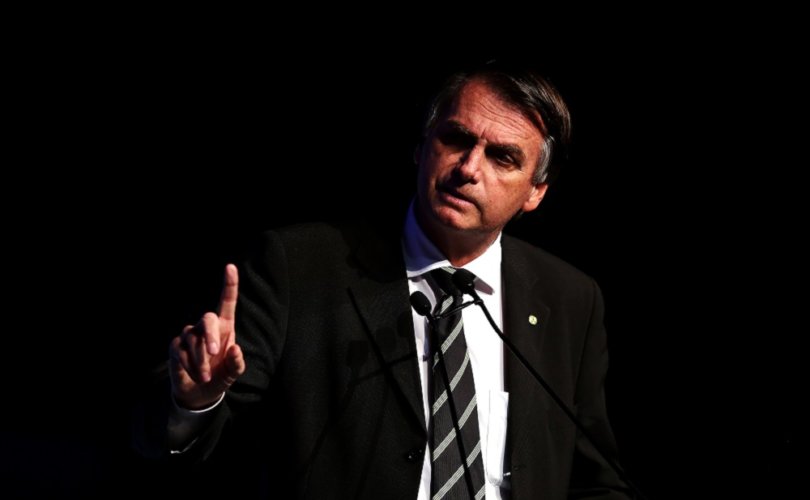 BRASILIA, September 10, 2019 (LifeSiteNews) — President Jair Bolsonaro of Brazil has announced that his administration is preparing legislation to prohibit the spreading of gender ideology in the South American republic’s public primary schools.

President Bolsonaro announced on Twitter that he instructed the Brazilian Ministry of Education to draft a bill to protect minors in school from the gender ideology sweeping much of the world. He tweeted on September 3 that Brazil’s attorney general had declared which section of government has competence to decide on the future of the controversial ideology in schools. “The Attorney General declared who is responsible for legislating on gender ideology, since it is a federal competence. I directed the Ministry of Education, with a view toward the full protection of children, to prepare a draft law that prohibits gender ideology in elementary schools,” he wrote on Twitter.

Bolsonaro assumed office on January 1 of this year and has thus accomplished one of his campaign promises. An October 2017 public opinion survey had revealed that nine out of ten Brazilians reject gender ideology in schools. The current president is riding a wave of populism and support from conservative Christians, even among the poorest, according to the Financial Times. Bolsonaro once declared, “I’m homophobic, with pride.”

In December 2018, shortly before taking office, Bolsonaro said he wants the army to assume control over some public schools, despite criticism from teacher unions. In the poorest areas of Brazil’s major metropolitan areas, gangs armed with military weapons have engaged in open firefights with police and military. Criminal gangs seek to control whole sectors of poverty-stricken neighborhoods, where they distribute narcotics and engage in violent extortion.

Teachers have complained about violent assaults by students while also complaining about poor pay. Bolsonaro tweeted in 2018 about his prospective presidency: “One of the goals to get Brazil out of the worst positions in international education rankings is to combat the Marxist rubbish that has spread in educational institutions.”

Bolsonaro has since been subjected to criticism by members of the media and LGBT campaigners, who accuse him of “homophobia” and even racism. Nonetheless, he recently stated that Brazil will never become a haven for LGBT advocates nor for sex tourism under his watch. LGBT activists are a force to be reckoned with in Brazil: reportedly this year, more than 3 million people turned out for a gay parade in São Paulo in June.

The Folha de S. Paulo ﻿newspaper noted in a report that Bolsonaro may have been referring to a case now before Brazil’s Supreme Court regarding a law in the state of Paraná, which would ban gender ideology in the public school system. According to the newspaper, the case was brought to the high court jointly by the leftist National Confederation of Education Workers and the National Association of LGBT Human Rights Jurists. The organizations claimed that only the federal government has the authority to regulate the issue.

Governor João Doria, a possible candidate for the 2022 presidential election, tweeted on September 3 that an “unacceptable mistake” had been made in distributing materials to 8th-grade students in the state’s public school that promote what he called “gender ideology.” Doria ordered that the material be removed immediately from the schools. An investigation is expected. According to the Huffington Post, Doria pulled materials destined for science courses that include sexually transmitted diseases, contraception, and discussions about “gender identity” and “sexual orientation.”

In a news conference, Doria insisted that his administration “does not do gender ideology” while reiterating that the offending materials will be removed. “It is not reasonable for children and adolescents to have this kind of subject in school. In the morning, I was informed about the existence of this text. I contacted Secretary Rossieli Soares, who was surprised by this issue.” Once Doria learned from Soares that the material was indeed found in schools, he ordered its removal.

Brazil’s Chamber of Deputies specifically excluded content on gender issues in Brazil’s National Education Plan. State and local governments followed the national government’s lead. While the terms “gender identity” and “sexual orientation” were included in Brazil’s national curriculum guidelines, the terms were removed from the text during President Michel Temer’s administration. Temer served as interim president (2016–18) following the impeachment and removal of former leftist president Dilma Rousseff, who had championed the LGBT cause.

Bolsonaro has sought to implement an education policy he called “Party-Free Education.” He and members of his cabinet have been critical of what they regard as ideological indoctrination of students at the primary, secondary, and university levels. As far back as 2014, while serving in the national legislature, Bolsonaro had pushed for the project.