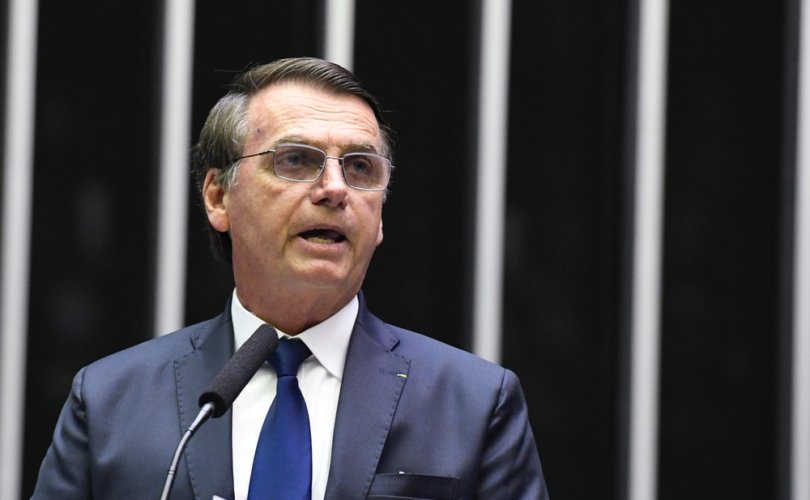 May 30, 2019 update: Videos of the ceremony when the Brazilian nation was consecrated to the Immaculate Heart of Mary did not show President Jair Bolsonaro actually approach the table where the document of consecration was signed by Bishop Fernando Areas Rifan and others. Bolsonaro’s office, in an official press release, stated that he had signed the document. It remains unclear when this happened. Emails from LifeSiteNews to the Foreign Ministry and Presidential Office of Brazil went unanswered.

BRASILIA, May 22, 2019 (LifeSiteNews) — On Tuesday, Brazil was consecrated to the Immaculate Heart of Mary in a ceremony that included President Jair Bolsonaro and Bishop Fernando Areas Rifan.

The consecration of Brazil, which has more Catholics than any other country, to the Virgin Mary was an initiative of national deputy Eros Biondini and Brazil’s Catholic Parliamentary Front to ask for divine protection and in reparation for sin.

“We are doing this for Brazil, for our love for our nation,” Biodini was reported as saying.

A statue of the Virgin Mary, which depicts her as she appeared to child visionaries in Fatima, Portugal, was at the ceremony and will remain in a place of honor in the presidential palace.

Signing the proclamation of national consecration were President Bolsonaro, cabinet minister Floriano Peixoto, and Biondini. The other signatories were Bishop Areas and Bishop emeritus João Evangelista Martins Terra of Brasilia, the nation’s capital

Participants at the ceremony included various high-level politicians as well as representatives of various Catholic movements. According to Biondini, “[t]his is a simple gesture of faith and love, which is of great important not only for Catholics, but for all of Brazil.”

During the ceremony, participants prayed the rosary and sang a Marian hymn, accompanied by a number of nuns. Sister Kelly Patrícia, one of the founders of the Hesed Institute, a Catholic community, sang at the ceremony. According to a statement from the presidential palace, she said, “When it comes to the heart of Mary, it means great things.”

Bishop Areas said that consecrating his country to the Immaculate Heart means that “Brazil recognizes the presence of God.” Pro-life advocates, among them a priest, displayed banners emblazoned with the motto “Brazil is alive: no abortion.”

Bishop Areas leads the Personal Apostolic Administration of St. Jean Marie Vianney, which was established by Pope St. John Paul II for traditionalist Catholic clergy and laity within the Diocese of Campos in Brazil. Devoted exclusively to celebrating the pre-1965 Roman rite of the Mass, it is the only personal apostolic administration in existence in the Catholic Church.

Government minister Peixoto thanked President Bolsonaro for his participation in the event. Peixoto said, “This space and all our public buildings are places in which the Christian faith is professed.” Peixoto asked for prayers to advance his work: “May God illuminate everyone so that we can achieve our goals of lifting up fellow citizens and bringing to our children, brothers and sisters, nieces and nephews and cousins, a better and more just condition for everyone.”

Much like Bolsonaro, Italy’s Deputy Premier Matteo Salvini dedicated his country to the Immaculate Heart of Mary. On May 18, at a rally attended by tens of thousands, the devotedly Catholic Salvini held up a rosary and kissed it. Looking up at a statue of the Virgin Mary atop the cathedral of Milan, he said, “I entrust Italy, my life, and your lives to the Immaculate Heart of Mary, who I’m sure will bring us to victory.”

Salvini was criticized for his fervent expression of faith. Mentions of Pope Francis were met by boos and grumbling from the crowd. Reportedly, the pope has refused to meet Salvini because of the latter’s policy regarding migrants seeking asylum in Italy.