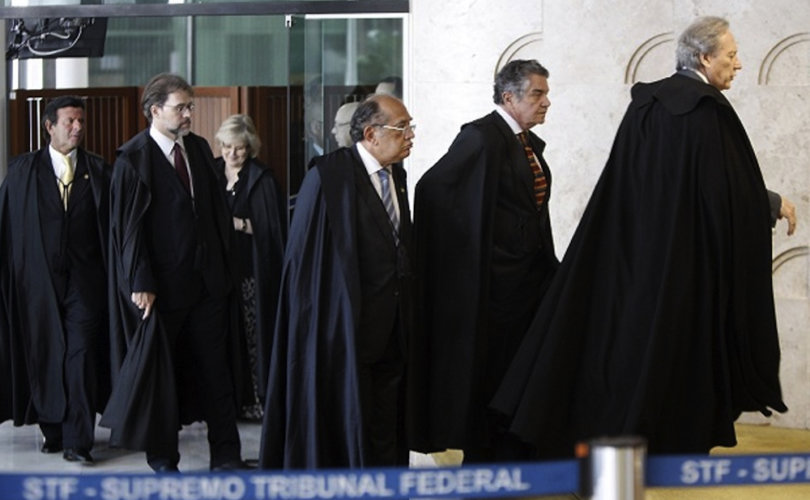 BELO HORIZONTE, Brazil, August 14, 2018 (LifeSiteNews) — The Supreme Federal Court of Brazil hosted a public debate on a case that could lead to abortion on demand being legalized in the country up to the third month of pregnancy.

Brazil currently allows killing of the unborn in the cases of rape, risks of death to the mother and, after a decision by the Supreme Court in 2012, foetal anencephaly.

The petition was made by the Socialism and Freedom Party (PSOL), which is widely supported by homosexual movements in Brazil, including the “LGBT Parade.” The PSOL is already well-known in the country for its pressure on Congress to force schools to show children short films about the supposed “advantages” of being an active bisexual.

PSOL also supported the 2017 exhibition “Queer Museum,” which was hosted by the bank Santander and used government-allocated public funds. It depicted “works of art” ranging from drawings of children as transvestites and acts of zoophilia to sexually explicit vocabulary written on (non-consecrated) communion wafers. The public exhibition, also supported by all major LGBT organizations throughout Brazil, had no age restrictions, allowing children to see content.

It is the same party that, having failed to pass a Congressional bill legalizing abortion in the Catholic country, where an overwhelming majority of the population (from 73 to 85 percent in recent polls) opposes abortion, filed the petition to the Supreme Court.

The final trial before the court’s 11 justices is expected to take place early next year. The National Conference of Brazilian Bishops (CNBB) will present oral arguments as an amicus curiae for the rejection of the petition. Should the petition be granted, however, public hospitals in Brazil will be forced to employ taxpayers’ money to offer abortion on demand until the third month of pregnancy.

The Court has ruled on abortion only once, when it granted a petition declaring that “the termination of a pregnancy does not constitute the crime of abortion typified in the Penal Code if the aborted foetus suffered from anencephaly” (a condition where the foetus lacks part of the brain). This ruling was made despite multiple cases of these babies living for many months, sometimes more than a year, after birth, and capable of experiencing pain and emotions.

Now, six years after the Court ruling that a certain physical deficiency renders a baby unworthy of human rights, its very membership inspires uncertainty. Three of the Court’s 11 justices are openly in favor of using judiciary bodies to legislate against the unborn. One of them, Justice Roberto Barroso, was nominated by Brazil’s Socialist ex-President Dilma Rousseff under heavy lobbying from feminist and LGBT advocacy groups. His previous decisions include granting a writ of habeas corpus to convicted clandestine abortionists, as well as an order forcing lower courts to put gender-confused men in women-only penitentiaries. Notably, Barroso once shouted at fellow Justice Gilmar Mendes during a trial for opposing abortion, saying: “You are a horrible person! A blend of evil and backwardness with pinches of psychopathy!”

Justice Mendes, Justice Alexandre de Moraes and Justice Ricardo Lewandowski are expected to vote to protect the unborn. Justice Lewandowski, one of the most senior members of the Court, is its strongest pro-life voice, having made one of the two votes against the Court’s 2012 decision condemning anencephalous foetuses. On that occasion, he read his dissenting opinion from the bench for almost two hours, claiming that the Court was about to “throw us back to the times of Ancient Rome, when children would be thrown off the Tarpeian Rock for being weak or handicapped.”

Two of the five Justices are considered swing votes on the issue. Justices Celso de Mello and Marco Aurélio will likely retire before the case is decided, making the upcoming October presidential election in Brazil even more decisive. Congressman Jair Bolsonaro, a longtime adversary of Brazil’s leftist parties, is the only presidential candidate who has vowed to appoint conservative Justices to fill those two vacancies. His election could be the last chance this long-suffered country, where Father Antonio Vieira first planted the seed of Catholicism, has of protecting her most vulnerable children from a state-sanctioned holocaust.