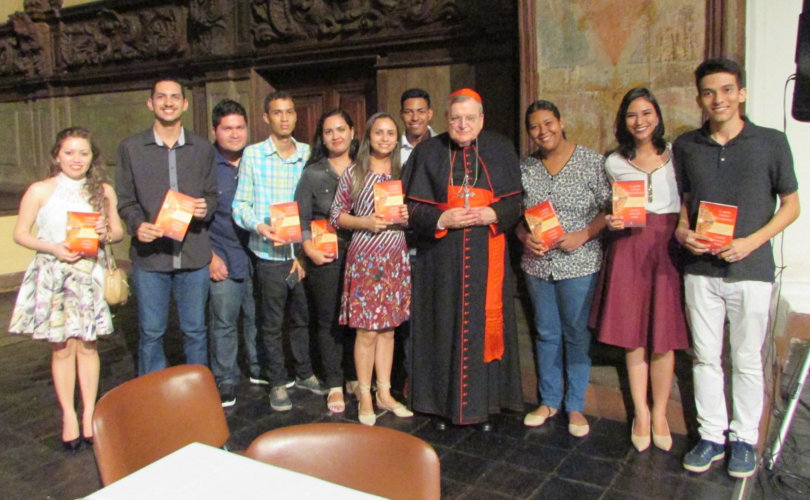 Cardinal Raymond Burke with young adults who traveled 10 hours to see him in Belem, Brazil,

Each of the venues in four major cities in Brazil was sold out, Catholic Action for Faith and Family’s Thomas McKenna told LifeSiteNews.

“In Sao Paulo, the registration of a venue with over 400 seats was sold out in less than a week once it opened,” he said.

McKenna and the book’s publisher estimate about 80 percent of those gathered to see the cardinal known for upholding Catholic orthodoxy and hear him speak were under age 40.

“It was impressive to see so many young professionals all dressed appropriately,” McKenna said. “Young men wearing suits and young ladies wearing dresses as they would wear to Sunday Mass once upon a time.”

Asked why so many young people came to see the cardinal, McKenna responded, “Cardinal Burke represents and professes the traditional values they adhere to.”

At each of the events where the cardinal appeared — book engagements, Mass, or a Eucharistic procession — the faithful showed up in droves. In addition to a majority being young people, there was also a healthy representation of seminarians, priests, and religious who came to see Cardinal Burke.

“It was inspiring for the public to be in the midst of so many clergy and seminarians, many of whom wore cassocks,” McKenna told LifeSiteNews.

“It is significant to see so many who grew up in the modern world and Church where traditions were presented as something of the past, outdated,” he continued. “And these young people are significantly attracted to them and seeking to learn more about them and want to put them in practice.”

The cardinal visited the cities of Belem, Brasilia, Rio de Janeiro and Sao Paulo to launch his book Divine Love Made Flesh: The Holy Eucharist as the Sacrament of Charity.

Cardinal Burke’s book was originally published and launched in English, Italian, Polish, French and Croatian, and it’s now in Portuguese.

The book’s Portuguese-edition publisher, Ecclesia, invited the cardinal to visit Brazil to launch the book, a trip that spanned 10 days in the country with the largest population of Catholics in the world. Approximately 70 percent of Brazil’s 208 million residents profess the Roman Catholic faith.

Packed crowds into the hundreds, “sustained applause and manifested great enthusiasm for him” met Cardinal Burke everywhere, according to McKenna. Everywhere he went it was standing room only, people spilling out the doors, and people waiting as long as two hours after events to greet him, get an autograph or photo, and to receive his blessing.

For example, McKenna told LifeSiteNews, “The evening in Sao Paulo, a crowd of almost 500 people attending — with more than 70 priests, seminarians and religious — enthusiastically greeted him with lengthy ovations.”

And in Rio de Janeiro, McKenna recounted, “A palpable joy and excitement filled the room as the cardinal spoke.”

McKenna said it was moving that in each of the cities where the book was launched, Rosary Warriors, members of Operation Storm Heaven, the Rosary campaign led by Cardinal Burke, came forward to introduce themselves and tell him how happy they were to participate.

Some people traveled more than 24 hours to attend his Brazil appearances, others as much as 10 hours.

McKenna believes the level of esteem shown Cardinal Burke in his Brazil trip likely stems from his publicly standing for preserving Church teaching.

McKenna said Brazilians told him that before the dubia, conservative Catholics there knew about Cardinal Burke. But due to all of the “confusion” regarding Amoris Laetitia, and the subsequent publication of the dubia, Cardinal Burke became much better known.

“That is why there was such an interest with his book on the Holy Eucharist and an interest to hear him speak,” he said.

“The traditional aspects of the Church that Cardinal Burke promotes and professes resonates with a significant number of faithful who admire him for this,” McKenna said. “People today are hungry for traditional Catholic teachings that are clear and represent the Truth they are seeking.”