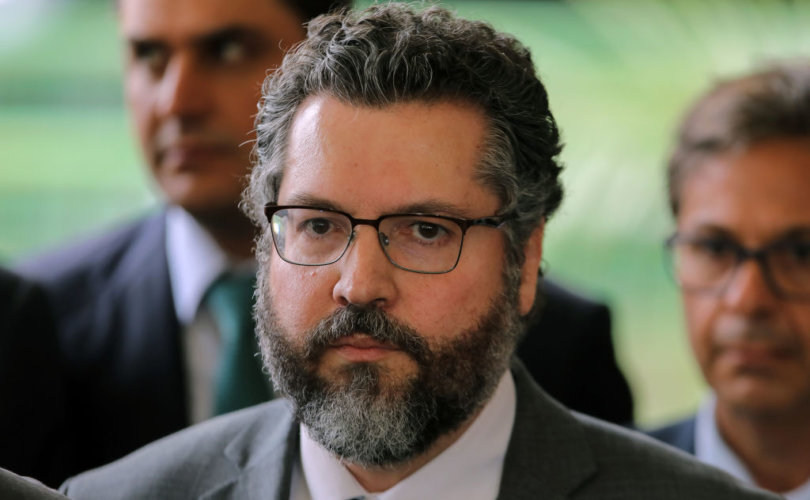 Brazilian diplomat Ernesto Araujo, who was appointed by Brazilian President-elect Jair Bolsonaro as Foreign Minister, is pictured at the headquarters of the transitional government in Brasilia, on November 14, 2018.SERGIO LIMA/AFP/Getty Images

BRAZIL, November 30, 2018 (LifeSiteNews) – Brazil’s new top diplomat is provoking strong reaction among leftists due to a number of statements that have recently surfaced showing him bucking against some of their most cherished beliefs.

Ernesto Frago Araújo has called climate change an “ideology” contrived by “cultural Marxists” in order to stifle western economies. He has also, at the same time, called out the left for attempting to “criminalize” the “family,” “heterosexual intercourse,” the statement that “a person is born a man or a woman,” and “faith in God.”

The appointment of Araújo, who will take office as Brazil’s foreign minister in January, is “likely to send a chill through the global climate movement,” according to a report in The Guardian.

Araújo says his goal is to “‘help Brazil and the world liberate themselves from globalist ideology,’ which he sees as anti-Christian,” continues the report.

Araújo said the environmental cause, which originally was intended to be about the “preservation of nature and the responsible use of its resources,” was hijacked by the left as a way to control countries and peoples.

“This dogma has served to justify an increase in the regulatory power of states over the economy and power of international institutions over national states and their populations, as well as to stifle economic growth in democratic capitalist countries and foster China's growth. (An important part of the globalist project is to transfer economic power from the West to the Chinese regime, a key part of Trump's project is to disrupt that process, which is already happening.) Climate is basically a globalist tactic of instilling fear for more power,” wrote Araújo, a prolific blogger, in a post last month.

In another post Araújo said Brazil's Workers Party promotes totalitarianism as it “Criminalizes everything that is good, spontaneous, natural and pure; Criminalizing the family on charges of patriarchal violence; Criminalizing private property; Criminalising sex and reproduction, saying that all heterosexual intercourse is rape and every baby is a risk to the planet as it will increase carbon emissions.”

The Guardian characterized the above quotes as “incendiary rhetoric.” It interviewed for its report a “climate negotiation expert” who criticized Araújo.

“Brazil has played a very significant role for the Paris agreement. It would be really bad for the country’s image if he brings with him his ideology,” said Carlos Rittl, the executive secretary of the Brazilian Climate Observatory.

He said climate was the one area where Brazil could proudly boast to be a global leader, and urged the new foreign minister and president not to isolate the country in this field.

Pro-life and pro-family leaders welcomed the news of the October election of Jair Bolsonaro, calling it a “new day for Brazil.”

“Jair Bolsonaro has been elected president, putting an end to a generation of leftist rule.  Under Bolsonaro, Brazil could go from being a refuge for Latin American marxists and their corrupt globalist allies to becoming an invaluable ally to President Trump’s vision of a region where governments are motivated by their sovereign interests.  Most importantly, Brazil will go from being a promoter of the Culture of Death, to a defender of the Culture of Life,” wrote Guilherme Ferreira Araújo along with Gualberto Garcia Jones in an Oct. 28 piece on LifeSiteNews.

The authors say that many people consider some of Bolsonaro’s public statements to be controversial, but this is largely due to his “boldness and directness” in attacking the communist party.

“[T]his is precisely why Bolsonaro started to become so popular. He was one of the only ones willing  to publicly attack what the communists from the Workers Party (PT) were doing: the destruction of the family through gender ideology and early sexualization; the defense and even the promotion of organized crime as a stylish way of life; the promotion of abortion; the deep corruption scandals – perpetrated at a scale never seen before by Lula and his gang – that battered Brazil; the endemic violence that has affected the country (claiming at least 60,000 murders per year).  In all of these areas, Bolsonaro has not held back and has offered bold conservative solutions which have resonated with the people of Brazil,” they write.

According to the Daily Mail, Bolsonaro’s election underscores “Brazil's sharp turn to the right and the reversal of nearly a decade and a half of diplomacy under leftist Workers Party governments that focused on alliances with South American allies and ideological partners – including Cuba.”