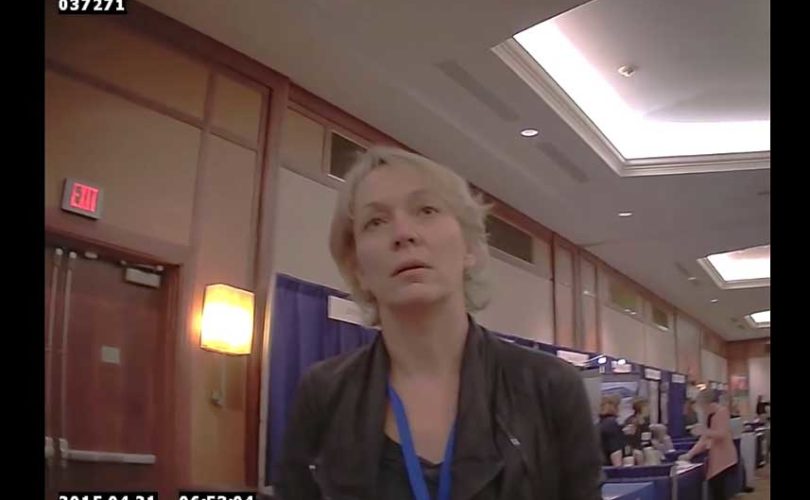 Video frame from one of the videos

October 22, 2015 (LifeSiteNews) – The website GotNews.com claims it has obtained and released “all” the remaining undercover videos of Planned Parenthood officials shot by the Center for Medical Progress (CMP), including videos that were blocked from being released to the public by a court order.

Eleven previously unseen videos have been uploaded to YouTube.

“This material was turned over by Congressional whistleblowers not subject to the court order,” Auernheimer said.

The videos, which range in length from just over one minute to more than 36 minutes, contain more intrepid footage of abortion industry officials.

In all, the footage totals around four hours. CMP has said its investigators had “painstakingly” gathered “hundreds of hours of undercover footage.”

Johnson added that both he and his website have been served with a letter from the law firm representing the National Abortion Federation (NAF) – Morrison & Foerster – warning that, if they continue to make the footage available, they will be “subject to severe legal sanctions.”

In July, the NAF has won a temporary restraining order against the Center for Medical Progress, enjoining it from releasing footage of NAF events and officials to the public.

“I will not countenance a game of hide the ball with respect to these documents, video footage and communications, that interferes directly with these proceedings,” he wrote.

Congressman Chaffetz, R-UT, confirmed that he had received “all unedited video footage” from CMP earlier this week.

Judge Orrick also ordered CMP to give NAF a copy of everything it gave to Congress.

Since Judge Orrick's restraining order applies to CMP and its members, Johnson says he and his website are not bound by it and will continue to make the footage available to the public.

“The law firm wants GotNews.com to turn over all texts, emails with Daleiden. This is easy. There aren’t any,” he wrote.

“GotNews.com will contest any unconstitutional prior restraint of speech all the way to the highest courts in the land,” he added.

See all the videos here.