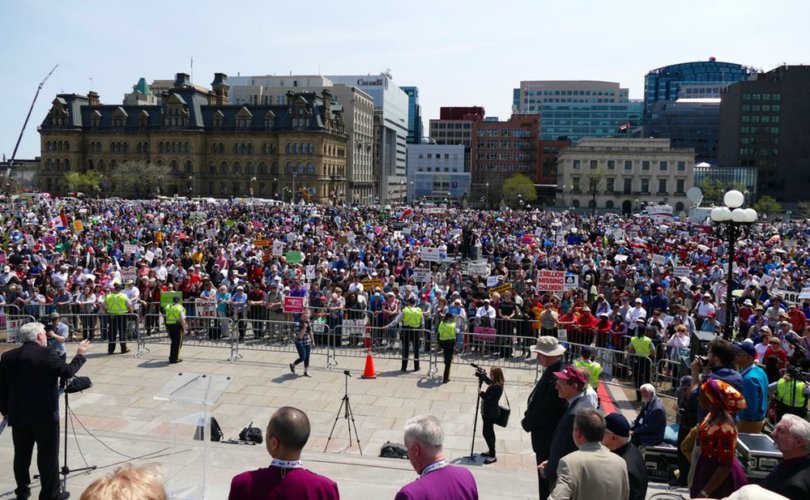 OTTAWA, May 12, 2016 (LifeSiteNews) — An estimated 22,000 people gathered on Parliament Hill for the 19th annual March for Life were urged to continue their pro-life witness by getting involved in grassroots political action and engaging in the culture with “clarity and charity.”

Organized by the national pro-life political lobbying group Campaign Life Coalition, the March for Life is Canada’s largest annual pro-life event. The date of the event marks the legalization of abortion on May 14, 1969, under Pierre Trudeau’s Liberal government.

A Supreme Court decision in 1988 struck down that law, leaving Canada with abortion virtually on demand.

Now, Trudeau’s son Justin, who came to power six months ago with a Liberal majority, is moving to push abortion overseas and legalize euthanasia at home.

Speakers at the March for Life implored pro-life advocates to step up lobbying efforts to stop the Liberals’ anti-life juggernaut.

Watch highlights of the March for Life:

“Only a few days ago, I got the heartbreaking news that Canada will now be funding abortion in developing countries,” noted Obianuju Ekeocha, founder of Culture of Life Africa and keynote speaker at the Rose Dinner.

“I beg you to not use the blood of the innocent to pave the path to development,” she said.

“The truth is that laws come and go, but universal truths remain, and the universal truth that we are all here to declare today is that life begins at conception, without exception,” the Nigeria-born Ekeocha told the crowd.

“My little voice, I join it to yours: End the killing.”

“Sadly we see the the way in which the dark cloud of euthanasia and assisted suicide is growing darker and darker,” Collins said.

He urged people to contact both federal and provincial politicians to express, with “clarity and charity,” their utter opposition to the euthanasia regime.

Collins also asked people to join the Coalition for Healthcare and Conscience, which will “give you ways in acting and moving forward.”

“We have to have good news, reason and understanding, as we reach out to people who do not have faith,” he said, adding that prayer in itself is action.

“We pray for those who are suffering who are tempted to move in the direction of abortion or euthanasia.”

Alex Schadenberg, executive director of the Euthanasia Prevention Coalition, also urged people to “write your MPs and Senators, and say to them, stop the killing.”

“Right now in Canada we’re facing a precipice,” he said, as the Liberal government races to pass euthanasia legislation by the June 6 deadline, after which the Supreme Court ruling striking down the law on assisted suicide and euthanasia takes effect.

But the Liberals’ Bill C-14 “will not protect anyone, it’s a disaster,” Schadenberg said. He urged people to attend the anti-euthanasia rally on Parliament Hill June 1.

“Life is sacred because God created it,” he said, adding that, “When we end life prematurely … we miss out on God’s blessing.”

Other MPs also exhorted the crowd to back them up on on pro-life issues.

“You need to write the government,” BC Conservative MP Bob Zimmer told the crowd. “Some of us are already pro-life, but we have a lot to do.”

“You have to fight for this, you have to force politicians” to live up to the principles of good governance, echoed Alberta Tory MP Tom Kmiec.

“You are often our voice and always our encouragement,” noted Ontario MP Bev Shipley. “Please continue to grow and expand.”

Ontario Conservative MP Harold Albrecht told the crowd that the inscription on the Peace Tower reads: “Where there is no vision the people perish,” adding: “My vision for Canada is that every human life from conception to natural death is cherished and valued.”

But it will be virtually impossible to pass pro-life legislation “unless we get grassroots involvement at the political level, encouraging pro-life people to run for office,” Albrecht told EWTN in a later interview.

Not only must pro-life Canadians get politically involved, but “we need the church to be much more active,” Albrecht told EWTN’s Jim and Joy Pinto. “This is not a partisan issue.”

The number of pro-life MPs in the House of Commons is down to about “three dozen out of 338,” he said, adding, “But small doesn’t always mean weak.”

He noted that there are some Liberal MPs who are pro-life, but “are restricted at this time, because their leader has been clear they cannot speak on pro-life.”

“There’s a cost involved,” to being pro-life, he noted.  “I get negative tweets all the time for bringing my faith to work.”

But, added Albrecht, “If I don’t bring my faith to work, my life lacks integrity.”

“We have to make sure when we go home we do those extraordinary things.”

“We have an estimated 20,000 in this crowd,” noted Christina Alaimo, CLC Youth Coordinator. “I ask you and I beg you to use your power to protect life.”

“Please, when you go back home, lobby your MPs, park yourself at their office and let your voice be heard,” she said, “And only then will we end the killing in Canada.”

The march following the rally took an unexpected turn when Ottawa police decided to shorten the route because a group of about 100 pro-abortion activists blocked the road.

MPs who spoke at the March for Life:

Senators who spoke at the March:

Religious leaders at the March:

Bishop of the Slovak Byzantine Catholics of Canada John Pazak

Bishop of the Anglican Network of Canada George Masters