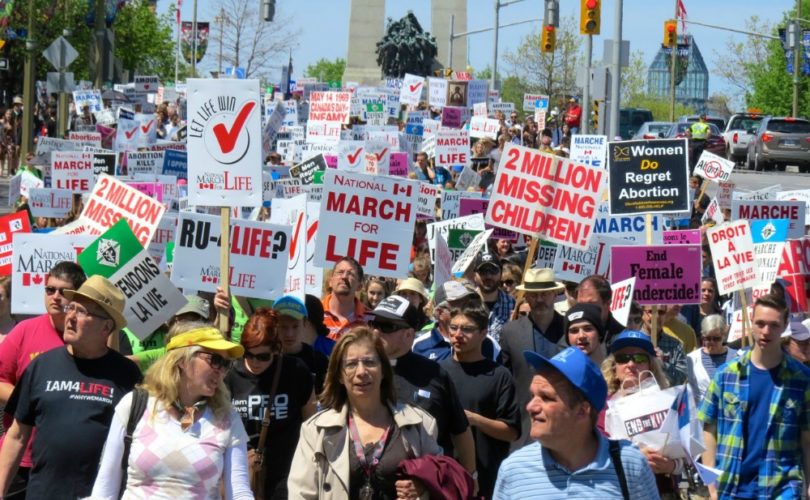 May 14, 2015 (LifeSiteNews) – Forty-six years to the day after Canada legalized the killing of children in the womb, nearly 25,000 people marched on Parliament Hill in Ottawa with the message to Canadians, and particularly parliamentarians, to “Let life win!”

Organized by Canada’s national pro-life lobby group Campaign Life Coalition, the 18th annual March for Life took place under sunny skies, with the only discordant note a noisy protest by a half-dozen topless women from the feminist group Femen, who were quickly removed by police.

Since then, an estimated four million unborn children have been killed by abortion, or 100,000 abortions annually.

In 1988, the Supreme Court struck down the country’s abortion law, leaving children in the womb with no legal protection or recognition in Canada.

This year’s March for Life highlights another Supreme Court decision: the February 6, 2015 ruling which gave Canada’s MPs a year to draft legislation on assisted suicide and euthanasia. As Toronto’s Cardinal Thomas Collins told the crowd, this is another manifestation of “the culture of death.”

The March for Life was dedicated this year to the country’s two pro-life prisoners of conscience, Linda Gibbons and Mary Wagner, both currently in jail in Vanier, Ontario, for counseling women against aborting their babies.

Gibbons has a court appearance tomorrow, May 15. The Crown is expected to drop charges and release her. Wagner, who will complete her ten-month sentence in early August, sent a letter thanking organizers, read out to the crowd, in which she emphasized: “It is not about getting arrested or not getting arrested, it is not about us but about that poor mother and her utterly helpless child about to be killed, who are owed all the love and protection their neighbours can give them.”

The full text of Mary’s letter is available here.

Eric Metaxas, keynote speaker at the event’s Rose Dinner, and biographer of Dietrich Bonhoeffer, quoted the German pastor, who was executed by the Nazis 70 years ago for resisting their evil regime: “Silence in the face of evil is itself evil.”

Cardinal Collins told the crowd that the commandment “Thou shalt not kill” is “simple, profound,” and urged “reverence for life for every person from conception to natural death.”

Other Catholic bishops attending the March for Life included bishops Terrence Prendergast, Fred Colli, Ronald Fabbro, Christian Riesbeck, Marcel Damphousse and Christian Lépine, who told the crowd: “The greatest measure of a civilization is the place it gives to the smallest.”

More than 30 parliamentarians, both MPs and Senators, also spoke, including retired Liberal MP Pat O’Brien, who told the crowds that from his former office in Parliament he could see rallies throughout the year, and that the March for Life was by far the largest. He said MPs need courage because they are under “enormous pressure … not to speak out” on controversial issues like abortion and euthanasia.

CLC’s Jeff Gunnarson said the March’s theme “Let Life Win” is intended to acknowledge “the fact that hearts and minds must change before the laws will change. We have to have a groundswell of support that says, we need to have this abortion stopped, then you have the courage of the MPs to change.”

“This is more a cultural event than a political event,” he told LifeSiteNews, “this is really a manifestation of let life win. The witness we give here, and the fact that it’s on Parliament Hill, will get people engaged in the culture with the pro-life message, at their workplace, community, church, one by one people start to turn, all the while the political arm is doing its thing, getting candidates nominated.”

Gunnarson said it’s encouraging that the March for Life grows every year, with more priests and bishops attending, who go back to their parishes and dioceses reinvigorated and ready to engage the culture on behalf of life.

1
Canadian doctor sounds alarm over 13 ‘sudden’ deaths among physicians since COVID jab rollout
2
The jabbed aren’t just unprotected against COVID, they’re also suffering the most
3
Cdl. Burke warns of ‘advancing apostasy’ in the Church during Latin Mass homily
4
After raid heard ’round the world, the choice is between Constitutionalism and de facto Communism
5
4-year-old girl announces her ‘gender transition’ at ‘pride’ parade
Subscribe to Daily Headlines »