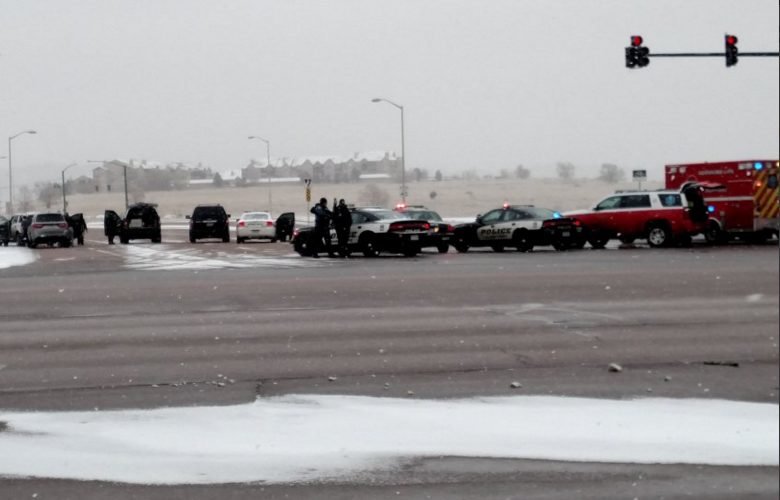 Police respond Friday afternoon after the shooting at a Planned Parenthood clinic in Colorado.

Update at 4:47 EST: In a second press conference moments again Lt. Catherine Buckley said that police are curently inside the Planned Parenthood facility exchanging gunfire with the shooter or shooters.

Update at 3:35 EST: New reports indicate that, in fact, the shooter is not contained. At a news conference Lt. Catherine Buckley said that the shooter is not in custody, that it is unclear if there is more than one shooter, and that the initial call to police came from the Planned Parenthood. Gazette reporter Stephen Hobbs is tweeting in real time from the press conference.

Update 3:12 EST: The Gazette now reports that the shooter is “contained.” They also report that at least three officers have been injured, as well as multiple others. No word on how many, or how serious the injuries are. There is also conflicting information about whether the shooting too place at, or simply nearby the Planned Parenthood facility. Some reports indicate that the shooting began next door, and that the shooter was targeting passing cars, and may have taken shelter in the Planned Parenthood.

COLORADO SPRINGS, CO, November 27, 2015 (LifeSiteNews) – According to local news stations, police are responding to reports of an “active shooter” at a Colorado Planned Parenthood – although one report says that a patient was shot at an eye care clinic located next door.

The Gazette is now reporting that one patient was wounded at “Elite Vision,” which is located next door to Planned Parenthood, at 3470 Centennial Blvd.

At the moment, however, police are reportedly facing the entrance of the Planned Parenthood facility, with their guns drawn.

The Gazette also reports that according to police scanner info two officers are down, one shot near a dumpster, and another already removed from the scene to hospital. Another two people are also reportedly injured.

A local woman told The Gazette, that she heard 10-20 gunshots in the space of a few minutes, and that she saw two officers outside the nearby Chase Bank. She saw one of the officers fall to the ground, and the other officer get down and start giving aid.

Media have been warned to stay away from the area, due to the fact that the area is not secure.

CSPD PIO responding to call if active shooter in Centennial Bl. The area is NOT secure. Media do not stage in area!

There is no information available about the identity or motivation of the alleged shooter, who reportedly was wearing a long jacket and a “hunting style” hat.