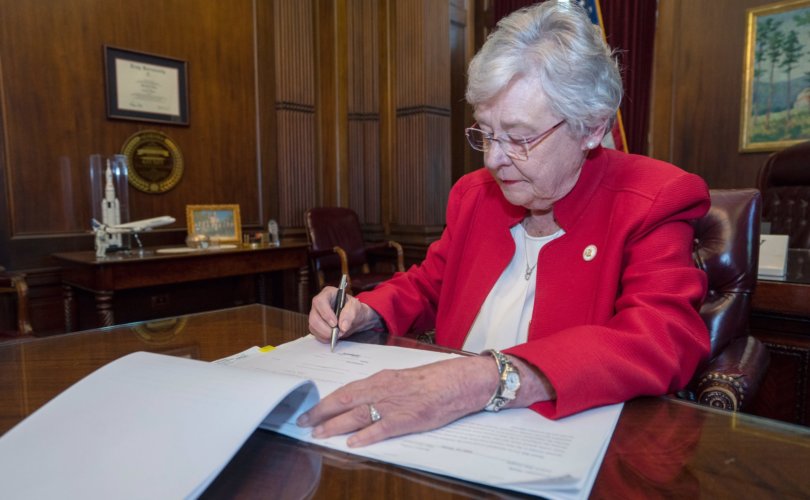 The law, the Alabama Human Life Protection Act, makes it a felony for doctors to commit abortions. Abortions are only allowed to “avert (a mother’s) death or serious risk of substantial physical impairment of a major bodily function.” The law makes committing an abortion a Class A felony – punishable by up to 99 years in prison – and attempting to commit an abortion a Class C felony.

“Today, I signed into law the Alabama Human Life Protection Act, a bill that was approved by overwhelming majorities in both chambers of the Legislature,” Gov. Ivey, a Republican, said. “To the bill’s many supporters, this legislation stands as a powerful testament to Alabamians’ deeply held belief that every life is precious and that every life is a sacred gift from God.”

“To all Alabamians, I assure you that we will continue to follow the rule of law,” she continued.

Today, I signed into law the Alabama Human Life Protection Act. To the bill’s many supporters, this legislation stands as a powerful testament to Alabamians’ deeply held belief that every life is precious & that every life is a sacred gift from God. https://t.co/DwKJyAjSs8 pic.twitter.com/PIUQip6nmw

Ivey noted, “In all meaningful respects, this bill closely resembles an abortion ban that has been a part of Alabama law for well over 100 years. As today’s bill itself recognizes, that [long standing] abortion law has been rendered ‘unenforceable as a result of the U.S. Supreme Court decision in Roe v. Wade.’”

“At least for the short term, this bill may similarly be unenforceable,” the governor acknowledged, but noted it may be the law that results in the overturning of Roe v. Wade, which imposed abortion on demand across the country.

“As citizens of this great country, we must always respect the authority of the U.S. Supreme Court even when we disagree with their decisions,” she said. “Many Americans, myself included, disagreed when Roe v. Wade was handed down in 1973. The sponsors of this bill believe that it is time, once again, for the U.S. Supreme Court to revisit this important matter, and they believe this act may bring about the best opportunity for this to occur.”

The state senate passed the Act last night 25-6, rejecting attempts to add exceptions for babies conceived in rape and incest.

“We are so thankful to have a governor who protects Life at every level and is willing to fight for the lives of preborn children to the very end, no matter how hard that fight may be,” Father Terry Gensemer, the Director of CEC for Life and an Alabama resident, told LifeSiteNews.

“Alabama is now leading the nation with the most pro-life bill in history: an abortion ban from conception with no exceptions for rape and incest,” the pro-life group noted on its website. “That means every child – not just those conceived in perfect circumstances – is protected by law in our state.”

“This law also establishes criminal penalties for those performing abortions. This means we do not consider abortionists to be fine, upstanding citizens in Alabama,” CEC for Life continued. “We recognize them as criminals who are not welcome here. Their shoddy businesses are not welcome either. CEC For Life will continue to pray for their conversion, but we also celebrate a law that finally exposes the abortion industry for the criminal operation it has always been.”

This is a developing story. LifeSiteNews will continue to post updates as they become available.