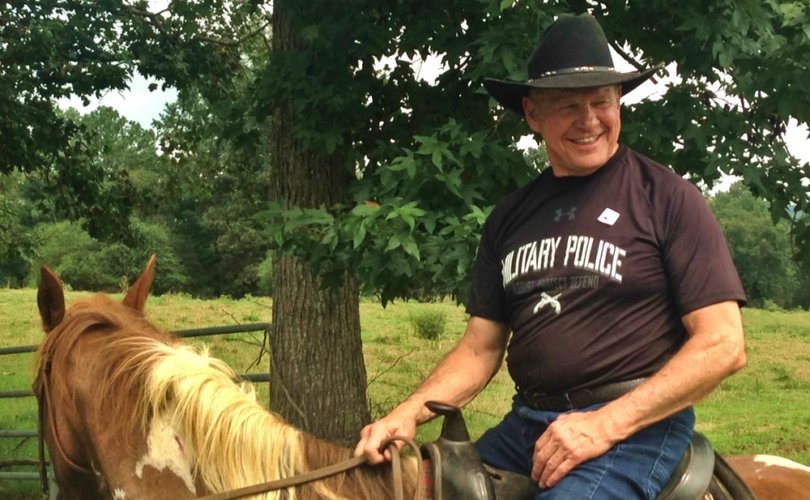 At 9:18 p.m. EST, the Senate Leadership Fund, a GOP superpac, conceded the race. The New York Times announced that Moore won at 9:27 p.m. EST, with 45 percent of precincts reporting.

Moore is the former Chief Justice of the Alabama Supreme Court. He is known for his staunchly pro-life, pro-marriage views and support of Christianity in the public square.

Republicans Moore and Strange were competing for the senate seat of former Sen. Jeff Sessions, appointed by President Trump to be the U.S. Attorney General.

Both are strongly pro-life and conservative, but Moore was seen as an anti-establishment alternative to Strange and his ally, Majority Leader Sen. Mitch McConnell. The race was dubbed a “Trump supporter civil war” because Moore was seen as the more Trump-like candidate, but Trump endorsed Strange. His former adviser, Sebastian Gorka, said the president did so “with great pressure from Mitch McConnell.”

In the first stage of the primary, Moore won 38 percent of the vote and Strange won nearly 33 percent. That forced them to today’s runoff.

Moore has been removed as Alabama Supreme Court Chief Justice twice, first for refusing to remove a Ten Commandments monument in 2003.

In 2012, Moore was re-elected as Chief Justice and then suspended in 2016 for refusing to legitimize same-sex “marriage.”

Moore is outspoken about the need for religion and morality in public life. He founded the Foundation for Moral Law, which “exists to restore the knowledge of God in law and government and to acknowledge and defend the truth that man is endowed with rights, not by our fellow man, but by God.” Moore’s wife Kayla is the Foundation’s current President.

“Crime, corruption, immorality, abortion, sodomy, sexual perversion sweep our land,” Moore said at a September 21 debate with Strange. “When we become one nation under God again, when liberty and justice for all reigns across our land, we will be truly good again.”

During the same remarks, he blasted political correctness and “transgender troops in our bathrooms.”

The election for Sessions’ seat was originally going to take place in 2018 along with the regular midterm election, but Bentley’s replacement, Gov. Kay Ivey, moved it to December 2017.

“A vote for Roy Moore is a vote for Donald J. Trump,” Bannon said.

National Right to Life and the NRA both endorsed Strange.

Gorka said Strange is part of the Washington establishment “swamp” that Trump promised to drain.

“Judge Roy Moore is an embodiment of what we chose on November the 8th last year when we elected Trump into office,” Gorka told the BBC. “Mitch McConnell has spent more than 10 million dollars on the candidate that represents the establishment.”

Despite his connections to the Republican establishment, Strange is also a social conservative. When Republicans were still trying to replace Obamacare, he introduced an amendment that would have stopped Obamacare tax subsidies from going to health insurance plans that cover elective abortion.

He has a 100 percent voting record from National Right to Life in the 115th Congress and is the co-chair of the Senate Values Action Team. Unlike most Republican Congressmen, he publicly supported Trump's ban on gender-confused individuals serving in the military.

When the Supreme Court imposed same-sex “marriage” on the country through Obergefell v. Hodges, Strange said he disagreed with the ruling but would respect it as law and focus on religious liberty efforts.