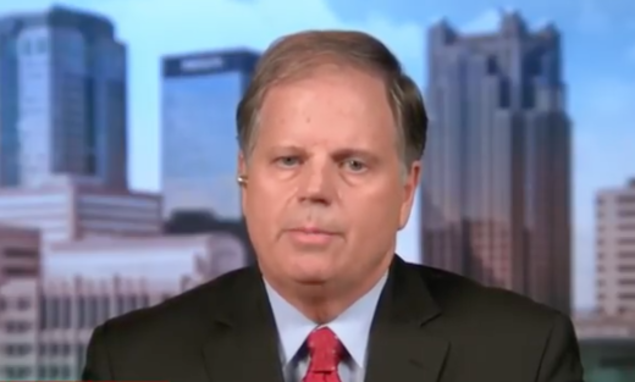 Fox News called the race for Jones at 10:24 p.m. EST. So did the Associated Press.

Moore has yet to concede.

The race between Jones and Moore became increasingly heated this fall, especially as politicians and Hollywood figures were accused of (and in some cases admitted to) being sexually predatory and a series of congressional and state legislators resigned because of sexual misconduct.

Meanwhile, Democrats strived to continue their “resistance” to President Trump. As they fought Republican efforts in Congress, a pro-abortion Democrat won Virginia’s gubernatorial election and Republicans lost a number of state legislature seats in the commonwealth. Notably, a man who presents himself as a woman beat 25-year incumbent Del. Bob Marshall, a pro-life, pro-family champion.

Moore faces allegations of sexual misconduct. A woman named Leigh Corfman says that when she was 14 and Moore was a 32-year-old district attorney, he sexually assaulted her. Other women say he pursued relationships when they were in their late teens and he was much older.

Another, Beverly Young Nelson, says Moore assaulted her when she was a 16-year-old waitress. Nelson said Moore signed her yearbook when he wasn’t a student and used this as proof of their relationship. She then admitted to forging part of the yearbook inscription, but maintains that Moore “did sign it.”

Jones, a hard Democratic leftist, found himself out of step with most Alabama voters but at an advantage due to the accusations against Moore. This gave Democrats a chance to win a U.S. Senate seat that hadn’t been theirs, Fox News pointed out on Tuesday, for more than a quarter of a century.

Moore “is a leader in the ‘Personhood movement,’ which seeks to outlaw a woman’s choice to have a legal and safe abortion,” the Center for American Progress warned in its December 11 “Progress Report” email. The liberal group criticized Moore over his opposition to homosexuality, government-run pre-schools, and same-sex “marriage,” along with the “sexual misconduct allegations” he faces.

Some pro-lifers stuck by Moore, insisting that the attacks were a smear campaign. Others and many “establishment” Republicans urged him to drop out of the race. The left, especially abortion advocates, said these accusations are true and mean Moore is a hypocrite.

The Republican National Committee withdrew, and then reinstated, its support of Moore.

On December 5, Sen. Jeff Flake, an anti-Trump Republican from Arizona who is not seeking re-election, tweeted a photo of a $100 check he wrote to the Jones campaign.

President Trump urged Alabamians to “VOTE ROY MOORE!” today in a tweet that labeled Jones a “Pelosi/Schumer Puppet” and made note of his pro-abortion views.

The people of Alabama will do the right thing. Doug Jones is Pro-Abortion, weak on Crime, Military and Illegal Immigration, Bad for Gun Owners and Veterans and against the WALL. Jones is a Pelosi/Schumer Puppet. Roy Moore will always vote with us. VOTE ROY MOORE!

Jones supports forcing religious employers to violate their consciences to participate in the provision of artificial contraception, something he advertised on his campaign website. He was endorsed by the Human Rights Campaign, but his campaign was bereft of any major focus on same-sex “marriage” or the LGBT agenda.

Jones supports abortion on demand and a host of left-wing causes.

Jones faced criticism after the Doug Jones for Senate Committee released an ad many called “racist.”

The ad showed an African-American man and asked “think if a black man went after high school girls anyone would try to make him a senator?”

At The Root, Michael Harriot commented:

Someone, probably a white man, thought that the image would resonate with black people and motivate them to get out the vote. It’s as if black people were considering voting for the child molester until some brilliant strategist posited, “What if he were black, though?” The flyer is reductive in its oversimplification of the black mind as only caring about black issues. While it might not be racist, it is certainly racist adjacent.

Moore beat incumbent Sen. Luther Strange in the primary by a landslide in September 2017. Strange had been appointed to take former Sen. Jeff Sessions’ seat after Trump appointed Sessions to be the U.S. Attorney General.

Trump initially supported Strange, but then endorsed Moore after he won the primary.

Moore is the former Chief Justice of the Alabama Supreme Court. He is known for his staunchly pro-life, pro-marriage views and support of Christianity in the public square.

Moore told LifeSiteNews in October that there’s a “wide discrepancy” between his and Jones’ views on abortion.

Moore rode to his polling station on horseback today, which he also did when voting for himself against Strange.

If Moore had won, he would have faced a Senate Ethics investigation, according to Sen. Mitch McConnell, R-KY, the Senate Majority Leader.

On his show Tuesday night, Tucker Carlson wondered if the race would have gone differently had Jones campaigned as pro-life rather than pro-abortion.