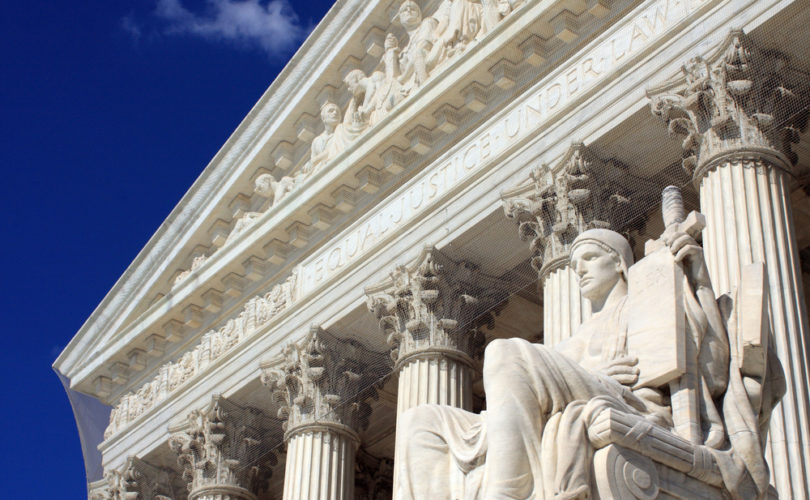 MONTGOMERY, Alabama, October 19, 2018 (LifeSiteNews) – Today, the Alabama Supreme Court unanimously ruled in the case of Jessie Phillips v. State of Alabama that “the value of the life of an unborn child is no less than the value of the lives of other persons.”  In a concurring opinion, Justice Parker boldly called on the Supreme Court to overturn Roe v. Wade.

“I urge the Supreme Court of the United States to reconsider the Roe exception and to overrule this constitutional aberration,” wrote the Alabama Supreme Court judge, and recommended that the Court “return the power to the states to fully protect the most vulnerable among us.”

The case came before the Alabama Supreme Court when Jessie Phillips, a man convicted of murdering his wife and their pre-born child, appealed his conviction arguing that he shouldn’t receive the death penalty because his 6-8 week pre-born child should not be considered a person under Alabama law.

The Alabama legislature expressly enacted the “Brody Act” 12 years ago to protect pre-born babies.  Under the Brody Act, the definition of a “person” includes “an unborn child in utero at any stage of development, regardless of viability.”  The Brody Act is consistent with numerous other sections of Alabama law which recognize the equal status of the child in the womb. In his powerful concurring opinion, Justice Parker noted that the old law was changed “with the expressed intent of addressing just the sort of double-murder of which Phillips was convicted.”

The national significance of this case cannot be understated, since the question of personhood has been the lynchpin to the so-called right to abortion, ever since Justice Blackmun erroneously wrote in Roe v. Wade that children in the womb are not persons and therefore not entitled to any of the fundamental constitutional protections.

Responding directly to Roe’s flawed ruling, the Alabama Supreme Court unanimously ruled that “unborn children are persons entitled to the full and equal protection of the law.”

Justice Parker, one of the court’s most vocal pro-lifers, wrote a separate concurring opinion specifically to emphasize how broadly and consistently the law and judicial decisions in Alabama and around the Country protect the rights of unborn children, and to contrast that with “the continued legal anomaly and logical fallacy that is Roe v. Wade.”

In his pleadings, Mr. Phillips had argued that since his child was not viable when the murders were committed, he was guilty of only killing one person and therefore not eligible for the death penalty.  Justice Parker categorically rejected this argument, stating that “Phillips's crimes were capital not because he killed a pregnant woman but because he killed two persons.” Justice Parker added that, to the extent Phillips was arguing that his unborn child was less of a person because the baby was young (6-8 weeks), Justice Parker dismissed that argument as “entirely unconvincing in light of the natural law, Alabama law, and this Court’s numerous recent decisions consistently recognizing that an unborn child is a human being from the earliest stage of development and thus possesses the same right to life as a born person.”

This is not the first time that the Alabama Supreme Court has recognized the personhood of the pre-born child.

In 2014, in the case of Ex Parte Hicks, Chief Justice Moore wrote that “Under the Equal Protection Clause of the Fourteenth Amendment, states have an obligation to provide to unborn children at any stage of their development the same legal protection from injury and death they provide to persons already born.”

In the 2013 decision in Ankrom v. State of Alabama, the Alabama Supreme Court ruled that pre-born children were persons under the chemical endangerment laws, explaining that “the decision of this Court today is in keeping with the widespread legal recognition that unborn children are persons with rights that should be protected by law” the court added, “the only major area in which unborn children are denied legal protection is abortion, and that denial is only because of the dictates of Roe.”

In today’s momentous ruling, Justice Parker echoes these sentiments and calls on the Supreme Court to act.

“It is my hope and prayer that the United States Supreme Court will take note of the crescendoing chorus of the laws of the states in which unborn children are given full legal protection and allow the states to recognize and defend the inalienable right to life possessed by every unborn child, even when that right must trump the ‘right’ of a woman to obtain an abortion,” he said.

Gualberto Garcia Jones, Esq. is an attorney and the Policy Director of Personhood Alliance.