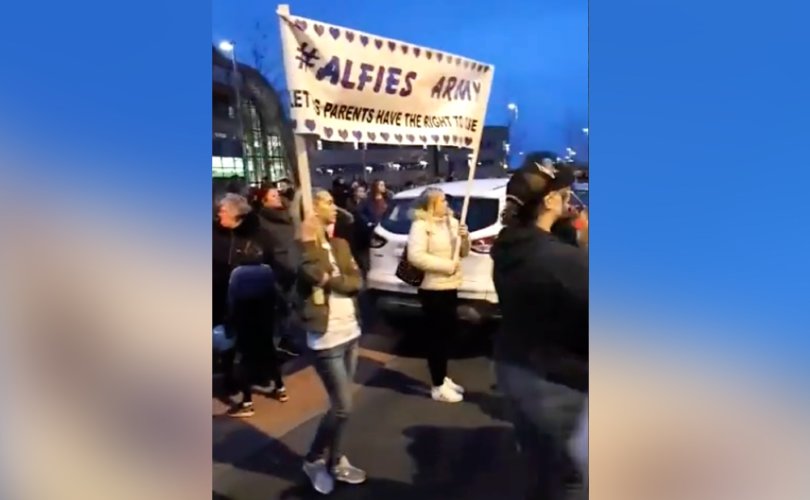 LIVERPOOL, April 12, 2018 (LifeSiteNews) – An army of Alfie Evans’ supporters has rallied outside the hospital demanding that it honors the parents’ decision to remove the baby from the hospital.

The supporters, dubbed “Alfie’s Army,” have gone as far as blocking the main road in front of the hospital until the baby is released. Some have made a roadblock with parked cars.

They are chanting, singing, and waving banners.

As LifeSiteNews reported earlier today, Alfie’s parents are saying that police are blocking them from leaving Alder Hey Children’s Hospital even though they have a legal document saying that their child is free to leave.

Read: Police block Alfie Evans’ parents from taking him out of hospital

Answering an online summons, dozens of supporters of infant Alfie Evans and his family have gathered outside the Alder Hey Children’s Hospital in Liverpool.

An event posted to the “Alfie’s Army” Facebook page directs members to gather across the road from the hospital. The protest officially started at 8:30 PM British Summer Time (BST).

Cars blared their horns as the crowd shouted “Release Alfie Evans” and “Save Alfie Evans.”

Supporter Shelley Fergusson said she was “delighted” by the support.

Margaret Murray of Scotland wrote, “We are and always will be Alfie's Army and I pray that God will make these people see sense. I pray that the Pope will intervene and get Alfie and you both to Italy for the treatment he deserves. I, for one, will never forgive or forget what Alder Hey have put you through. They are committing nothing short of murder. Sending you lots of love and hugs and I am praying that they eventually listen to you. Surely if a hospital will come and get him they have got to release him.”