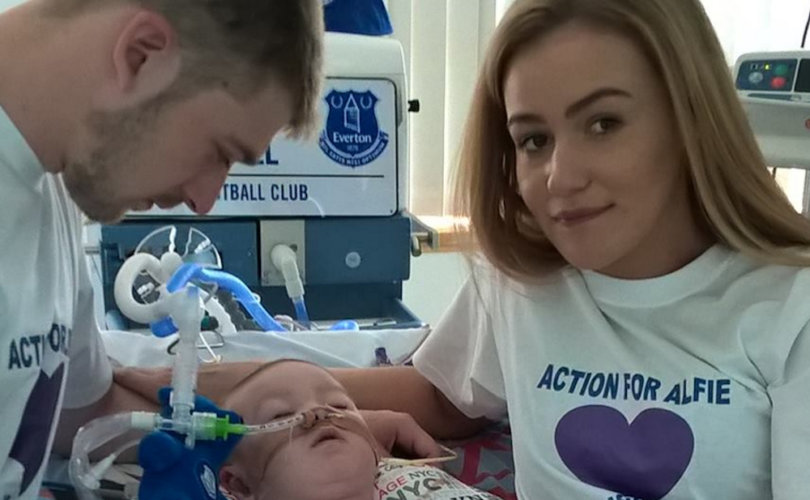 Correction: April 13, 2018 1:35 EST: Administration on Alfie Evans' official Facebook page “Alfies Army” are now correcting a press release from earlier this morning which stated that Alfie had been made a “ward of the court.” This report has been amended to reflect this update.

LONDON, April 13, 2018 (LifeSiteNews) – The parents of baby Alfie Evans still retain custody of their son after a press release by the family’s media coordinator this morning suggested that the child had become a “ward of the court.”

“The rumour that Alfie was made a ward of the court is false. Tom and Kate retain their parental rights,” Ferguson Shelly, an administrator on Alfie Evans' official Facebook page “Alfies Army” states.

Yesterday afternoon, Alfie’s parents Tom and Kate attempted to remove their child from Alder Hey Children’s Hospital in Liverpool after being assured that Alfie was neither a “prisoner” nor a ward of the court. They had a medical team prepared to transport Alfie to a plane standing by. Alfie’s family want him to receive treatment at the Bambino Gesù hospital in Rome. However, the hospital called police, who threatened to arrest Alfie’s father for assault if he took his son.

“Alder Hey hospital called in police to stop Alfie's transfer, locking all doors, setting off a fire alarm and removing all children from the PICU. This merely proves first that Alder Hey is acting in violation of parental rights, second that Alfie is indeed a prisoner if the police are being used and exit prevented, and third their tactics are simply hysterical,” states the press release.

Hundreds of “Alfie’s Army” supporters surrounded the hospital yesterday evening, demanding the release of the sick child. They blocked the roads for hours while allowing free passage of pedestrians and ambulances.

Later in the evening, Alfie’s dad told supporters that he had been threatened by police with arrest for so much as touching his son.

A court order was handed down Thursday, mandating Alfie be kept on life support until Monday, when the boy’s parents and legal team will again return to court in yet another attempt to keep their son alive. They will ask a Court of Appeal to allow their 23-month-old son to remain on life support and receive further treatment for his undiagnosed condition. They claim that Alfie has been illegally imprisoned (Habeas Corpus) by the hospital.

The parents hope to move their son to a different location so he can receive better treatment. The position of Alder Hey Children’s Hospital is that dying is in the child’s best interests.

“The family wishes to immediately move Alfie by air ambulance to the Bambino Gesu hospital in Rome, which has offered free care for the rest of Alfie’s life, including the comfort and health-enhancing standard tracheostomy and PEG feeding tube which Alder Hey refuses to give,” the press release states.

“The parents are delighted to accept the generous offer by the prestigious Carlo Besta Neurological Institute in Milan, putting a staff of 300 at Alfie’s service for directing comprehensive diagnostics. This will determine the course of Alfie’s future care and allow the family to put the long-denied questions and concerns to rest. After the diagnostics and resulting care plan are followed, Alfie will be able to be transferred to live at home with his parents.”

The family says Alfie does not need palliative care, “because he is not dying.”

“He has suffered injury to his brain of an undiagnosed origin, but he is improving as he grows and overdoses of sedating drugs are reduced.”

“We can only imagine what could happen when Alfie receives proper diagnostics and standard humane care, and the parents are prepared to love and care for their son in any case,” states the press release.