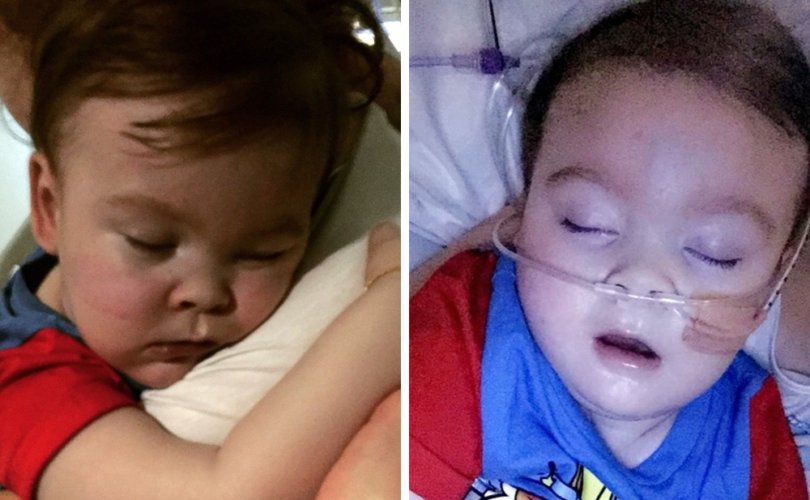 The infant, who has an undiagnosed neurodegenerative disorder, was removed from a ventilator yesterday at 9:17 PM British time and has been breathing for himself for the past 13 hours.

“He’s now on oxygen,” Alfie’s father Tom told reporters in a press conference outside Alder Hey hospital shortly before 7:00 this morning. Tom said that the “doctors are gobsmacked” that Alfie continues to live.

The child has also been permitted water.

This morning on Facebook, the child’s mother, Kate James, posted two photos of her son and announced: “Alfie has been allowed oxygen and water!! How amazing is he. No matter what happens he has already proved these doctors wrong. How beautiful does he look.”

Alder Hey Children’s NHS Foundation Trust, which earlier indicated that it would address the media at 7 AM, now says that it will not be making statements “out of respect for the privacy” of the child and his family.

Alfie Evans’ parents disagree with the hospital’s position that being removed from life-support is in their child’s “best interests.” They have fought a February 20 High Court decision that Alfie’s life-sustaining treatment should end through the British court system to the European Court of Human Rights and back.

The parents maintain that they want their son transferred to Rome’s Bambino Gesù hospital.

Yesterday the extubation, which by court order was to begin at noon, was delayed. Shortly afterwards, the Italian government extended citizenship to Alfie Evans, hoping that this would expedite Alfie’s transfer to Bambino Gesù .

But an application to Mr Justice Hayden, who made the February 20 decision and in April gave the hospital permission to remove Alfie’s life support, proved fruitless.

At a hearing in the Family Division of the High Court, the judge heard submissions from lawyers representing Alder Hey, Alfie’s parents and Alfie’s legal guardian via a phone link.

Paul Diamond, the parents’ lawyers, informed Hayden that Alfie had been made an Italian citizen and that the Italian government wanted to intervene in the case. Diamond indicated that there was now an “international relations element”.

However, Michael Mylonas, QC, Alder Hey’s counsel, said the gift of citizenship was immaterial to the case, as Alfie was clearly under British jurisdiction.

Hayden gave the order for Alfie’s ventilator to be removed that evening.

“I am not going to provide more time,” he said. “Alfie is a British citizen, he is undoubtedly habitually resident in the UK. He falls therefore under the jurisdiction of the High Court.”