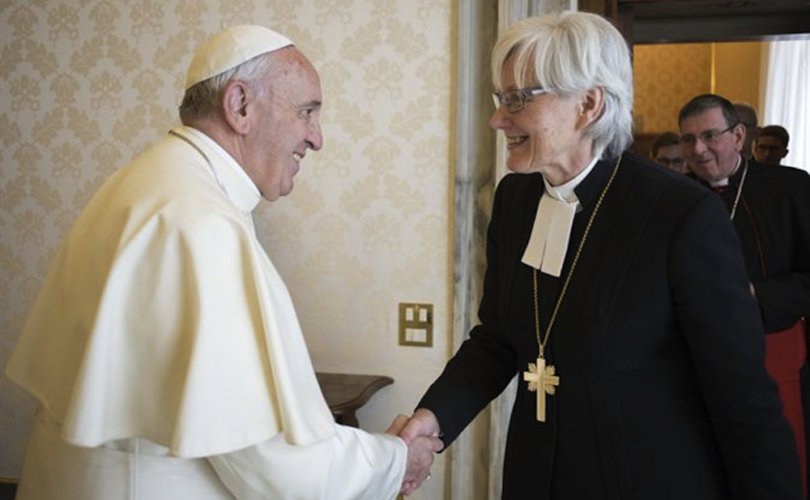 ROME, October 26, 2019 (LifeSiteNews) – The final document of the Amazon Synod calls for allowing women’s ministries at Mass, specifically saying that women can “receive the ministries of the Lector and Acolyte, among others to be developed.” While it does not specifically call for a permanent “diaconate” for women, it refers to the Commission set up by Pope Francis to study the question and says Synod Fathers will share their observations with the Commission and await the Commission’s report (para 103).

“It is urgent for the Amazon Church to promote and confer ministries for men and women in an equitable manner,” says the document (para 95). Quoting Pope Francis' exhortation Evangeli Gaudium, the synod document (para 99) calls for the Church “to create still broader opportunities for a more incisive female presence in the Church.” Quoting again from Pope Francis (from a 2013 speech), it says, “Let us not reduce the commitment of women in the Church, but promote their active participation in the ecclesial community.”

“The Magisterium of the Church since the Second Vatican Council has highlighted the leading place that women occupy within it,” says the document (para 100). And quoting Pope Paul VI, it adds, “The time has come, the time has come for the woman's vocation to be fully fulfilled, the time when the woman acquires in the world an influence, a weight, a power never reached until now.”

The document asks the Pope to create a specific ministry for women in the Amazon called “woman community leader.”

The synod document opens sore wounds in the Catholic Church where a modernist approach has for the most part prevailed among non-Latin (non-Extraordinary Form) parishes. The document basically calls for an official role for women for service at the altar which women already perform in most churches in the West.

More traditional Catholic churches, even within the non-Latin parishes (Ordinary Rite), have retained the practice of not permitting women’s “service” at the altar as lectors, altar servers, or (extraordinary) ministers of Holy Communion.

While the allowance for women’s service is widespread, the arguments against such a practice are remarkably authoritative both in the Scriptures and the writings of the Popes throughout the centuries.

St. Paul in 1 Cor. 14:34 writes: “Women should remain silent in Churches” – a law which was followed in the Church until various interpretations of the Second Vatican Council saw women reading the Scriptures at Mass but not the Gospel.

“Pope Gelasius in his ninth letter (chap. 26) to the bishops of Lucania condemned the evil practice which had been introduced of women serving the priest at the celebration of Mass. Since this abuse had spread to the Greeks, Innocent IV strictly forbade it in his letter to the bishop of Tusculum: 'Women should not dare to serve at the altar; they should be altogether refused this ministry.' We too have forbidden this practice in the same words in Our oft-repeated constitution Etsi Pastoralis, sect. 6, no. 21.” (Pope Benedict XIV, Encyclical Allatae Sunt, July 26, 1755, n. 29)

As to a suggestion for women “deacons,” Pope John Paul II stressed the impossibility of female “ordination” in the 1994 document Ordinatio Sacerdotalis:

Pope John Paul II also pointed to Our Lady as the definitive proof that women were not meant to be in ordained ministry for, as he suggested, were Christ to have chosen any woman in history for ordination it would have been His Mother. He said:

The fact that the Blessed Virgin Mary, Mother of God and Mother of the Church, received neither the mission proper to the Apostles nor the ministerial priesthood clearly shows that the non-admission of women to priestly ordination cannot mean that women are of lesser dignity, nor can it be construed as discrimination against them. Rather, it is to be seen as the faithful observance of a plan to be ascribed to the wisdom of the Lord of the universe.